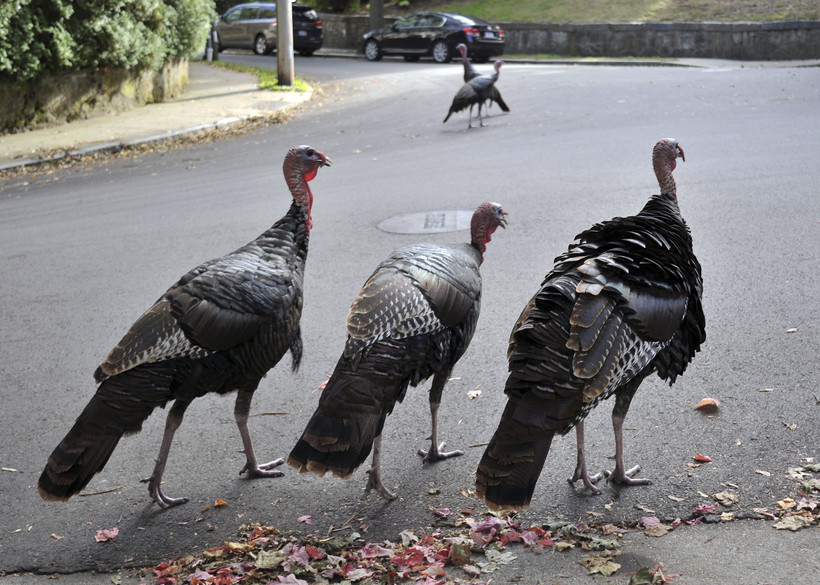 In this Sept. 27, 2017 photo, wild turkeys walk along a street in a residential neighborhood in Brookline, Mass. Wild turkeys have bounced back in New England in what's considered a success story for wildlife restoration. But as they spread farther into urban areas, they're increasingly coming into conflict with humans who say they ravage gardens, damage cars and attack people. Collin Binkley/AP Photo

Triumph of the turkeys: Wild birds flourish in Wisconsin cities and suburbs

After nearly being wiped out of Wisconsin, wild turkeys have repopulated their former habitats
By Sarah Lehr
Share:

When Audrey Evans works from home, a throaty warble is her soundtrack.

Her building for graduate students at the University of Wisconsin-Madison isn't air-conditioned, so during the warmer months, Evans likes to open the windows.

"I'll be working away at my computer, and I'll hear turkey noises," said Evans, who created the Instagram account "Turkeys of UW Madison" as a fan page dedicated to the urban birds. "It's always like the perfect opportunity to take a break and go look out my window to see the turkeys right underneath it."

More than a century after Wisconsin's wild turkey population was nearly gobbled up, the birds are flourishing. Now, many are even flocking to urban and suburban areas.

"For the most part, they have been restored to all of their former range, and then some," said John Kanter, a senior wildlife biologist with the National Wildlife Federation.

Wild turkeys were nearly gobbled out of Wisconsin

Wild turkeys, once abundant in the region, had been wiped out of Wisconsin by late 1800s thanks to a combination of unregulated hunting and the decimation of their former habitats by the timber industry.

For much of the 20th century, attempts to restore the birds to their former habitats were unsuccessful, in part because officials were trying to send birds raised in captivity out into the wild.

"They were trying to pen-raise them with domestic turkeys, and then release them, and they were finding out that they just behaved like pen-raised birds and didn't survive," Kanter said.

In the 1970s, Wisconsin's Department of Natural Resources negotiated a deal with Missouri's Department of Conservation to exchange ruffled grouse from Wisconsin for wild Eastern Turkeys from Missouri. After the wild turkeys took hold in Wisconsin, the DNR began trapping some of the birds and relocating them to other areas of the state where the conditions were right for them to thrive, said David Drake, a professor of forest and wildlife ecology at UW-Madison. 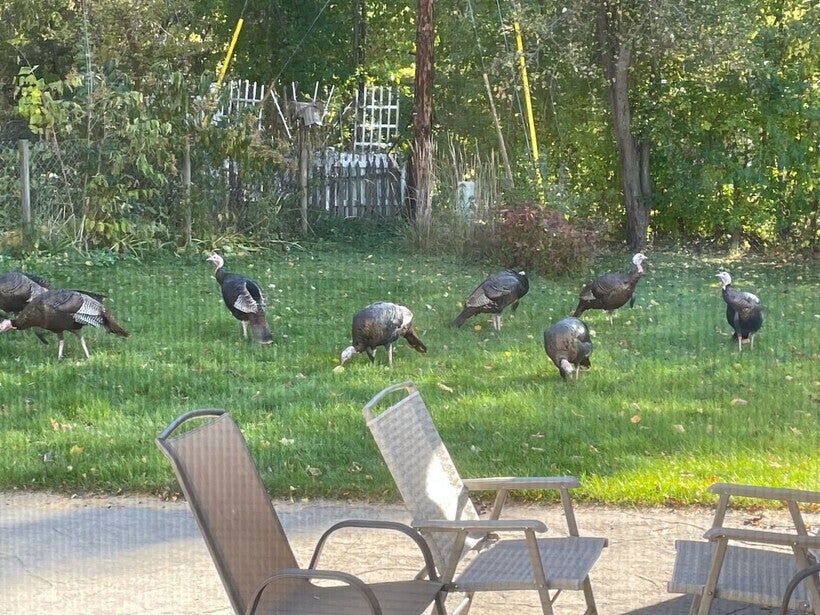 Even so, Drake said he's been surprised by the resiliency of wild turkeys. When he studied wildlife management decades ago, he was taught that turkeys didn't do well near large human population centers.

"A generation or two later, we're teaching our students that turkeys are very, very much of an urban species because they're very opportunistic, and they're very adaptable to that, you know, quickly changing human modified landscape," he said.

Turkeys favor forested areas that are interspersed with open spaces, and suburbs, with their abundance of athletic fields. Residential lawns and landscaped parks have proven ideal, Drake said.

Turkeys can also find plenty of their favorite foods — like insects, fruits, nuts and seeds from bird feeders — near where humans live, and they don't have to worry much about their natural predators.

For Evans, turkeys were a novelty when she moved to Wisconsin from Kansas to pursue a Ph.D. in electrical and computer engineering. The birds are ubiquitous in her Madison neighborhood known as Eagle Heights. Evans has come to see them as comical, but often ornery, neighbors.

"You can stand anywhere in this neighborhood and do a slow 360 and there's like 95 percent probability you'll see a turkey," she said.

Once, Evans and her roommate were chased by a wild turkey into their apartment. A photo of that encounter, showing a turkey butting up against the glass door of the building's common room, is posted to the Turkeys of UW Madison account.

"I think they're all bark and no bite, like they can't do much damage," Evans said. "But I had no idea that a turkey would be brave enough to chase down a full-sized human."

Wild turkeys are relatively large, with males that can weigh more than 20 pounds But Julie Widholm, a wildlife biologist covering Dane County for the DNR, says the birds pose little threat to humans.

Turkeys tend to be most aggressive during mating season in the spring. Occasionally, a male tom will see his reflection in a car door, and start pecking at his own image as if he's fighting a rival.

If you're bothered by turkeys in your yard, Widholm suggests removing bird feeders and other food sources for at least a few weeks. And if a turkey won't get out of your way, Widholm says you shouldn't be afraid to "stand your ground" by yelling, waving a broom or spraying the bird with a garden hose. 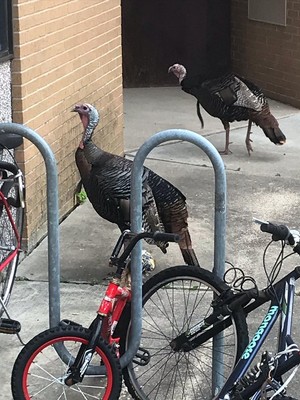 Wisconsin allows people to hunt limited numbers of turkeys in the spring. And, outside of hunting season, it's possible to request a permit from the DNR to allow for the removal of turkeys deemed to be a nuisance. That's typically because of complaints about turkeys chasing humans, disrupting traffic or causing property damage, said Brad Koele, the DNR's coordinator for wildlife damage.

This year, the DNR has issued 22 of those permits, which could allow for turkeys to be either relocated or killed, Koele said.

People can request the permits for the private residences or businesses and many are given to airports, because of concerns about turkeys disrupting planes, Koele said.

Only three of the nuisance permits were granted to municipalities in 2022. In the city of Wauwatosa, where the abundant so-called "Tosa turkeys" have a love-hate relationships with residents, the city used contractors to kill three "aggressive" turkeys before donating their meat to food pantries, the Milwaukee Journal Sentinel has reported.

Also this year, the city of Oshkosh killed four nuisance turkeys and donated their meat, and the village of Jackson obtained a nuisance permit but didn't end up removing any turkeys, Koele said.

Although the turkeys in her Madison neighborhood can be scrappy, Evans considers it a treat to be near the birds.

"I definitely have heard people talk about like, 'Oh, they're just such ugly birds,' or 'they're so messy,' or 'they're so dirty,'" she said. "I have to disagree. I don't take for granted how cool it is that we have this community where there are humans and these wild birds that coexist pretty peacefully."

Avian influenza is continuing to crop up in Wisconsin despite efforts to control its spread. The Department of Agriculture, Trade and Consumer Protection detected the highly pathogenic avian influenza, or HPAI, in eight birds in Marathon and 15 birds in Waukesha counties this week.

Inflation won't win Thanksgiving: Here's NPR's plan to help you save on a meal

There is an annoying guest at Thanksgiving dinner this year: inflation. The turkey, the stuffing, the cranberry sauce — everything has gotten a lot more expensive. The Farm Bureau puts the total...

In the image above, Frank Lyons feeds his huge flock of domestic turkeys on his farm in Verona.

For most Americans, no Thanksgiving dinner is complete without a turkey. But the turkey most of us enjoy has little in common with...