WPR News
Hear Me Out 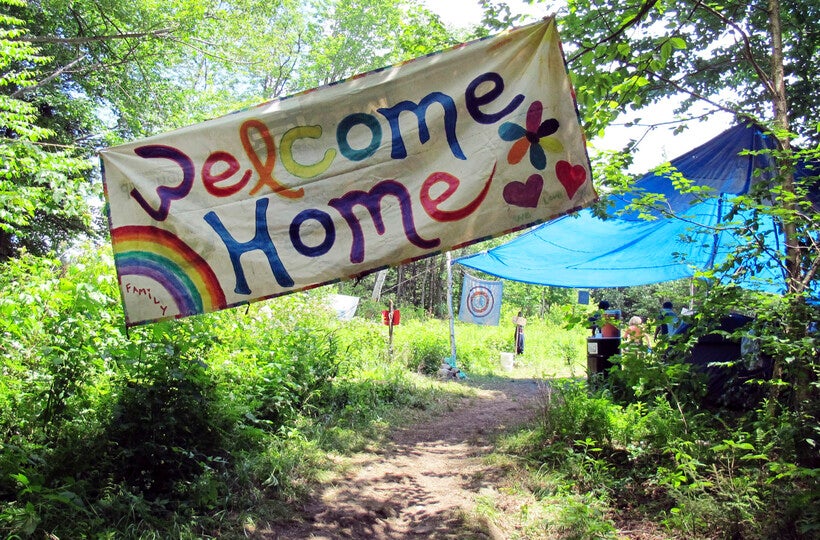 In this June 28, 2016 photo, a sign welcomes people to the gathering of the Rainbow Family of Living Light in Mount Tabor, Vt. People from across the country are flocking to the Green Mountain National Forest for the annual Rainbow Gathering of Living Light. Wilson Ring/AP Photo

US Forest Service, Law Enforcement Prepare For Up To 10K People
By Danielle Kaeding
Share:

Northern Wisconsin is preparing for up to 10,000 people from across the nation to gather in the Chequamegon-Nicolet National Forest this week. Forest officials say it’s the first time a group known as the Rainbow Family of Living Light has chosen Wisconsin as the site of its national gathering.

The Rainbow Family is a loose-knit group of people that have gathered every year in a national forest since 1972 to take part in creative and spiritual activities and pray for peace.

Hilary Markin, spokeswoman with the Chequamegon-Nicolet National Forest, said at least 2,000 people had already arrived on site as of Friday. The U.S. Forest Service is working with multiple law enforcement agencies to prepare for thousands more people during the event, which begins Monday.

"Any time you have this large of a gathering of people coming to an area, you do have public safety concerns for the health and safety of everyone in that area," said Markin. "We do have an incident management team. There is a law enforcement component to that where we're working with all the cooperating agencies."

Markin said the U.S. Forest Service is working with the Wisconsin State Patrol, Wisconsin Department of Natural Resources, Bayfield County Sheriff's Office and Iron River Police Department. She said the higher law enforcement presence is part of any large gathering where officials may be called to respond in case of an emergency.

Rainbow Family members just want to get together and promote a safe gathering, according to participant Adam Buxbaum, who also goes by the name Finch.

"I’m here to see all of my best friends and also to try and help make sure that all of the people that are coming into Wisconsin for this gathering have a smooth, safe and healthy gathering," he said.

Rainbow Family members alleged that they’ve been harassed by members of the U.S. Forest Service’s incident management team at past gatherings, including stops to conduct vehicle searches for drugs. Markin said law enforcement are patrolling the area to make sure that all visitors to the national forest are abiding by federal, state and local laws.

Markin added that the Rainbow Family has consistently refused to obtain a special use permit required by the U.S. Forest Service for any groups of 75 people or more using the forest. She said they work closely with members to ensure natural resources are protected in the area. Rainbow Family gatherers also work to clean up forest sites once the event is over.

Terry Pajtash with the Scenic Drive Resort in Delta said the influx of people is a good surprise, but a lot to take in.

Desarae Sipsas, who works at the Iron River Pizza Parlor, said the Rainbow Family members she’s met have been nothing but pleasant.

"They’ve been awesome in our restaurant," she said. "I have nothing bad to say about them at all."

The height of the gathering is expected to take place on the July 4 holiday when Rainbow Family members typically gather to meditate and pray in the morning. The gathering wraps up on July 7.