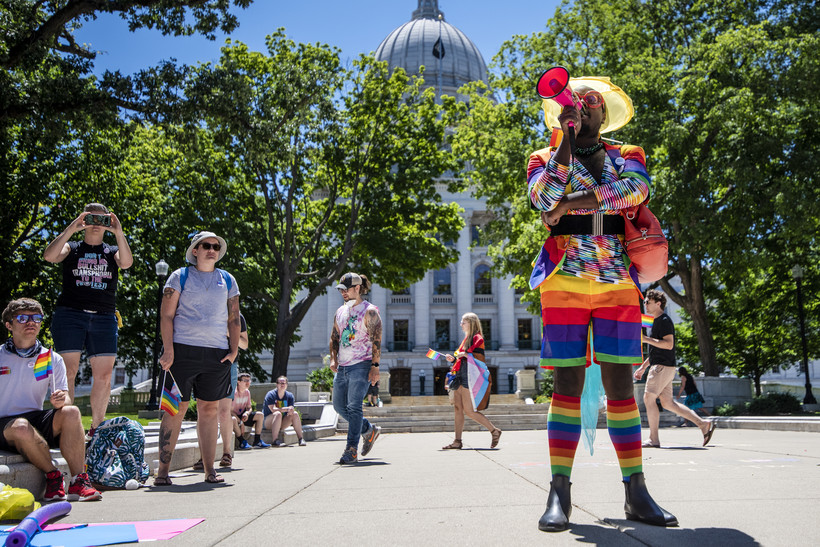 Sunshine Raybebow speaks into a microphone at the protest against bills to limit transgender athletes Wednesday, June 16, 2021, outside of the Wisconsin State Capitol in Madison, Wis. “I want this world to be a better place for young trans kids,” she said. Angela Major/WPR

After 50 years, tales about the Black Nite gay bar in Milwaukee felt like urban legend.

Historian Michail Takach said people at parties would ask Josie Carter to tell stories, such as when the then-young Black woman of trans experience and other bar patrons fought back against homophobic attackers on Aug. 5, 1961. He said people would dismiss what Carter shared as just some crazy story. 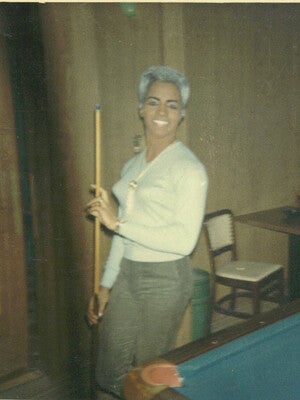 "That’s the greatest demonstration of why preserving and documenting this history matters so much," he added.

Takach, curator for the Wisconsin LGBTQ History Project, partnered with Radio Milwaukee on a six-part podcast series called "Be Seen," which he said is cementing the state’s LGBTQ history, giving it the platform it deserves before the stories are lost for good.

Back in 2008 when he first started on the history project, Takach said he still had access to an entire generation of people who were alive before the 1969 Stonewall Uprising in New York City.

But in the years since, so many have died — often, he said, taking their stories, experiences, perspectives and their wealth of knowledge with them. Parts of that history were disappearing every day. He also said there were substantial losses during the AIDS epidemic.

The history of that August night at the Black Nite bar was almost forgotten. Survivors later died. The building and its surrounding neighborhood were destroyed, he said.

"Everyone involved was scattered to the winds, and there was really nowhere to go to really understand what this place was, why it was so important to everyone and why they were willing to fight for it," he said Tuesday on Wisconsin Public Radio's "The Morning Show."

Takach said a barrier existed between young and old members of the LGBTQ community, which means "the generational passing down of cultural heritage" didn’t always happen. Time passes. Generations shift.

That’s why he said it was important to validate LGBTQ history with records and first-hand accounts before it becomes reliant on vague memories, half-truths or folklore.

The podcast, which started dropping weekly episodes May 23, starts with "Wisconsin’s first LGBTQ uprising," the Black Nite Brawl, as Takach said newspapers called it at the time. The other episodes are about when it was illegal to be gay, the state’s first drag show, notable women’s bars, the state’s longest-running gay bar and organizers responding to HIV and AIDS. 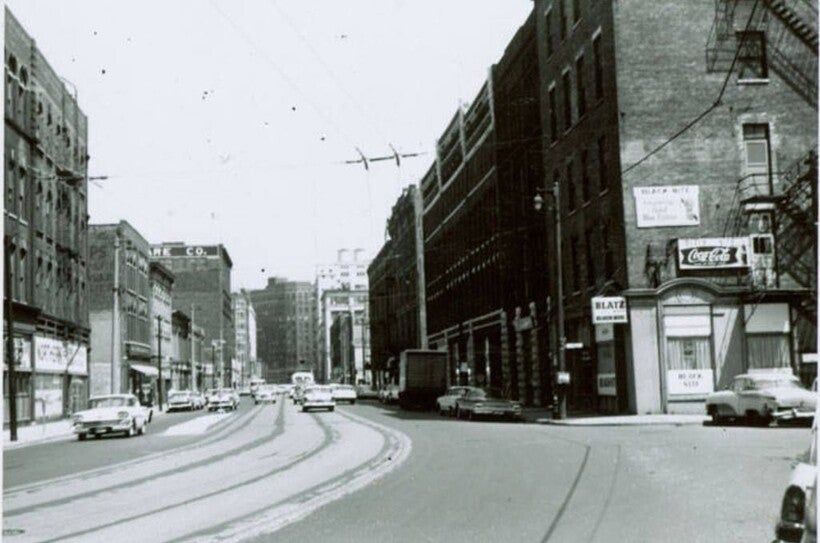 The Black Nite bar in 1961 at the 400 block of North Plankinton Avenue in Milwaukee stood out in the city because it was founded as a gay bar. Photo courtesy of Michail Takach

The history project first started as a table exhibit at Pride Fest, he said, growing from "this very small class project look and feel to the state’s largest repository of (LGBTQ) historical multimedia."

People don’t tend to gravitate toward history, he said. He wanted history to be more accessible and engaging, something with which people could connect emotionally. A podcast, he said, lets them "transform a static and valuable online resource into something that was really being delivered to people in an experiential way."

Carter, from the Black Nite story, died in 2014. People would pay Carter to show up at parties or bar openings. She was famous, always thought to be a good time, Takach said.

Takach said it was in a 2011 interview when Carter first really talked about the Black Nite, at least in a way she hadn’t before — 50 years later. 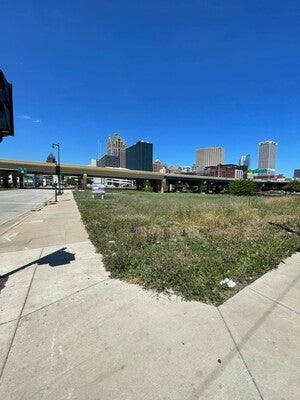 Where the Black Nite bar used to sit, in land that has been left vacant in Milwaukee for more than 55 years, according to historian Michail Takach. He said the bar was demolished for the construction of the St. Paul Avenue bridge. Photo courtesy of Michail Takach

"It was really life in their language," he said.

The Black Nite stood out because it was founded as a gay bar, while Takach said other bars in 1960s Milwaukee mostly just tolerated serving gay people — although there were technically laws against serving them. The bar became one of the most welcoming places for gay, lesbian and gender non-conforming people in Milwaukee during that time, he said.

Takach said the brawl on Aug. 5, 1961, was unprecedented, at least in Wisconsin, for how the LGBTQ community stood up against harassment, violence and homophobia. They fought back. While defending her boyfriend and the bar, Carter knocked one of the attackers out cold and sent them to the emergency room.

"It was legendary in so many ways," Takach said. "It changed the perception of gay people in Milwaukee from being docile, passive and pushover to scary and dangerous, like a sizzling undercurrent that was not known to be in Milwaukee."

Takach said LGBTQ people have been a part of Wisconsin’s history all along, no matter how the stories have been told.