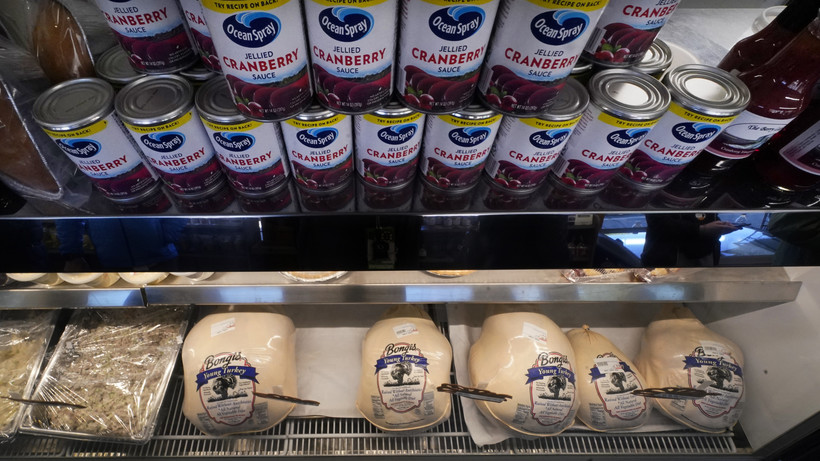 Thanksgiving food prices are up, but Wisconsinites see smaller increases due to proximity to farms

Wisconsin Farm Bureau survey found turkey prices were down slightly from 2021, but almost every other menu item saw an increase
By Hope Kirwan
Share:

Shoppers across the country have been warned for months that they can expect higher prices at the grocery store when shopping for this year’s Thanksgiving meal.

But an annual survey of grocery store prices by the Wisconsin Farm Bureau shows Wisconsinites have seen smaller price increases on average.

The informal survey of 15 common food items found the price of a Thanksgiving meal for 10 people rang in at $74.54, about 4.3 percent more than in 2021. Nationally, the average for the same meal was up 18.3 percent, coming in at $81.30, according to the American Farm Bureau Federation.

Cassie Sonnentag, media relations director for the Wisconsin Farm Bureau, said Wisconsin saw lower prices because of the state’s proximity to farmers at the center of the meal.

"A lot of hog farmers and turkey growers are located within the Wisconsin-Minnesota-Iowa territory," Sonnentag said. "So a lot of that food is taking less distance to travel, and therefore there’s less fuel and cost of transferring that. So that helps reduce the cost here in Wisconsin."

She said turkey prices were also up significantly in Wisconsin last year because of a limited supply of birds raised during the height of the COVID-19 pandemic.

The survey found the price of a 16 pound turkey in Wisconsin was almost a dollar less this year than in 2021, coming in at $27.52.

The American Farm Bureau’s survey found the average price was $28.96, an almost 21 percent increase over last year. But the U.S. Department of Agriculture released its own data recently that showed current turkey prices may actually be lower.

NPR reported that the American Farm Bureau’s survey was done in October, while the USDA's price check was done more recently, when most grocery store chains have put whole frozen turkeys on sale.

The USDA press release said in addition to inflation, prices for staple Thanksgiving foods have been impacted by the ongoing outbreak of the highly pathogenic avian influenza, Russia’s war on Ukraine and drought across the United States.

Almost every food item on the Farm Bureau’s survey increased in price, from russet potatoes to cranberries to cream. Only turkey, ham and frozen peas had a price decrease from 2021.

Sonnentag said it’s not just consumers who are feeling the effects.

The National Farmers Union released a report on the average farmer’s share of food dollars spent for a Thanksgiving meal this year. The annual report found that farmers only receive about 6 cents per pound on turkey and about $1.30 for potatoes retailing at $5.99. The farmer’s share of a 2 pound ham sold at stores for $12.98 was estimated at $1.