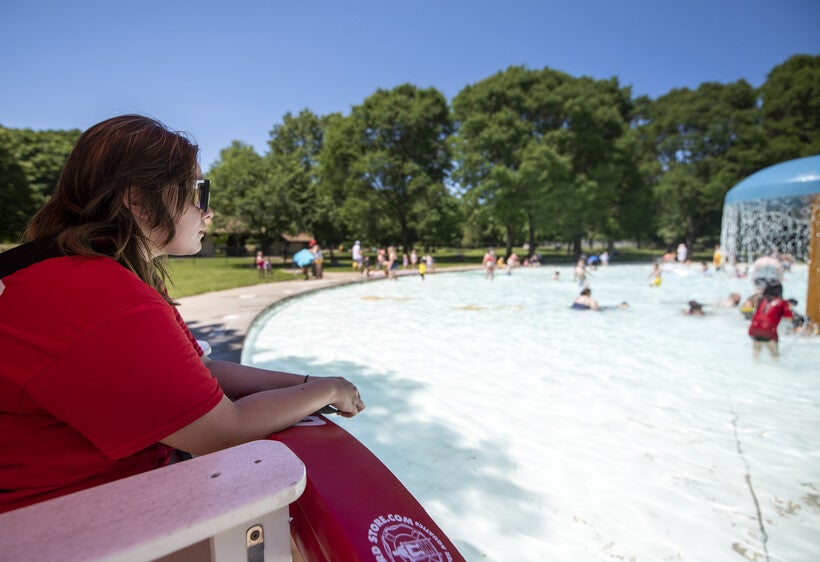 A new study showed extreme heat will hit the country over the next 30 years
By Leah Treidler
Share:

In the coming decades, the climate in the U.S. will heat up to potentially disastrous levels — and while Wisconsin’s long winters will turn milder, summer temperatures will hit record highs.

That’s according to a new study from the nonprofit research group First Street Foundation focusing on extreme heat events nationwide. Jeremy Porter, chief research officer of the Foundation, said climate scientists often warn temperatures will rise a few degrees on average in the coming decades, and to many, that doesn’t sound like much. But he said it spells out catastrophic heat.

"Today, about 7 million people are at risk of potentially hitting 125 degree heat index," he said. "And in 30 years, that number is going to rise to over 100 million people that are at that same risk. So you can see not only are the average temperatures changing, but the exposure to extreme heat events is also changing."

At those temperatures, the study said, railroad tracks will become wavy, airport tarmacs will melt and the joints in bridges will swell to unsafe levels.

Energy grids aren’t built to sustain the number of people who’ll be cranking up the air conditioning, Porter said, which could lead to blackouts. He also said emergency infrastructure isn’t set up to handle the coming heat waves.

While lowering greenhouse gas emissions is still the long term goal, Porter said cities and states need to prepare for the inevitable.

Temperatures in Wisconsin won’t match the extreme highs of states farther south, but Steve Vavrus, a senior scientist at the University of Wisconsin-Madison Nelson Institute's Center for Climatic Research, said the consequences will likely be worse.

"The places that have the greatest mortality during heat waves are not the hottest places," he said. "It's not Arizona and Louisiana that have the most heat-related deaths. It's places that are not accustomed to it, that don't have the infrastructure."

Cities and towns in Wisconsin aren’t built to withstand extreme heat, he said, and people here aren’t used to living in dangerously high temperatures. Not everyone has access to air conditioning, and bigger cities like Milwaukee don’t have enough tree cover and vegetation, creating urban heat islands, he added.

The state needs to build up its infrastructure to deal with the changing climate, he said.

"One thing we can do is provide more early warnings when we do have heat waves coming," he said. "And providing more public cooling shelters can be very effective, especially for people who don't have air conditioning. And checking in on vulnerable residents."

Older and socially isolated people are more at risk, he said. So are people of color and those in low-income areas — who he said are more likely to live in urban heat islands, work outdoor jobs — and people who live in certain parts of the state.

"In the far north, we have a lot of forests, and that has a natural cooling effect," Vavrus said. "And areas around the Great Lakes around Lake Superior and especially Lake Michigan, we expect to not have as many hot days as elsewhere in Wisconsin."

Southwest Wisconsin, though, lacks those buffers.

Data from First Street Foundation projects the temperature in Iron County will top 90 degrees for 15 days in 2052, up from nine days this year. In 2052, temperatures will hit that level for 34 days in Milwaukee, 42 days in Madison, and 47 days in Grant County, up from 32 this year.

Jeff Kindrai, the director and health officer for Grant County, said he’s already seeing the consequences of high temperatures, and the infrastructure to deal with heat isn’t there.

"We have a limited amount of cooling centers ... and the nighttime temperatures seem to be rising," he said.

Right now, the southwestern part of the state doesn’t have enough resources to shore up crucial infrastructure, said Jennifer Filipiak, the executive director of the Driftless Area Land Conservancy, which works to protect nature and agriculture in Southwest Wisconsin. Living in Lafayette County, she said she sees the consequences of rising temperatures up close.

"Our communities are rural," she said. "So we don't have the same infrastructure and the same resources that a bigger city like Madison might have, for example, to have cooling centers."

Most people work in agriculture, spending their time outside, she said, and most houses don’t have air conditioning. As temperatures rise, she said they’ll need to find ways to protect their farms and animals, or risk losing income.

"Things are changing, and we're having to adapt to those changes, and they're changing faster than our ability to adapt," she said. "And that makes it hard, but we'll do it. We'll adapt, we'll figure things out."