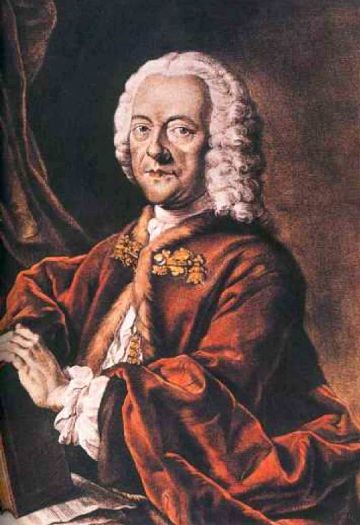 Composer George Philip Telemann had lived a long, productive life, but on the home front events had taken some unhappy turns. Telemann consoled himself with two loves--poetry and plants.

Telemann's unfortunate home life was publicized by a theater scandal that broke in Hamburg.  A play was being planned that would satirize three Hamburg celebrities, including Telemann.  The satire was aimed particularly at Telemann because his wife had been unfaithful to him and loved a Swedish officer.  When news of the planned production leaked out, Hamburg authorities put a stop to it.  But worse damage was to follow. Telemann's wife took his money and ran off with her lover, leaving Telemann in debt to the tune of 3,000 thalers--a huge sum of money in the 1750's.

Telemann was forced to rely on the charity of nearby friends. Some of them rushed to his assistance and covered a good deal of the debt.  Then he had to look to more distant friends. Maintaining his sense of humor, he sent a poem to one of them:

My fate now gives me generous reprieve,
Extravagance departed with my spouse.
Can I my debts from time to time relieve
And Paradise return to grace my house?
True, Hamburg rallies 'round me in my need,
With open hand, and charity has done.
Can friends beyond her walls perhaps be found?
Consoled!  I am meanwhile Thy Servant Telemann.

Among the most consoling responses of his friends was a gift of exotic plants that Handel sent from England.  Handel wrote: "I am sending you a present—a chest of flowers which botanical experts assure me are select and rare. If in fact they are telling the truth, you shall have the finest plants in all of England.

Telemann proudly added them to his own collection of rare tulips, hyacinths, buttercups, and anemones.

But Telemann's greatest consolation must have been his music, which included a vast output--twelve complete sets of cantatas, forty operas, six or seven hundred orchestral suites, 44 passions, plus concertos and chamber music. In fact, according the Guinness Book of World Records, George Philip Telemann is probably the most prolific composer of all time.