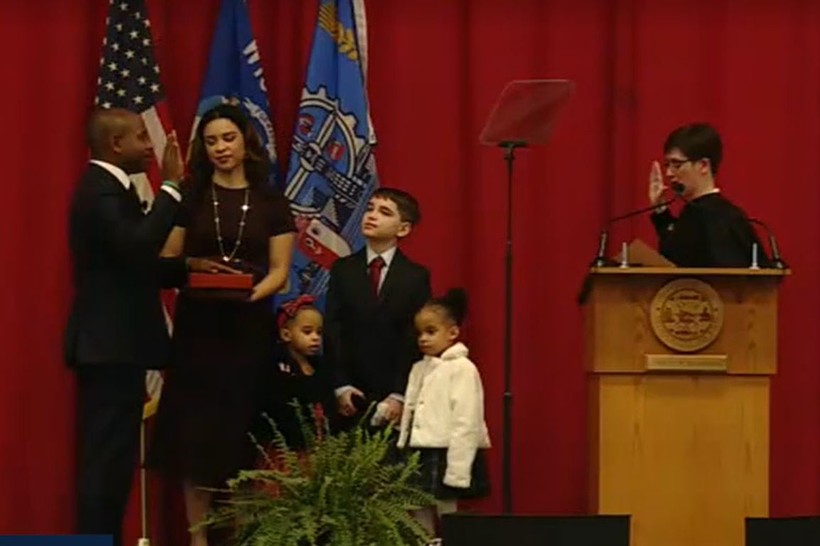 With his wife, Dominique and three children, Cavalier Johnson (left) is sworn in as acting mayor of Milwaukee, Thursday, Dec. 23, 2021. Image courtesy of Milwaukee City Channel

Shortly after being sworn into office Thursday, Milwaukee Mayor Cavalier "Chevy" Johnson said he will direct every city department to take steps designed to address what he called the "scourge" of reckless driving and rising gun violence in the city.

Johnson became Milwaukee's second Black mayor when he took office Wednesday evening as acting mayor, following the resignation of former Mayor Tom Barrett. In a swearing-in ceremony Thursday that included speeches by Milwaukee County Executive David Crowley and Johnson's fifth-grade teacher, Johnson talked about his background growing up in one of Milwaukee's poorest neighborhoods and he pledged to fight the pandemic and address the city's budget crisis along with public safety concerns.

Johnson, 35, grew up as one of 10 siblings. His father worked as a janitor for the Milwaukee Public School District and his mother as a certified nursing assistant. 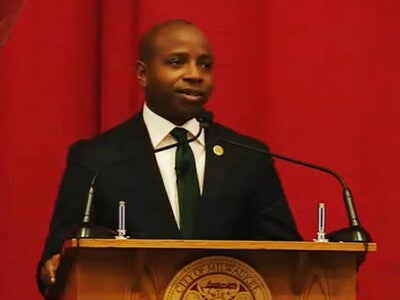 His comments on Thursday also included reference to the more than 190 killings in Milwaukee this year, the second year in a row that the homicide rate has increased. He said he will lay out plans with Milwaukee Police Chief Jeffrey Norman in coming weeks to address gun violence.

He also tied his own story to those of other Black families in Milwaukee.

"We all know as well as anyone that growing up in 53206, too many young black people don't get the chance to see beyond the stress, the trauma and the struggles in our neighborhoods," Johnson said, referring to the north side ZIP code. "I got off the block, and I've gone far, while always remembering where I came from. ... I know where my service began. I know the people in the neighborhoods, the teachers, the trials. I always wanted to be here, right here in our home, in our community, in Milwaukee."

A graduate of University of Wisconsin-Madison, Johnson is married with three children. He is just the fifth person to serve as Milwaukee's mayor in the last six decades. His predecessor, Barrett, held the post for nearly 18 years. Barrett left the office after being confirmed as U.S. ambassador to Luxembourg. Before him, Marvin Pratt served as acting mayor for several months in 2004 and became the city's first Black mayor. Pratt was preceded by John Norquist, who served for 16 years, and Henry Maier, who was mayor for 28 years.

The city will vote for its next mayor in the spring. Johnson is running, along with a crowded field of seven other candidates. Johnson's Common Council seat will also be up for election at the same time.

A former Barrett staffer, Johnson was first elected to the Common Council in 2016, and became council president in 2020. In 2018, he authored legislation banning "conversion therapy" for LGBTQ+ youth in the city.

Barrett appeared to have resolved one of the thorniest recent issues of city administration before handing over the reins. On Wednesday afternoon, Milwaukee's police union agreed to require that its members get vaccinated against COVID-19, or else wear masks at all times while on duty.