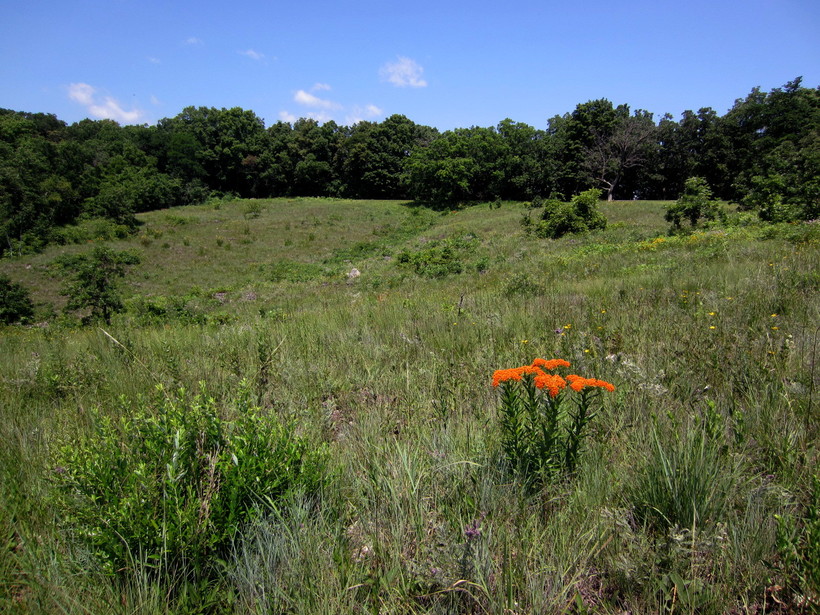 Dewey Heights Prairie State Natural Area in Nelson Dewey State Park, one of the prairies the team of researchers surveyed. A data sheet from John Curtis' survey of prairies from the 1950s. Scanned from University of Wisconsin archives by Amy Alstad A new survey of some well-studied Wisconsin prairie remnants shows that a number of native plant species there are continuing to disappear.

About 60 years ago, renowned University of Wisconsin-Madison Botany Professor John Curtis and some of his students did a survey of plants growing in hundreds of prairie remnants in southern Wisconsin. Thirty years later, researcher Mark Leach returned to those same sites to find that many of those species had disappeared.

Now, a team of researchers led by UW zoology graduate student Amy Alstad has completed a third survey. Alstad said the rate of plant species loss has tripled since Curtis's time to more than one species per year.

"The prairie landscape in wisconsin is losing its diversity of native grasses and wildflowers at an increasingly fast rate," she said.

For example, Alstad said, there used to be about a dozen types of milkweed found on the Wisconsin prairie remnants. Now, most have disappeared. Alstad noted that that particular loss is a significant one, given that milkweed plants are vital to monarch butterfly populations.

Alstad said that besides the decline of species, some of the remnants Curtis visited are no longer prairies. In some cases, non-native trees have grown. Alstad said that in another case, she found that a homeowner's yard expansion had engulfed some of the land Curtis had surveyed.

"The remnant prairie was now part of a mowed lawn," she said.

Alstad said that at yet another site, the prairie had been paved over: "It had been converted into a roundabout — one of those traffic circles."

Alstad acknowledged that she has only documented species loss at prairies Curtis and Leach surveyed. She said the plants can be found elsewhere — although at many sites, they may also be harder to find.

She said she hopes the new study leads to more prairie restoration. Some nonprofit groups and the Wisconsin DNR have been working on restoration projects.