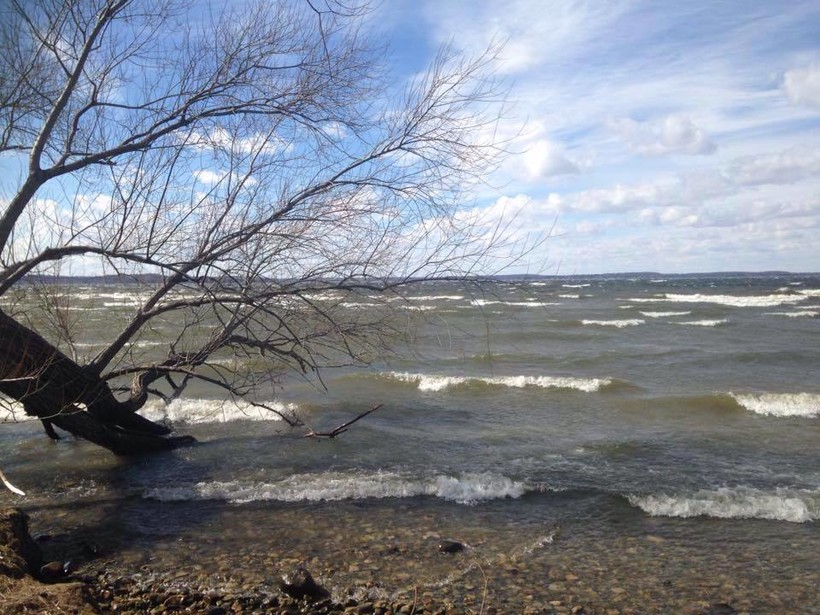 Coalition Of Great Lakes Mayors Finds Dozens Of Communities On The Hook For Millions In Damages Over The Next 5 Years
By Danielle Kaeding
Share:

Great Lakes communities in Wisconsin are estimating they will spend around $245 million over the next five years to repair coastal damage linked to climate change, according to a new survey from a group of Great Lakes mayors.

The findings are part of a larger survey conducted by the Great Lakes and St. Lawrence Cities Initiative that found 241 communities expect coastal damage from climate change will cost around $2 billion to repair over the next five years. Around $878 million has already been spent across the region in the last two years.

Those findings include responses from 48 communities in Wisconsin, estimating around $245 million in damage. The coalition of Great Lakes mayors says lakeshore communities across the state have already spent $86 million in the last two years.

The coalition’s executive director, Jonathan Altenberg, said they conducted the survey to better understand how shoreline communities are responding to challenges like erosion and planning for coastal resilience.

"It is truly a crisis, and this is not even a complete understanding because there's still other communities that have not responded," said Altenberg. "So, this is something we're looking to project, but the damage could be much greater."

The coalition detailed the average costs of coastal damage in Wisconsin based on the survey’s findings:

Ports and marinas accounted for the most damage amounting to $52.4 million. Water infrastructure damage accounted for $42.7 million while damage to coastal shorelines made up $35.2 million. The coalition did not release specific details regarding estimates from communities, citing confidentiality agreements.

In recent years, Great Lakes water levels have surged to record highs. The lakes fluctuate between swings in high and low water levels that are driven by changing temperatures, rain, snow and evaporation rates. Researchers have said the lakes tend to see the strongest swings during changes in precipitation or evaporation.

Water levels are easing, and they’re expected to remain below record highs seen last year. Despite that, the U.S. Army Corps of Engineers says water levels on the Great Lakes remain above their long-term monthly averages, except for Lake Ontario.

"There's much more drastic movements from high levels to low levels, but the high levels are particularly damaging and eroding our coasts, taking our beaches away, destroying coastline, buildings, infrastructure, like water intake, park land, city property," said Altenberg. "It is getting pretty bad."

Altenberg said the cost of coastal damage highlights the need for more assistance from the federal government. The coalition would like to see $2 billion devoted to shoreline communities in the region under the infrastructure bill being debated in Congress. Democratic Senate Majority Leader Chuck Schumer is urging a bipartisan group of lawmakers to finalize the proposal, so the Senate can begin considering the legislation next week.

"Communities around the Great Lakes face a growing crisis, and we need both the Federal Governments of the U.S. and Canada to assist with the necessary investments," said Milwaukee Mayor Tom Barrett in a statement earlier this month. "Our coastal infrastructure is vital to the economic and recreational health of our communities, and coordinated action is required."

Southeastern Wisconsin experienced at least $30 million in damage due to severe storms in January last year that degraded dock walls and damaged rail infrastructure at Milwaukee’s port, according to port director Adam Tindall-Schlicht.

He said the port would not have been able to repair the majority of infrastructure without assistance from the Wisconsin Harbor Assistance Program and funding from the Federal Emergency Management Agency. He estimated that nearly 90 percent of the storm damage has been repaired.

"But, we also know that other areas around the port and across southeastern Wisconsin and across the Great Lakes Basin haven't yet been able to secure necessary state and federal funds to move forward with their remediation effort," said Tindall-Schlicht.

He said that includes damage to a breakwater at South Shore Park, which is operated by Milwaukee County. The county is appealing to FEMA for funding to pay for repairs.

At the port alone, Tindall-Schlicht said they’re anticipating $250 million will be needed at the port through 2070 to extend the life of port infrastructure or modernize it.

"Not withstanding the fact that water levels are currently decreasing, the cyclicality of Great Lakes water levels and how that is going to be impacted by climate change really is going to be an enduring threat for not only port Milwaukee but all coastal communities throughout the state," he said.

High water levels and storms have caused flooding, erosion and damage from southeastern Wisconsin to Green Bay to the south shore of Lake Superior.

The federal bipartisan infrastructure bill includes $47 billion for upgrades to coastal resilience and other projects to reduce the impacts of severe weather.