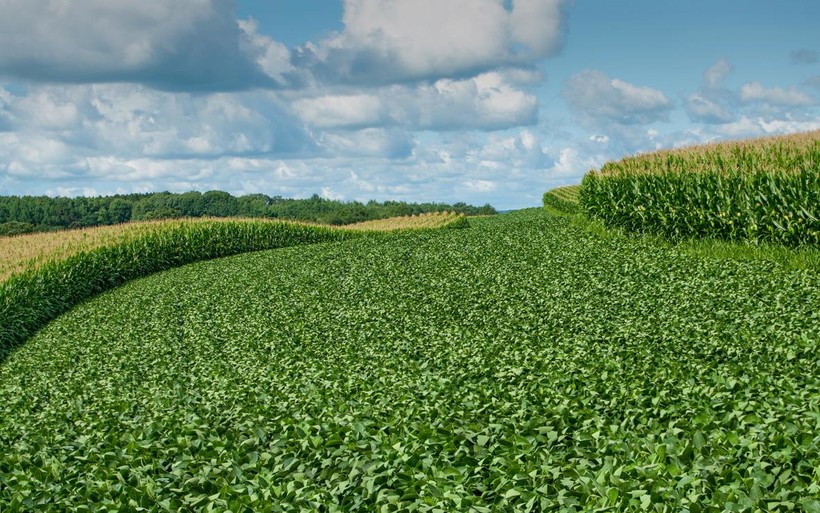 Survey: Wisconsin farmland worth 10 percent more than in 2020

A survey of Midwest farm bankers found Wisconsin farmland values are up 10 percent from the same period in 2020.

The Federal Reserve Bank of Chicago surveyed 151 bankers in their district, which includes Iowa and parts of Wisconsin, Illinois, Indiana and Michigan. 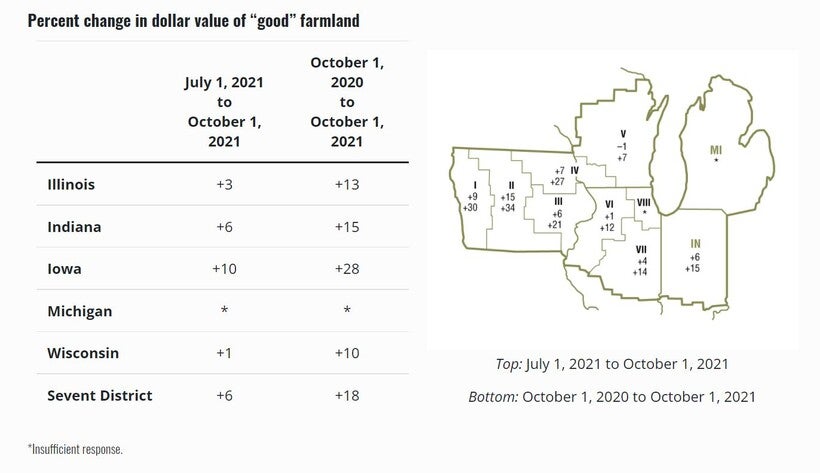 Courtesy of the Federal Reserve Bank of Chicago

David Oppedahl, senior business economist for the Federal Reserve Bank of Chicago, said the value of land started increasing last fall as the agriculture industry recovered from the initial shocks of the COVID-19 pandemic.

"Over the past year, there have been additional increases in income from both government support programs as well as higher prices for a lot of commodities. So it's really helped to shore up the finances and provide extra income that's being used, as well as low interest rates to help support farmland values," Oppedahl said.

Oppedahl said the state’s farm industry includes a wider variety of commodities, meaning land values aren’t as closely tied to corn and soybean prices. He said that also means Wisconsin didn't see as large of a decline in land values in recent years when those prices fell.

"The more diverse nature of agriculture in Wisconsin and the desirability of areas for rural living have made Wisconsin’s farmland retain its value a little more," Oppedahl said. "Wisconsin hasn’t increased as rapidly because it's already at a relatively high level compared to its historical averages."

Mike Morris is vice president of appraisal at farm lender Compeer Financial. He said the numbers reported in the Federal Reserve survey may even be a conservative estimate of the demand that his appraisers are seeing in Wisconsin.

"If you're looking at pasture, even recreational part-time farms, through the central part of the state on down to the southeast, there’s been a probably 10 to 15 percent increase in some of those areas. So we’re definitely seeing a really strong uptick in not just farmland but any type of rural properties," Morris said.

Morris said southwest Wisconsin in particular has seen enormous growth in land values, increasing 25 to 30 percent over last year. He said values started to jump up around June of this year and there continues to be upward pressure in that market.

He called the current market "the perfect storm" of demand for rural property from farmers, those looking to hunt or participate in other recreational activities and people looking to get out of the city in reaction to the pandemic.

"People wanted to get out of the town, find a place that's a little more secluded, a rural area and so forth. But I think really the big driver on land values has been commodity prices," Morris said. "Especially as you look at the southern part of Wisconsin, through Illinois, through Iowa, through southern Minnesota, that’s really been driven strongly by corn and soybean prices."

Morris said one thing that has surprised him about the current market is the increasing volume of properties coming on the market over the last year.

He said normally, more supply would dampen values. But that hasn’t happened so far.

"The demand is so great that it continues to bring supply out of the market if you will," Morris said. "I think part of that is the buyers are seeing what they feel like could be a long-term, strong commodity price base. Sellers are saying, ‘Yeah, I've never seen this kind of value. Maybe it's a good time to go ahead and liquidate my property.’ And I think there is some concern about what capital gains tax could be (in 2022)."

Like Oppedahl, Morris thinks farmers' higher incomes as a result of the government’s pandemic-related programs have also helped add to the market’s "perfect storm."

The Federal Reserve’s survey found that repayment rates of non-real estate farm loans were higher in the third quarter compared to the same time in 2020. It's also the fourth consecutive quarter that bankers have reported higher repayment rates. Survey respondents also reported fewer loan renewals and extensions, another sign farms are able to pay back their loans on time.

The survey found it’s also the fifth consecutive quarter that demand for non-real estate farm loans has been lower than the previous year.

Morris said the current financial strength of the agriculture sector means demand for farmland isn’t likely to decline the rest of this year and into 2022.

For farmers that aren’t looking to sell, that means fewer opportunities to buy land at an affordable price. But for those producers that are thinking about retirement or succession planning, Morris said it could be a profitable time for them to make a move.

"They're going to have a strong opportunity to lease or rent that farm out. There's also strong selling opportunities," Morris said.

As of Oct. 1, when the survey was taken, 68 percent of surveyed bankers expected farmland in the region to increase in price in the fourth quarter of this year. The remaining respondents all thought values would remain stable.

Oppedahl said that Wisconsin bankers were a bit more conservative with their predictions, with 73 percent expecting prices to be stable and only 27 percent of survey respondents expecting continued increases.