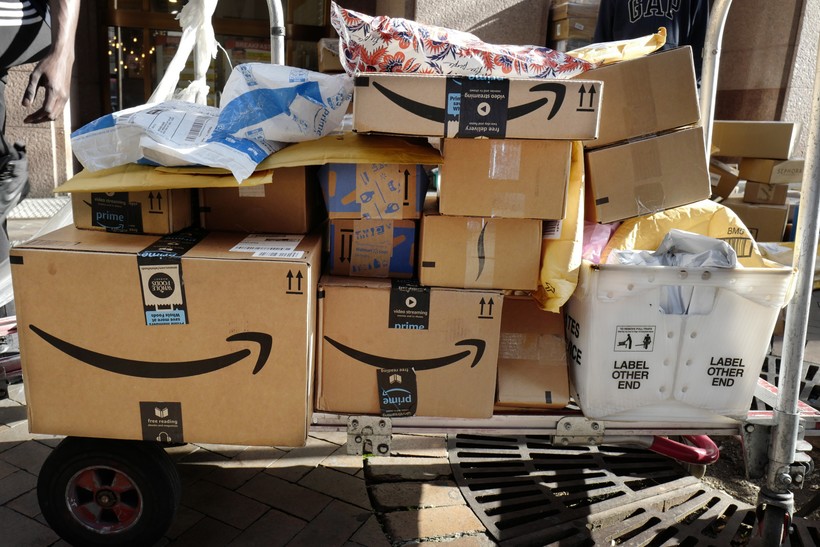 In this Oct. 10, 2018, file photo Amazon Prime boxes are loaded on a cart for delivery in New York. Slow shipping times and sold out items have plagued Amazon since the coronavirus pandemic caused a rush of orders from home-bound people. Mark Lennihan/AP Photo

Months of social distancing to slow the spread of COVID-19 led to a surge in online sales, but it won't offset Wisconsin's state budget woes.

According to a new report by the Wisconsin Policy Forum, online sales tax revenue increased by 133 percent in April compared to the same month a year ago. By contrast, other sectors like clothing stores, hotels and restaurants saw their sales plummet.

While other states will be able to use online sales tax revenue to offset budget shortfalls, that won't be the case in Wisconsin, where state law requires the money to go toward an income tax cut.

"What means is that income taxpayers would potentially see a much greater decrease in … the rates for the two lowest income tax brackets," said Jason Stein, research director for the Wisconsin Policy Forum. "And the state budget would see a corresponding hit at a time when obviously there are already pretty big concerns about the state budget."

What set Wisconsin apart is that even before the decision, it had a law on the books requiring that any increases in sales tax revenue to out-of-state businesses with no presence in Wisconsin be used to lower income taxes. It expanded on that requirement last year.

Stein said Wisconsin's law may be the only one like it in the country.

"From what we could see, Wisconsin was unusual or even unique in how it ties income tax cuts explicitly to these particular sales tax revenues," Stein said.

It's still unclear how bad Wisconsin's budget situation will be as the state nears the conclusion of the current fiscal year on June 30. Overall state tax revenue fell sharply during the early days of the coronavirus crisis, but a broader picture won't be known until after the extended income tax deadline of July 15.

Gov. Tony Evers said in an April letter to the Trump administration that the state faced $2 billion in revenue losses, although he told The Cap Times last week that he believed the state would not need a budget repair bill.