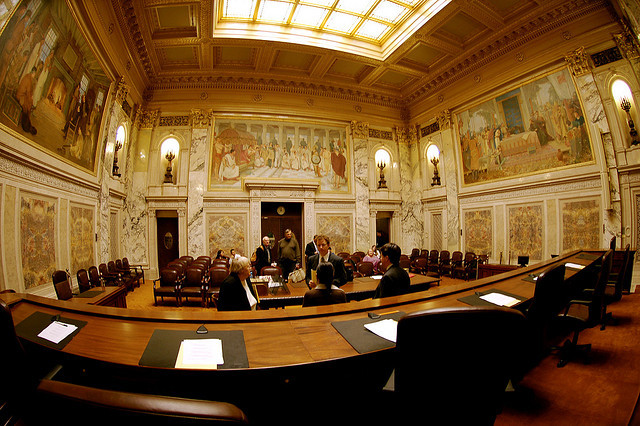 The Wisconsin Supreme Court has ordered the prosecutor in a now-closed investigation into Gov. Scott Walker's recall campaign to cease his duties, even as he weighs an appeal to the U.S. Supreme Court.

The court denied a request to reconsider the decision that shut down the investigation known as "John Doe 2," which looked into whether Gov. Scott Walker's recall campaign illegally coordinated with conservative groups. It had previously ruled in July that such coordination is legal in Wisconsin.

In their latest ruling released Wednesday, justices also ordered Special Prosecutor Francis Schmitz removed from the case on the grounds that he never should have pursued it in the first place.

Schmitz said in a statement issued after the decision that he continues to believe the investigation was justified, and if he has the resources, he intends to pursue an appeal before the U.S. Supreme Court. He had harsh words for the groups investigated in this case, saying he had underestimated the power and influence special interest groups have in Wisconsin politics.

"My career in the military and as a federal prosecutor fighting violent criminals and terrorists did not fully prepare me for the tactics employed by these special interest groups," Schmitz said.

Practically speaking, the court's action Wednesday — especially the unusual step of removing Schmitz from the case — makes any appeal to the U.S. Supreme Court especially difficult. Marquette University law professor and former Supreme Court Justice Janine Geske said Schmitz may believe such an appeal has merit, but under the court's ruling, that may not be his call to make.

"I think it's an authority issue of representing the parties, and I think the Supreme Court has removed him," Geske said.

While Justices left the door open to a possible U.S. Supreme Court appeal by other lawyers connected to the case, Geske said it would be a huge undertaking.

"They have basically left the Government Accountability Board without a lawyer at this point, and somebody has to move quickly to meet all the time limits," Geske said.

A spokesman for the Government Accountability Board said yesterday that the GAB doesn't have standing to file an appeal on its own. The Milwaukee County District Attorney, which had also been involved in this case, referred questions to Schmitz.

Geske said the Court had created a confusing mess with other aspects of the ruling, including its mandate that copies of some of the evidence in this case be preserved for ongoing lawsuits.

"They haven't done a service to anybody, I think, by writing this," Geske said.