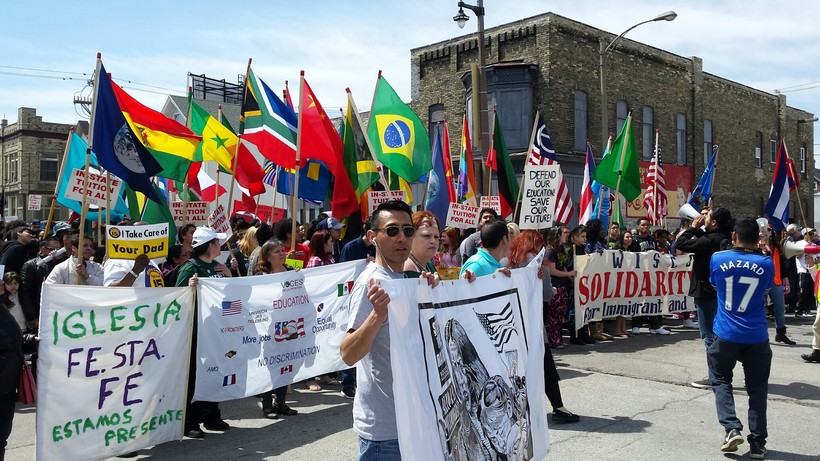 Immigrants and supporters of immigrants' rights march in last year's May Day parade in Milwaukee.

Supreme Court Ruling On Immigration Would Be Felt In Wisconsin

High Court Has Announced It Will Take Up Obama's Executive Action
By Gilman Halsted
Share:

More than 30,000 Wisconsin immigrants would be affected by the U.S. Supreme Court's ruling in a lawsuit challenging President Barack Obama's executive action on immigration. The high court announced Tuesday morning it would take up the case.

Wisconsin, along with 25 other states, is part of the challenge to Obama's Deferred Action for Parents of Americans and Lawful Permanent Residents, also known as DAPA. The states argue that Obama's action represent an executive overreach that would require them to pay public benefits to illegal immigrants.

Twenty-three-year-old Cendi Trujillo of Milwaukee said that if the court upholds DAPA, her undocumented parents would no longer have to live in fear.

"Both my parents drive to pick up sister from school, to buy groceries, to go to work — and that's something we fear," said Trujillo. "They might get pulled over and the officer will ask them about their immigration status, and then that may put their living here in jeopardy."

While supporters of DAPA say it will allow Wisconsin immigrants to come out of the shadows and work legally to support their families, Dave Gorak of the Midwest Coalition to Reduce Immigration says there are already too many U.S. citizens without work.

"With so many millions of Americans who cannot find full time work, you don't give millions of work permits to people who shouldn't be here in the first place," said Gorak.

The Supreme Court said it will hear the case in the spring and rule by the end of June on whether the DAPA program violates the Constitution.

Meanwhile, immigrant rights advocates from the group Voces de la Frontera will rally at the state Capitol Wednesday against three Republican-backed bills that would make it easier to deport undocumented immigrants.

One would bar cities from granting municipal ID cards to undocumented immigrants. Another would prevent cities from passing ordinances barring police from asking criminal suspects or crime witnesses about their citizenship status. The third would allow police to impound someone's vehicle if they are caught driving without a license.

Opponents of the latter bill say that since undocumented immigrants can't get drivers licenses, the measure would make it hard for them to get to work.