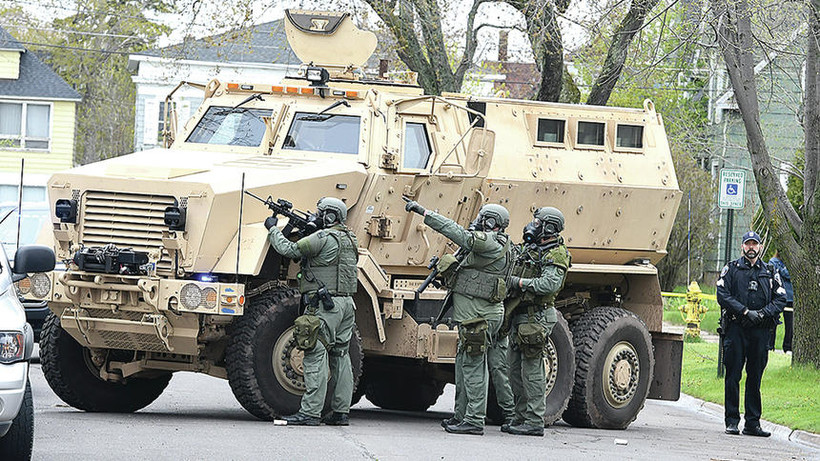 In this photo from May 2017, the Superior Police Department’s MRAP is used during an incident in the city.

Superior and Madison police plan to use smaller, armored emergency vehicles to replace mine-resistant vehicles on loan from the U.S. Department of Defense. Officials say the smaller vehicles are easier to maintain and more appropriate for law enforcement than military vehicles.

Mine-resistant ambush protected vehicles or MRAPs are designed for use by the U.S. military to withstand attacks from improvised explosive devices (IEDs). The DOD has transferred armored vehicles and other excess military equipment to law enforcement agencies through its Law Enforcement Support Office, known as the 1033 program.

Superior Police Chief Nick Alexander said his department received an MRAP several years ago, which kept officers safe in volatile and potentially violent situations. However, he said it also drew comments about the militarization of police.

"I heard from citizens that they didn’t view it as an appropriate piece of equipment for the police department — that they thought we were overdoing things when we had that type of vehicle out," he said

He said perception among community members combined with issues related to maintenance prompted him to seek other alternatives.

"It’s really designed to take a small number of troops, sort of seal them up inside and then drive through a hostile area and allow them to survive if there’s small arms fire or improvised explosive devices that they drive over," he said. "Stuff that civilian police use armored vehicles for, it needs a lot more capacity to carry people, easier access to get in and out. It needs to be a little bit more nimble and flexible for maneuverability."

Wahl said the MRAP is much larger and heavier and more difficult to maintain.

"The MRAP we got from the military, but you can’t go down to the auto parts store and get spare parts for it," Wahl said. "As things break down or as there’s issues with it, it becomes more and more challenging to keep it up and running and maintain it."

Alexander agreed, they’ve also had difficulty finding replacement parts and have had to fabricate parts at times.

Jim Palmer, executive director of the Wisconsin Professional Police Association, said he’s aware of a few agencies who have decided to downsize their vehicles in part because of high maintenance costs.

"Some of the larger armored vehicles are very difficult on the roads ... Then, there are other agencies who are clearly trying to be more sensitive to the environment in terms of how some people feel about the over-militarization of law enforcement throughout the country," Palmer said. "The few agencies that are downsizing, I’m sure they’re very cognizant of that."

However, Wahl said the conversation surrounding militarization of police and public perception of law enforcement hasn’t played a role in MPD's decision to move to a smaller armored vehicle.

"Who we hire, how we train them, how we engage the public, how we treat people are much, much more important than having an armored vehicle and what kind of vehicle you have," he said.

Madison hopes to take its MRAP out of service in the next week, while Superior hopes to have a new vehicle by the end of the year. Both departments say the vehicles will go back to the program and may be transferred to other law enforcement agencies.

"In most cases, these vehicles are valuable resources," said Palmer. "The fact that we can get them through the federal government at a discounted rate that is a good program."

Alexander said a $250,000 grant from the state allowed the Superior Police Department to afford the purchase of another vehicle. There are 36 mine-resistant vehicles in Wisconsin, according to a spokeswoman with Wisconsin Emergency Management.