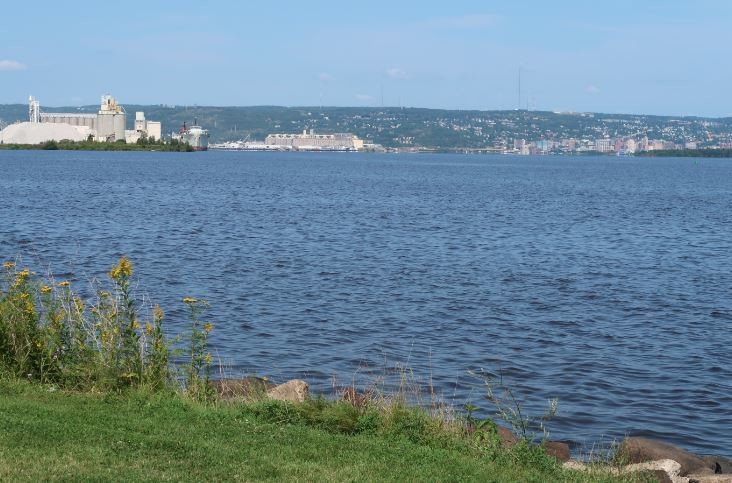 The majority of cargo moved through Great Lakes ports in Wisconsin — around 22 million tons — came through the Port of Superior, says Jason Serck, the city's economic development, planning and port director.

More Than 7,400 Jobs Supported By Maritime Commerce In 2017
By Danielle Kaeding
Share:

Great Lakes ports in Wisconsin have a $1.4 billion economic impact and support 7,484 jobs in the state, according to a new study.

The findings were presented at the annual meeting of the Wisconsin Commercial Ports Association in Superior on Thursday.

The ports of Superior, Green Bay and Milwaukee were among Great Lakes ports analyzed in the study, titled "Economic Impacts of Maritime Shipping in the Great Lakes-St. Lawrence Region." The report was conducted by economic consulting firm Martin Associates and commissioned by marine industry stakeholders.

Adam Schlicht, director for the Port of Milwaukee, said business at the ports has been growing with the stronger economy.

"The 2017 season was one of the best seasons that we've had on the Great Lakes in a long time," he said. "If the world economy is in a slump, as we were in that 2008-2009 timeframe, so was Great Lakes shipping. The economy worldwide is rebounding and so is the Great Lakes."

The study said that the Great Lakes ports in Wisconsin moved around 27 million metric tons of cargo last year. The majority of that cargo — around 22 million tons — moved through the Port of Superior, says Jason Serck, the city’s economic development, planning and port director.

"We're kind of the heavy lifters over here," said Serck. "We also do about 22 million of about 35 million in the Duluth-Superior port."

The study also found the aging Soo Locks account for about 17 percent of that impact on the state. Serck said that underscores the need for another large lock at Sault Ste. Marie, Michigan, to keep business running smoothly.

"If that Soo lock goes down, the large portion that supports the 1,000-foot vessels, we're talking about potentially the loss of 1,000 jobs and over $230 million worth of investment or cargo movement," he said.

The issue of funding to repair aging infrastructure is among some of the top concerns for the state's Great Lakes ports, as well as dredging and preventing the introduction of new invasive species.

"There's some regulatory challenges that we kind of seem to go up against once in a while, whether it be ballast water, which I really think we're on a great track for," said Serck. "A majority -- 99 percent of the invasive species are met at the mouth of the (St. Lawrence) Seaway. There’s a system called swish and spit that's done in the ocean that kills a majority."

However, researchers have recently discovered new invasive species in the Great Lakes that were previously unseen. Scientists have recommended research of ballast water treatment methods for ships while members of the shipping industry say more information is needed before implementing new ballast water policies. The Lake Carriers Association has said it may cost hundreds of millions of dollars to modify its Great Lakes fleet with treatment systems.

In addition, policy changes at the federal level have the potential to help or harm Wisconsin ports. The Trump administration's tariffs might boost iron ore cargoes moving out of the ports, but it may also hurt exports of other products like grain.

"Sometimes it takes a while for these to kind of adjust and we may not see that until next year or the year after because these economic swings just don't happen overnight," said Serck. "We’re hopeful. Hopefully, these numbers will go up. I think the latest report just came out that we’re above last year on some of our exports out of here so that’s a good thing."

Plus, the nation's relationship with its northern neighbor, Canada, figures prominently for the success of Wisconsin ports and Great Lakes shipping.

Ports have been working to diversify cargoes, says Dean Haen, president of the Wisconsin Commercial Ports Association. He said the potential for future growth at the state's ports might be found with container shipping.

"We're always going to have the raw materials moving and finished goods, but the future will be in intermodal," said Haen. "Intermodal meaning a combination of moving things in containerized units from truck, train to ship."

Maritime commerce generated around $480 million in direct and indirect spending in Wisconsin, as well as $241 million in local, state and federal taxes last year.