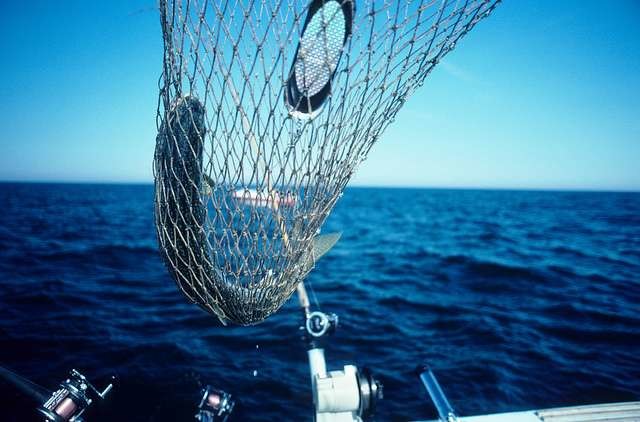 Newly published data from University of Wisconsin-Madison researchers show that despite reductions in mercury emissions in the United States, levels of the toxin found in Great Lakes trout have not declined at the same rate.

The study published in the Proceedings of the National Academy of Sciences shows that while mercury emissions have declined over the past 40 years, trout in Lake Michigan haven't seen any substantial decrease in mercury levels over the same period.

Ryan Lepak is a UW-Madison postdoctoral researcher at the UW-Madison Aquatic Sciences Center who coauthored the report.

Lepak said as mussel populations have grown in places like Lake Michigan, they’ve reduced the amount of microscopic algae known as phytoplankton, which forms the base of the aquatic food chain. Because of this he said the traditional prey species of lake trout have declined forcing the game fish to find other sources of food like the round goby — another invasive species that live in deeper waters near shore.

"Because they have to eat more to get the energy they need, and they’re expending more energy to find that food, ultimately they’re becoming leaner while taking in about the same amount of mercury," Lepak said.

Lepak said if invasive mussels had never showed up in the Great Lakes, it's likely mercury levels in trout would have decreased as they did in sediment samples taken after 1989 when mercury emission standards were enacted.

"It’s not that it was a mismanagement of the ecosystem," Lepak said. "It’s that the rules that govern bioaccumulation have changed. These fish are now getting mercury a different way because of a habitat change and because of an ecosystem change, not because we’re doing a worse job with mercury emission."

Jim Hurley is a professor at UW-Madison and director of the Aquatic Sciences Center. He coauthored the study on lake trout mercury levels and said they used isotopes to determine the sources of mercury found in samples of tissue from lake trout. Hurley said isotopes create a sort of fingerprint that shows where mercury in the fish came from.

"The fish make a great archive because they sort of integrate what’s been happening in the lake over the last 40 years," Hurley said. "And we can clearly show that there’s been changes in sources, but those changes in sources of mercury to the lake haven’t led to a decrease in the concentration."

Mercury is a neurotoxin that can cause damage to the nervous systems of people or animals that consume it. In an effort to reduce human harm from mercury poisoning the Wisconsin Department of Natural Resources recommends limiting consumption of lake trout from Lake Michigan to one meal per month for fish up to 30 inches in length. The DNR doesn’t recommend eating any lake trout bigger than 30 inches in length.