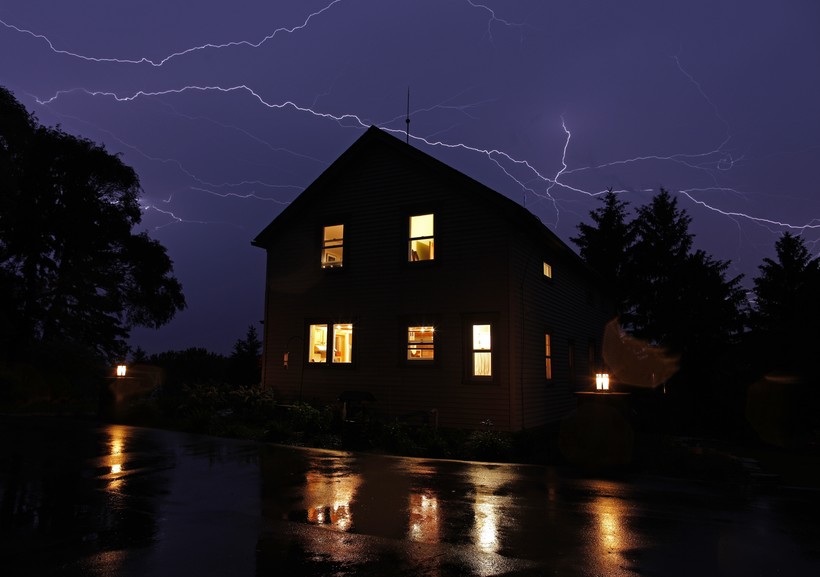 Northwest and southern Wisconsin are dealing with floods and lots of damage after more storms rumbled through the state overnight and more are expected later Wednesday.

A wall of a Menards store was blown down near Saint Croix Falls, and a house was blown off its foundation there, according to the National Weather Service.

In southern Wisconsin, part of the Highway 12 expressway was flooded in Walworth County — and a rock slide and road washout were reported along the Mississippi River in Grant County.

Local flooding in Kenosha County and Lake County, Illinois, prompted Amtrak to suspend service on its Hiawatha line between Milwaukee and Chicago. Amtrak said it would resume that service starting at 3 p.m. Wednesday.

Kenosha County Sheriff Dave Beth is alerting drivers heading home that not all hazards are marked because his county has run out of barricades.

"I know that there are many places, many road locations that do not have barricades, do not have anyone standing by at them right now because they're all deployed," he said. "All the squad cars are out a different situations."

Beth advised motorists not to chance it by driving through standing water.

The city of Kenosha received so much rain that raw sewage is being diverted from the overwhelmed treatment plant into Lake Michigan.

Cars were stranded in a number of places, as up to 6 more inches fell in parts of Racine and Kenosha counties — the same place where up to 6 inches fell just two days ago. Almost 8,000 electric customers were without power earlier Wednesday morning.

Chris Ouellette of Xcel Energy said crews planned to be out all day Wednesday to restore service, but the storm's strong winds slowed the work. Ouellette said they expected to have about 6,700 homes and business effected by the storm back online by 8 p.m. Wednesday.

"In this particular storm we did have a lot of power lines and power poles down," she said. "That obviously requires us to replace our infrastructure, so that does take a little more time."

A flash flood watch was issued until 10 a.m. Wednesday in much of southern Wisconsin with more rain due in later in the day and evening.

Meteorologist Ben Miller of the National Weather Service in Milwaukee said another round of showers could cause more problems in flooded areas.

"Given the fact that the ground in certain portions of the state are very saturated, any additional rainfall — the soil won't be able to handle it and it'll all go into runoff," he said.

Picture from Janesville. Not safe to walk or drive through flooded waters like this. Manhole covers may not still be in position. pic.twitter.com/iPtUDu677L

Honey Creek Dam on the south side of East Troy is being over-topped. Officials are monitoring the situation for downstream areas. pic.twitter.com/2kllrsHjHD

Estimated rainfall amounts since last night. Red areas are where about 6" of rain fell in Walworth/Kenosha/Racine counties. pic.twitter.com/LWWpu1uE2F