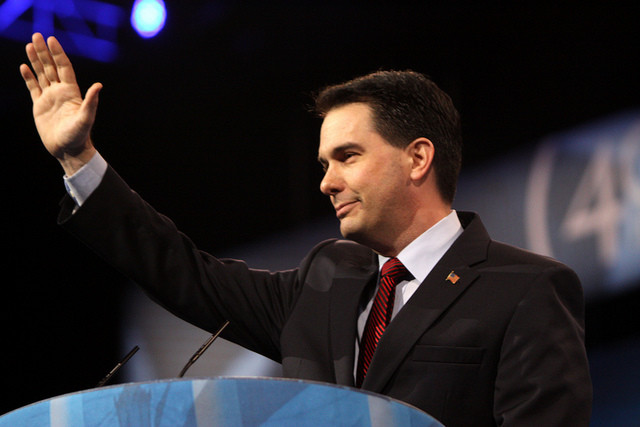 It's looking increasingly likey that Gov. Scott Walker will launch a campaign for the presidency in 2016. Photo: Gage Skidmore (CC-BY-NC-SA).

Stories That Will Likely Be Making Wisconsin Headlines In 2015

Transportation Budget, Walker's Presidential Campaign, And Right-To-Work Will Be Central Issues In 2015
By Amanda Magnus
Share:

A lot happened in 2014 in Wisconsin, and looking ahead, it looks like 2015 will be also be an incredibly eventful year.

Here’s a look at some of the stories that will likely make headlines in the months to come:

Critics said it was an attack on local control, and argued towns should be able to regulate the industry however they'd like.

Looking ahead, Tiffany has said he's considering similar legislation again. Critics worry he'll use his position on the Joint Finance Committee to insert language into the budget that would essentially do what he's tried to do in the last two sessions.

Republicans Look To Make Changes To Government Accountability Board

Gov. Scott Walker and leaders in the state Senate and Assembly have said on the record they'd like to reform the Government Accountability Board in 2015.

The agency has come under fire for its role in the John Doe investigation, for an audit showing it was slow to review past elections for felon voting, and for its failure to create rules to train poll workers.

Assembly Speaker Robin Vos is an outspoken critic and would like GAB to revert back to a partisan board. Walker has suggested a mix of partisan and non-partisan appointees.

Walker has said he'll be pushing for a school accountability bill this year, one that would require all schools — including public schools, voucher schools, and charter schools — to be publicly graded.

Lawmakers couldn't agree last session on how low-performing schools should be punished. This year, a new committee headed by Republican state Sen. Paul Farrow will look into this and other education-related issues. Farrow has said he is interested in re-examining how state funding aid is distributed, and there might also be an attempt to increase the enrollment cap in the statewide voucher school program.

Will The UW Get More Funding From The Legislature?

The University of Wisconsin System is asking for an extra $95 million in funding from the state Legislature. Walker made a campaign promise to institute another two-year tuition freeze, but he also said he'd like to give the UW System more flexibility when it comes to compensation and similar issues.

Also this year, UW President Ray Cross is creating a comprehensive evaluation of how the system works in an effort to make it more proficient and to maybe save some money. It could all mean big changes to the system in 2015.

Walker said he will try to cut property taxes again in the upcoming session, even after the Legislature passed considerable tax cuts in 2013.

Since the state faces a $2.2 billion budget shortfall, there will be a lot more attention on how a property tax cut would be funded. Walker hasn't specified yet how large of a cut he’s considering proposing.

The U.S. Department of Justice is currently investigating into whether there was a civil rights violation in the case of Dontre Hamilton, a mentally ill black man who was shot last April by a white police officer in Milwaukee.

The Milwaukee County district attorney declined to charge the former officer who killed Hamilton. This case has received a lot of attention, both locally and nationally, and Hamilton's death and its subsequent investigations have led to series of protests in the city.

This year, protests will likely continue, and the Justice Department may conclude its review of the case.

This year, people might see some kind of resolution to the John Doe investigation that looked at coordination between outside groups and Walker's recall election campaign.

The state Supreme Court will take up the lawsuits this year that deal with some of the central issues in the investigation. The court will determine whether Wisconsin law needs to be changed because of U.S. Supreme Court rulings on campaign finance law. The main question therein is, how closely can outside groups work with campaigns until certain disclosure and donation caps take effect?

Legislature Could Take Up Right To Work

Several key lawmakers have said they might try to pass right-to-work legislation in Wisconsin this year, which would prohibit mandatory payment of union dues as a condition of employment.

The legislation, which has surfaced in other states, has been extremely controversial. Walker has said right-to-work isn't one of his priorities, but he hasn't said whether or not he'd veto a bill should it land on his desk.

Walker might be doing more traveling this year, to Iowa and other key states, as he considers launching a campaign for president.

He might also begin commenting more on the presidential election and potential primary opponents. The passage of the upcoming budget will also be a critical consideration for Walker as he eyes the presidency, both in terms of the timing of the process and the kinds of issues the he champions or ignores.

This year, the governor and legislators will be considering a large range of options to help pay for roads, including reforming the gas tax, taking more money from the general fund to pay for roads, expanding the sales tax to include car-related purchases, and a new fee for hybrid and electric car owners.