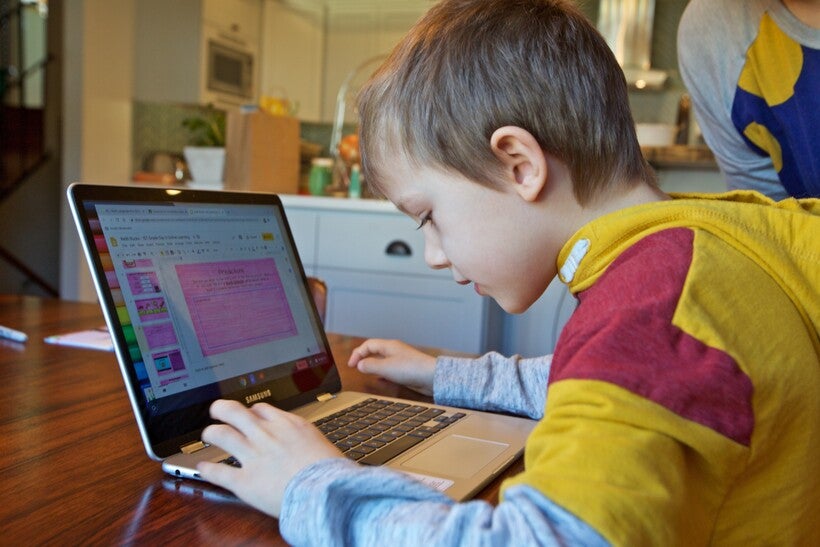 In this Tuesday, March 17, 2020 photo Keith Bucks, works at home remotely during an online class assignment from his first grade class at Arco Iris Spanish Immersion School in Beaverton, Ore. Oregon has shut down schools through April 28 and some districts have put optional activities online, though they are not meant to replace the regular curriculum. Craig Mitchelldyer/AP Photo

Teachers unions for Wisconsin’s five largest school districts are asking Gov. Tony Evers and the state’s top health and education officials to keep schools closed at the start of the year due to the coronavirus pandemic.

The letter sent Monday was signed by union leaders for teachers in Milwaukee, Madison, Green Bay, Kenosha and Racine. It was sent to Evers, Department of Public Instruction Secretary Carolyn Stanford Taylor and Department of Health Services Secretary Andrea Palm.

The letter's authors wrote that the coronavirus is "surging" across the state, and reiterated that Wisconsin has one of the fewest restrictions meant to stem the spread of the virus. On Sunday, the state's average number of positive cases for the past seven days was at an all-time high of 838.

"Our students need safe, equitable, well-resourced classrooms staffed with highly qualified educators, so they can learn," the letter says. "The classroom is where every single educator wants to be this fall, but with no containment of Wisconsin COVID-19 cases, a virtual reopening for public schools is necessary."

Guidelines from the Centers for Disease Control and Prevention caution that students are at highest risk in a regular classroom environment, where desks are full and students aren't spaced out. The lowest risk, which the authors of the letter mention, is in a virtual environment for classes, activities and events.

Angelina Cruz, president of Racine Educators United and one of the authors of the letter, said opening schools in person when the virus hasn't yet been contained is irresponsible.

"Why is this a debate?" she asked. "If there's any possibility that a staff person in a building or a child could die or contract it and carry it home and one of their loved ones dies because of it — I don't understand why this is such a hotly debated topic."

Milwaukee and Madison public school districts have already announced that they plan to start the school with online instruction only, and plan to reassess later on.

Some private and charter schools in the Milwaukee area had planned on reopening under rules set by the city health department. But a recent rule change prevents them from moving ahead with those plans.

Sunday evening, Wisconsin Lutheran High School teachers, parents, students and others protested outside of Milwaukee Mayor Tom Barrett's house to urge changes that would allow them to teach students in person in the fall.

Members of the Milwaukee Common Council received an influx of messages from parents of students in Milwaukee schools who would be impacted by this ruling. One parent said the decision by the public school system to start students off in a virtual setting is "heavy-handed," and stressed that his freedom to send his kids to school was being infringed on.

Some parents expressed frustration with the health department's decision, because they said their schools have been prepping for students' return and planning ways to keep them safe. They're concerned that the time and money it took schools to implement those plans may have been in vain.

Jim Bender, president of School Choice of Wisconsin, agreed that schools have been making changes to prepare for the influx of students, for example by replacing water fountains with handless options that will reduce the spread of germs.

"The idea that we're going to lock down schools while we're keeping other businesses and day cares open does not take consideration into the complexity of the issue," he said. "There are students that should be back at school in a safe environment, (and) schools have been spending a great deal of time to create safe environments for children to return."