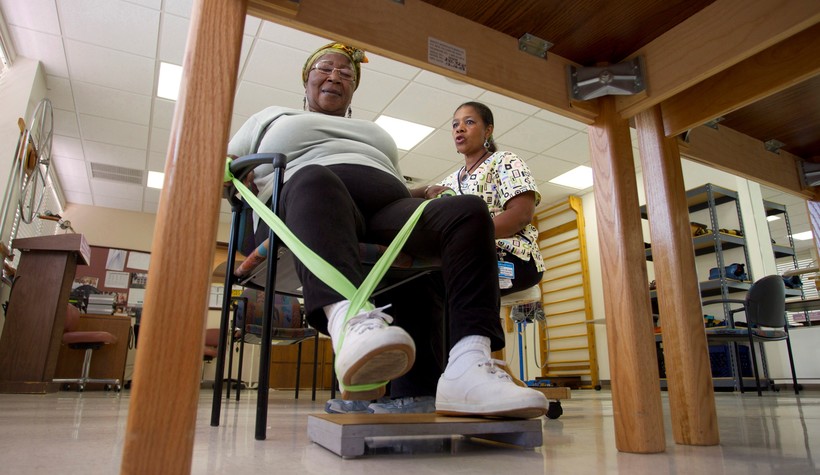 Elmaze Joseph, left, works with therapist Jocelyne Denis doing foot exercises. Across the U.S., facilities are widely expanding in-home care and assisted living, and looking to new ways to generate income beyond their traditional role of housing the elderly during the last years of their lives. J Pat Carter/AP Photo

The Wisconsin Department of Health Services is reporting more than 400 cases of the new coronavirus in nursing homes and group facilities in the state.

Data on group housing was unavailable for roughly half the state's positive cases because health officials just began tracking that information on April 8. Local health officials have been asked to fill in data where it's missing.

Additional data provided by DHS shows at least 79 people in long-term care and group facilities have died from COVID-19. That's about one-third of the state's 246 total COVID-19 deaths.

Nursing homes and assisted living facilities care for some of those most vulnerable to severe effects of COVID-19, sparking the elimination of communal activities and visitation in most cases. Workers and residents are being monitored and screened to prevent the spread of the virus in the absence of widespread testing.

LeadingAge Wisconsin, which serves nonprofit long-term care providers, recently provided guidance from state and federal agencies to quarantine any new admissions for 14 days. President and CEO John Sauer said their members are doing everything they can to prevent infection.

"But the real uncertainty here is so many people are asymptomatic, and they present none of the warning signs that they may be carrying the virus," said Sauer.

When cases are confirmed, Sauer said facilities are required to report them to local and state health officials, as well as staff, residents and their families.

"If we do develop a case, everyone in our community will know — everyone in the Villa Marina community," she said. 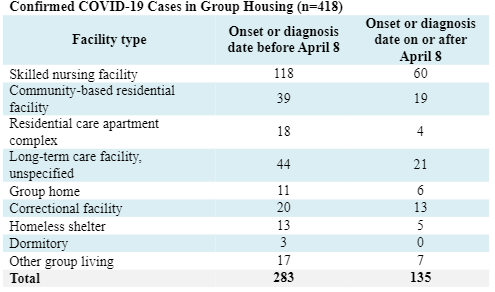 Data courtesy of the Wisconsin Department of Health Services

The federal Centers for Medicare & Medicaid Services announced this week that nursing homes would also be required to report cases to the U.S. Centers for Disease Control and Prevention and notify residents and families within 12 hours of a single confirmed case.

Some think notifying the public would increase transparency and improve response, including Alexis Eastman, a physician and faculty member within the Division of Geriatrics at the University of Wisconsin-Madison.

"I feel that, from a public health standpoint, it's important for us to know where cases are and how people are responding to them," said Eastman.

She noted some health care staff might work at multiple nursing homes. Public disclosure of which facilities have positive cases may enable administrators to take steps to prevent potential spread by quarantining employees who may have been exposed.

Eastman said there's also been some discussion about setting up temporary facilities to care solely for residents who test positive, but there are obstacles. Sauer said hurdles include configuration of facilities and payment for those providing temporary care.

He said he thinks public disclosure of cases could stigmatize facilities and lull people into a false sense of security where nursing homes have not yet identified positive cases. Other long-term care advocates agree that confirmed cases may not provide a complete picture in the absence of widespread testing, including John Vander Meer, president and CEO of the Wisconsin Health Care Association and Wisconsin Center for Assisted Living.

"This is not just a nursing home issue or an assisted living facility issue, this is an everyone issue," said Vander Meer. "This is a challenge for the entire system of not necessarily having the testing capacity necessary." 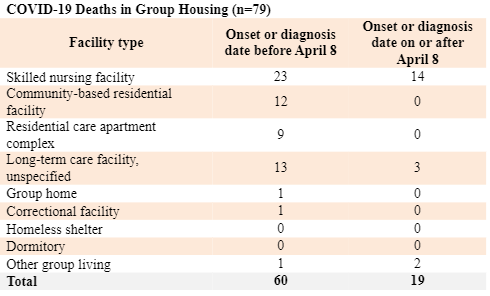 The desire among health officials to remain ethical and transparent has been put to the test regarding public notification of positive cases, according to Lisa Grill Dodson, a physician and board chair of the Wisconsin Academy of Family Physicians.

"I think that in a time of a pandemic, certainly we have to move in the direction of the public health and the public good farther than we normally do in the care of individuals where individual privacy is the most considered thing," said Dodson. "It is a very difficult line to walk."

The coronavirus pandemic is also testing the financial strength of skilled nursing facilities that may be seeing a loss in revenue due to fewer referrals. Minneapolis-based accounting firm Clifton Larson Allen claims up to 70 percent of 14,000 facilities nationwide could be spending billions more than they're generating, according to media reports. Prior to the pandemic, Wisconsin facilities were already struggling with funding shortfalls.

State nursing homes and assisted living centers have been seeking personal protective equipment for caregivers who are often in intimate contact with residents.

Vander Meer said facilities have received distributions from the Strategic National Stockpile, but the association also recently obtained 120,000 masks for nursing homes through a connection from one of its members.

Some people have expressed concerns about nursing homes not having enough masks or personal protective equipment through WPR's WHYsconsin project.

Registered Nurse Diane Sewell works at the Skaalen Nursing and Rehabilitation Center in Stoughton. She said the roughly 90-bed facility has the supplies necessary to protect her and residents although they're taking care to conserve resources while following state and federal guidelines.

The facility recently admitted a couple recovering from COVID-19 after the nursing home set up a unit separated from other residents that's equipped to care for positive cases. The move has unsettled some families of loved ones there, but Sewell volunteered to care for the couple.

"That's what we're nurses for is to take care of the sick no matter how sick or what they're sick from," she said. "We can certainly provide them emotional support, physical support therapy services to get them home ... It's been like a month now for some of these people that have been stuck in limbo, and we need to offer that for our community."

For those who will remain, Sewell said it's been difficult for residents who are either fearful of the virus or lonely since they're unable to see their family members. But, nurses have been quick to pull out their cell phones so they can FaceTime with their loved ones or organize activities to connect residents at a distance.

"If we can make somebody feel good, it supports us as well," she said.