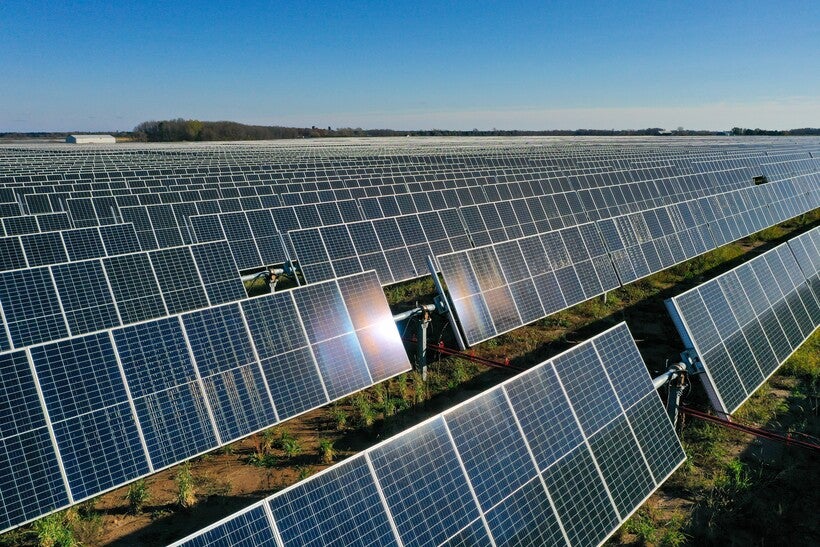 The Two Creeks solar plant in Manitowoc County went online in November. With half a million solar panels, the solar farm can provide enough power for 33,000 homes. Photo courtesy of Wisconsin Public Service

State Regulators Seek A Roadmap Toward A Clean Energy Future

Wisconsin’s electric utilities are already transitioning away from fossil fuels in their power mix. Now, regulators will investigate how the state can chart a course toward a clean energy future while maintaining reliable and affordable electricity.

The Public Service Commission voted 2-1 on Thursday to launch an investigation into utilities' ongoing transition to zero-carbon electricity. The investigation seeks to develop a roadmap that would identify economic and environmental benefits of a transition to clean energy.

Commission staff will review goals set by the state’s five largest utilities to reduce carbon emissions 100 percent by 2050 and recommendations stemming from Gov. Tony Evers’ executive order on clean energy. Staff will also evaluate recommendations from the Governor’s Climate Change Task Force and ideas for accelerating the clean energy transition that were outlined by a Wisconsin group of utilities, consumer advocates and business groups.

Commissioner Ellen Nowak expressed concerns about creating a roadmap for utilities. She said the PSC takes up issues from utilities on a case-by-case basis, saying they don’t have the authority to force them to build or close certain power generation facilities.

"I totally get, and I fully support moving to our reduced carbon future. That is where we're going," said Nowak. "But, putting a line in the sand to say that we're going to be 100 percent carbon-free is concerning because we don't know how we're going to get there."

She noted 75 percent of the state’s power is currently generated with the use of fossil fuels, according to the most recent strategic energy assessment. If nuclear were also excluded, she said that could leave Wisconsin with 91 percent of its power mix that would need to be replaced with renewable energy sources.

Nowak indicated those decisions would be better left to utilities given shifts in technology and the industry over time. She highlighted uncertainties over how utilities would comply with the governor’s executive order regarding their existing operations and the current transmission system.

"Based on your comments, it sounds like we need a roadmap," said PSC Chair Rebecca Valcq. "Those are exactly the types of questions that I think this is intended to get at."

Valcq argued it's within their authority, as well as regulators’ responsibility, to determine how utilities plan to meet the carbon reduction goals they’ve outlined.

Evers has also set a goal for utilities to produce carbon-free electricity by 2050.

The investigation will also consider:

Under state law, the commission is required to prioritize energy conservation and efficiency, as well as renewable energy resources, to the extent it’s "cost-effective, technically feasible, and environmentally sound."

Commissioner Tyler Huebner said other investigations have helped staff engage with utilities on broader issues impacting power generation that would be much more difficult on a case-by-case basis.

"As we're looking at this transition, thinking about ... our three-legged stool of safety, reliability and affordability continues to be incredibly important," said Huebner. "And I think that's one of the benefits of doing this."

Bill Skewes with the Wisconsin Utilities Association said Thursday it was too soon to comment on the investigation. The commission will seek comments and set a timeline for public input at a later date.