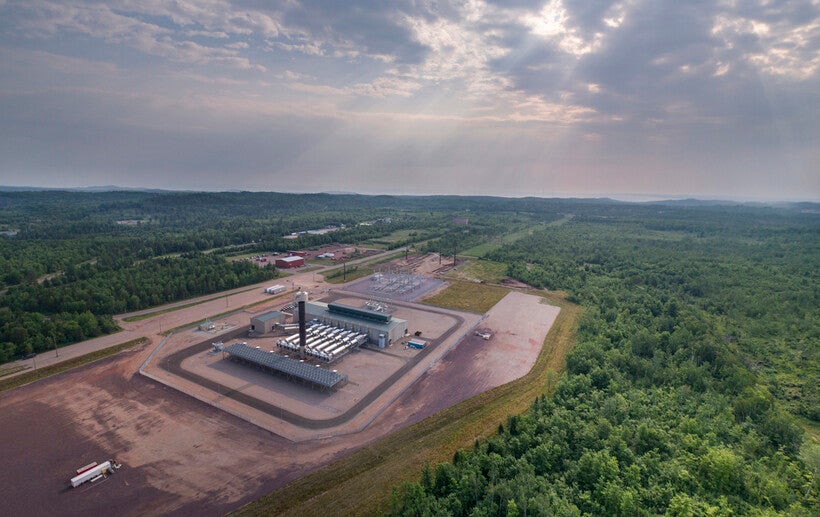 We Energies and WPS will build a $171 million natural gas plant that will include seven reciprocating internal combustion engine units similar to those at F.D. Kuester Generating Station in the Upper Peninsula as pictured here.
Photo courtesy of We Energies

We Energies and WPS say the plant is vital for maintaining reliable power during the clean energy transition
By Danielle Kaeding
Updated:
Thursday, March 31, 2022, 2:00pm
Share:

State regulators voted 2 to 1 to approve plans from two of the state's largest utilities to build a $171 million natural gas plant near Wausau despite objections from environmental, ratepayer and renewable energy advocates.

Utilities argue the plant is needed to maintain reliable power when renewable energy is unable to meet demand, but environmental and ratepayer groups say it’s an unnecessary project that will cost customers more and delay the shift away from fossil fuels.

We Energies and Wisconsin Public Service say the 128-megawatt plant is a key part of a $3.5 billion plan to retire 1,600 megawatts of fossil fuels and replace that with power from wind, solar and battery storage. Milwaukee-based WEC Energy Group, which owns the two utilities, has pledged to cut carbon emissions 80 percent by 2030 and go carbon-neutral by 2050.

As part of the transition, they plan to keep a "modest amount" of natural gas in their power mix that includes the new plant, which will have seven reciprocating internal combustion engine (RICE) units in Rothschild and Kronenwetter.

"These ones and some of our other RICE units, they're modern. They're flexible, and it's low carbon generation that will help make sure that we can keep the lights on as we add more wind and solar that may not always be able to provide electricity," said Brendan Conway, spokesperson for the utilities.

"The company will be able to call on that capacity to fill in the gaps for intermittent resources when it's needed," Valcq said.

As Wisconsin and the federal government aim to go carbon-neutral by mid-century, Commissioner Ellen Nowak argued regulators need to "be the adults" to ensure reliable and affordable power throughout the clean energy transition.

However, Commissioner Tyler Huebner, the lone dissenting vote, noted utilities currently have more than 3,000 megawatts of natural gas in their power mix.

"But each application must stand on its own, and this record leaves too many open questions for me to be able to affirm that the public interest requires this facility," he said.

Utilities hope to begin construction of the plant this year and place it in service in 2023. They contend the project is part of its overall plan that will save customers more than $1 billion over the next two decades. However, a ratepayer advocacy group said utilities failed to conduct a specific analysis of the project, examine alternatives and show evidence the project is cost-effective.

"It's a missed opportunity for savings. Clearly, the most economical option was to either not build this or build a much smaller version," said Tom Content, the board's executive director. "We think that any utility investment needs to be looked at carefully and scrutinized with rigor. This one just didn't pass the test."

Ratepayer and environmental groups also argue the project isn’t needed after utilities announced plans to buy the Whitewater gas plant. Clean Wisconsin said in comments to the commission that the purchase "will more than meet" the utilities’ need for capacity since it has double the power output of the proposed facility that will be built alongside the Weston power plant.

The environmental group also disputed that the gas plant meets requirements under the Wisconsin Energy Priorities Law that any new projects should be cost-effective, technically feasible and environmentally sound to the greatest extent possible.

In comments to the commission, both Clean Wisconsin and RENEW Wisconsin argued the project threatens to hinder the utilities’ ability to meet their own carbon reduction goals, as well as the state’s goal.

"Reasonable forward-thinking adults would be trying to do everything we can to get off fossil fuels to avert the worst of climate change, and the PSC is entirely ignoring the role that it has to play in Wisconsin's transition," said Brett Korte, staff attorney with Clean Wisconsin.

Commissioners said the Wisconsin Department of Natural Resources regulates air pollution — not the PSC. Even so, Clean Wisconsin noted the plant is estimated to contribute around half a million tons of carbon dioxide to the atmosphere each year.

At the same time, renewable energy advocates highlighted uncertainty with potential federal regulation of carbon emissions in the future that could prove costly for utilities. RENEW Wisconsin said We Energies has already spent $875 million on pollution controls to meet requirements under the Clean Air Act at its Oak Creek site alone.

Clean Wisconsin also argued a full environmental impact statement should have been conducted for the gas plant because the commission’s environmental assessment failed to consider carbon emissions or provide a sufficient review of effects on wildlife and water resources.

Clean Wisconsin and the Sierra Club sued the PSC in 2020 for its approval of a similar gas plant in Superior, and that case is still pending. Korte said the group is weighing any potential legal action against the commission over the Weston decision.