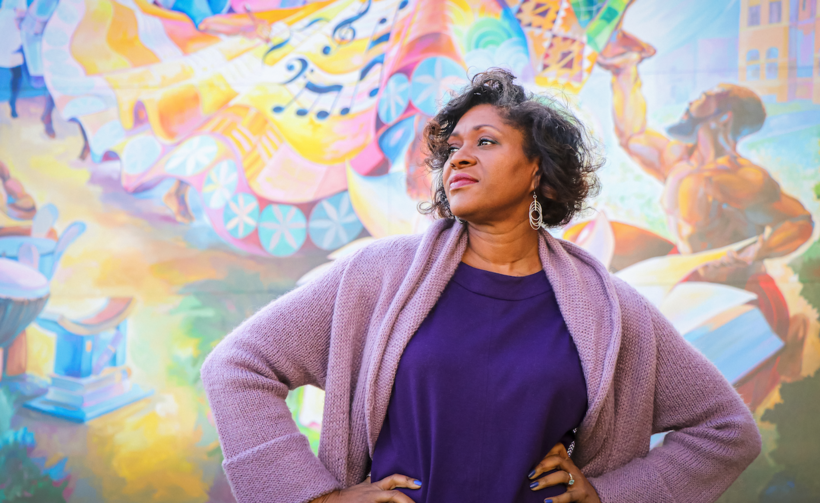 Dasha Kelly Hamilton felt like she spent the first six or seven months of her term as Wisconsin’s poet laureate as if she were getting ready to paint a room.

It takes time to move furniture and cover it up. She had to pick the color and get the paint. Then, she needed to put the blue tape around the corners.

But now, she can paint.

"I’ve been excited to build these — I’m going to call them these portals," she said. "For people to fall into poetry, for people who didn’t know that they were already poets. Yes, you. Over there, sipping your coffee. You’re a poet, too."

Hamilton joined WPR’s "The Morning Show" on Friday as she is progressing through the second and final year as the state’s poet laureate.

Before she gave the keynote address at the Young Writers Conference Friday afternoon in Sturgeon Bay for middle and high school students, she shared details on two initiatives she is working on.

A $50,000 grant will allow Hamilton to start a pilot Milwaukee Youth Poet Laureate program this fall.

The selected winner will spend their junior or senior year "being the voice of a city," Hamilton said, adding that it’s vital for "not-so-young people" to make space for the voices of young people.

The Academy of American Poets awarded $1.1 million to about 23 poets laureate nationally, the Milwaukee Journal Sentinel reported last summer when the news was announced.

Hamilton said she’s been working with kids for more than 20 years, trying to give them space to speak. Most want to, but they’re stuck on algebra or their part-time job at Culver’s. They’re wondering why their parents don’t understand them or why their sister keeps taking their stuff, she said.

When working with students, she tries to "upset everything they’ve been taught."

There are skills to learn that can make a written scene more vivid. But there’s more to this art form. Think of reading "an amazing bit of text that was devoid of soul."

"If I’m in this classroom, there’s probably two students in here that are committed to words and writing," she said. "But every student in here needs and wants to know that what they think matters, that they have the capacity to imagine beyond what’s right now."

The same sentence can evoke two completely different responses from two different people. They bring different life experiences. So, Hamilton said where one person is reminded of a sunset, another thinks of cooking spaghetti.

Under the A Line Meant program, someone will receive one line of poetry as a prompt to create a story or memory that can turn into a poem.

Once interested parties upload their own poem, they will get a poem from someone elsewhere in the state who had the same prompt. This happens at the end of the month over a few months.

"This initiative creates this unexpected conversation that’s kind of not a conversation, right?" she said. "It’s not a pen pal experience where you sign on and now, you’re committed to trade poems with this person — this stranger — forever."

Hamilton launched this project in November. She wrote on her website that the first 12 poetry line prompts come from "Through This Door," an anthology of Wisconsin writers.

Ultimately, she will pick some pieces to be published alongside some of her own work.

LISTEN: Dasha Kelly Hamilton's 2021 appearance on "The Morning Show," when she discussed being the state's first Black woman in her position and more

She is also opening up this program to incarcerated writers, as well.

She offered an example where "Little Miss Margaret in Rhinelander" will be exposed to the life experiences of someone she might never have seen before. All recipients get are a name and a city, but someone from Racine could mean the city itself or the Racine Correctional Institution.

"Little Miss Margaret will have an internal conversation on whether or not that matters," Hamilton said. "Across the board, we all get to be reminded that there are human beings in those buildings.

"Remembering there are human beings in those buildings who write poems, have a favorite candy, have a relative they don’t want to hear from, and they were all seven once," she continued. "We get to trade with our full writing community."