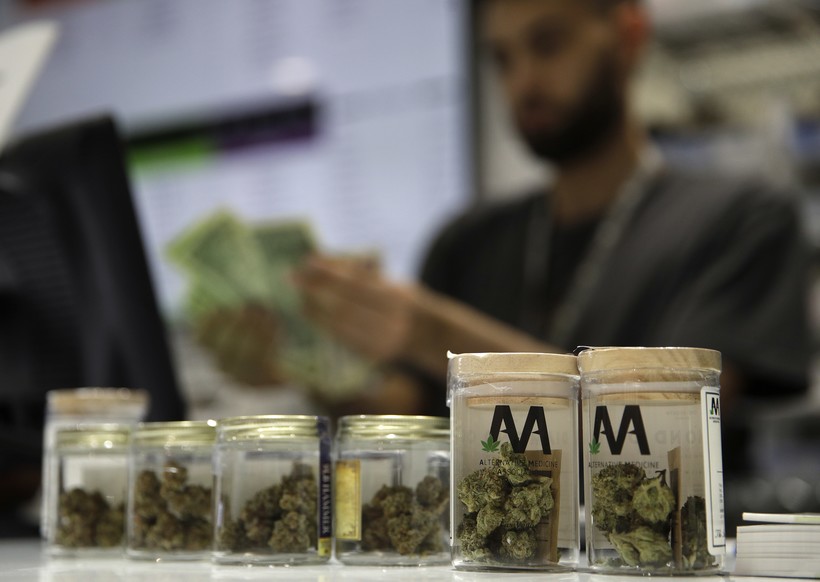 A cashier rings up a marijuana sale at the Essence cannabis dispensary, Saturday, July 1, 2017, in Las Vegas. Nevada is the most recent state to allow recreational sales.

A Wisconsin lawmaker is proposing to legalize both medical and recreational marijuana as a way to create jobs and generate revenue without increasing taxes.

Democratic state Rep. Melissa Sargent, of Madison, has tried to pass bills legalizing marijuana the last two sessions. They never even got a committee hearing in the GOP-controlled Legislature, but Sargent says her most recent bill is different than her previous proposals.

"It will include increasing oversight and protections for our consumers," she said Thursday at a capitol press conference introducing the bill.

It would treat marijuana as an agricultural product, requiring the state Department of Agriculture, Trade and Consumer Protection to conduct periodic inspections and to promote best practices for producing, harvesting, and packaging. The bill also requires insurance coverage for medicinal use of marijuana for terminal illness and incorporates marijuana into current alcohol and tobacco educational curricula in schools.

"What the school curriculum portion of the bill does is it would treat marijuana in the same way that we treat alcohol and other drugs, tobacco for example," Sargent said. We absolutely need to be talking to our kids about how it is that they can be taking care of themselves. Their brains are developing until they’re 25, 26 years old."

The bill is being introduced as the state faces a $1 billion transportation deficit.

"There’s not a simple, single other solution that’s put on the table by my Republican colleagues or by Gov. (Scott) Walker to solve our state’s severe budget crisis that can simultaneously increase hundreds of millions of dollars of revenue without increasing taxes," Sargent said.

The bill would allow an individual to grow six marijuana plants for personal use. More than that would require a permit. Twenty-nine states allow the use of marijuana for medical purposes and eight allow it for recreational use.

"So the question isn’t a matter of 'if' marijuana is going to become legal in the United States or in the state of Wisconsin. The question is, 'When is that going to happen,'" said Sargent.

In May, Wisconsin Republican state Rep. Adam Jarchow, of Balsam Lake, introduced a bill to decriminalize small amounts of marijuana. Sargent is a co-sponsor of that legislation but said her bill goes further.

"I know that we can actually provide more opportunity, more security and more prosperity for the state of Wisconsin if we go the whole way down the road and legalize marijuana for medicinal and recreational purposes," said Sargent.

The experience of other states which legalized the drug, she said, should ease any concerns.

"These states' experiments across our country are working and the ground is not falling out in communities that have legalized marijuana," Sargent said.

There is no fiscal estimate on the bill yet.  A Marquette University Law School poll conducted in 2016 showed 59 percent of Wisconsinites want marijuana to be legal and regulated like alcohol.