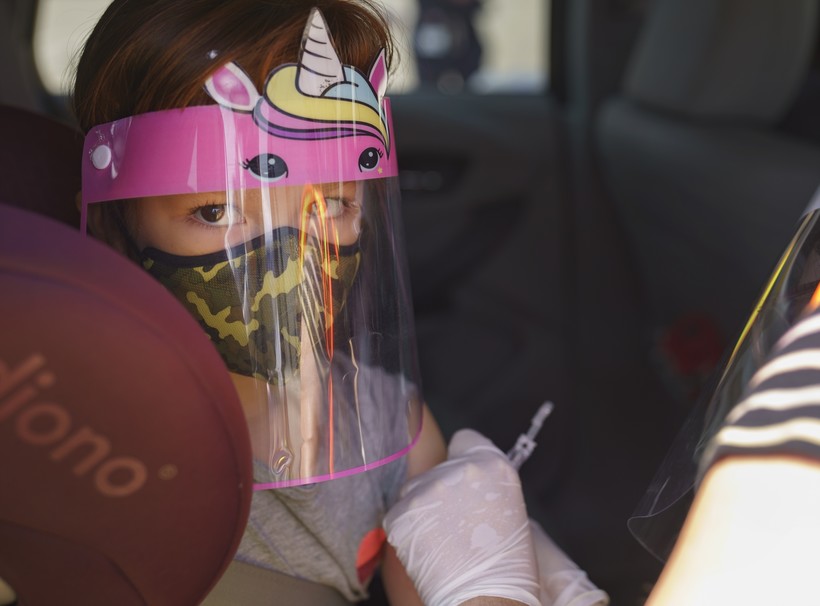 Juliet Chiu, 7, from Los Angeles, gets her influenza vaccine during a free drive-thru vaccination event at the Exposition Park in Los Angeles, Saturday, Oct. 17, 2020. The Centers for Disease Control and Prevention urges people to get immunized against the seasonal flu by the end of October, especially those at higher risk of complications, including pregnant women, older adults and young children. Damian Dovarganes/AP Photo

All 3 fatalities occurred within weeks of each other; 39 percent of Wisconsinites received flu shots this year
By Shamane Mills
Share:

State health officials are urging people to vaccinate their children against the flu after three children recently died from the disease.

Fewer than 40 percent of people in Wisconsin have gotten their flu shots for a season which usually peaks in late December, early January.

During the previous flu season, a record 44 percent of people were inoculated against influenza.

While it has been a mild influenza season so far, the percentage of children getting flu shots this year has been "very low" said Tom Haupt, influenza surveillance coordinator for the Wisconsin Department of Health Services.

"People need to take influenza and some of these other (respiratory) diseases very seriously," he said. "We don’t want to have any more children die from influenza."

Nationally, 11 children have died from influenza so far this season. In Wisconsin, Haupt said there have been 32 total flu deaths including three children. Last year there were no fatalities from the flu and only 100 reported cases all season — a drop public health officials attribute to COVID-19 mitigation strategies that also helped limit the spread of the flu.

This year’s vaccine was found to be 16 percent effective against influenza, but Haupt urged people to get a shot anyway, saying some protection is better than none.