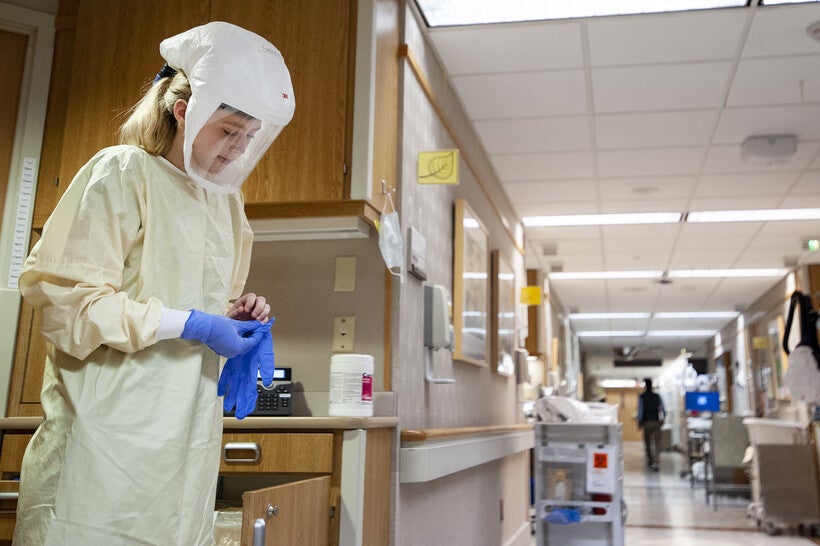 State health officials said Thursday that they’re bracing for the COVID-19 pandemic to get worse as the seven-day average of new cases is seven times what it was one month ago.

Most new infections stem from people who are not fully vaccinated, according to the Wisconsin Department of Health Services. The agency launched a new webpage on Wednesday that displays a side-by-side comparison of COVID-19 rates between vaccinated and unvaccinated residents.

"The increase in cases we are seeing in Wisconsin right now is being largely driven by the delta variant, and the overwhelming majority of people who are contracting COVID have not been fully vaccinated," said DHS Secretary-designee Karen Timberlake in a statement. 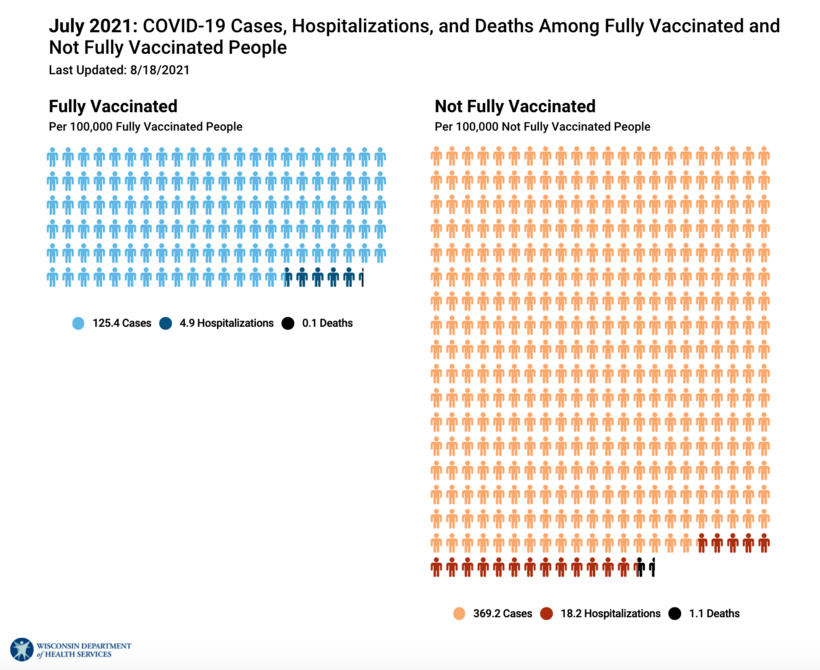 Chart courtesy of the state Department of Health Services

"The pandemic is heating up. There’s more cases everywhere," said Dr. Ryan Westergaard, chief medical officer with the Bureau of Communicable Diseases at DHS. "It’s going to affect both vaccinated and unvaccinated people, although much more — to a much greater degree — people who are not protected by vaccines."

State health officials underscore that the total number of likely cases associated with exposure to the original strain of COVID-19 compared to the delta variant has grown from six to 30 cases stemming from one infection. DHS data shows the seven-day average of new cases was 1,223 on Wednesday — nearly seven times higher than one month ago. That's the highest it's been since February.

The state recorded 16 new COVID-19 deaths on Wednesday, which is the highest number of deaths from the virus in a single day since February. More than 7,500 people have died in Wisconsin due to the virus. But, the risk of dying from the virus is 10 times lower among people who are vaccinated.

Hospitalizations from COVID-19 have increased 800 percent across the state since July 4 with a seven-day average of 619 people hospitalized as of Tuesday. The number of people who have been hospitalized due to the virus has also increased more than tenfold in the last six weeks across southeastern Wisconsin. On Wednesday, Milwaukee County health officials said "now is the time" to get vaccinated as the delta variant has become widespread.

Federal health officials announced Wednesday that Americans should get booster doses of the Pfizer and Moderna vaccines eight months after their last shot. Those booster shots will be available to the public beginning the week of Sept. 20. While the vaccines are effective against the delta variant, people’s immunity to the virus is decreasing over time as COVID-19 continues to spread.

While the vaccines have the most impact, Westergaard said other steps should be taken to control the spread of the virus that include limiting gatherings and wearing a mask indoors. He added that organizations should require masks, especially in schools.

"We need to have 100 percent mask-wearing in school environments if we want to do the best we can to prevent disease spread," said Westergaard. "And with people dying from this pandemic, it should be in all of our interests to do the things we can to minimize disease spread."

Many school boards aren’t requiring masks among districts across the state as the virus is surging and affecting kids more due to pushback from community members. Westergaard acknowledged not all schools are mandating masks, advising parents to encourage their children to mask up.