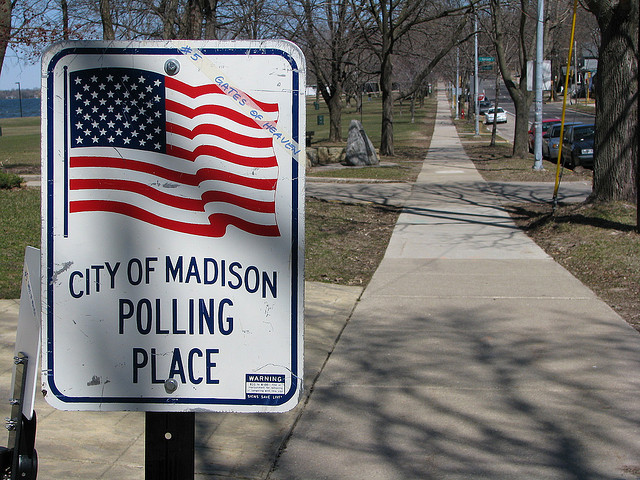 Members of the Wisconsin Elections Commission disagreed Wednesday on whether Wisconsin's April 7 election should be postponed.

A number of other states, including Ohio, Georgia and Maryland, have delayed their spring elections amid the spread of COVID-19 across the country.

The commission doesn't have the power to postpone the election. That would take action from the state Legislature, courts, or Gov. Tony Evers, because the election date is written into state law.

Evers has indicated he isn't in favor of delaying the election.

"At this time, we believe it still should happen," the governor told WPR on Tuesday.

The governor noted that a number of local offices are on the ballot on April 7, including county executive and mayoral races. He raised concerns about those elections not taking place as scheduled, as winners take office soon after the election.

"It’s important to maintain continuity in local government ... that’s why it's so vitally important," Knudson said. "We’re going to have an election and it’s already underway."

Commissioner Ann Jacobs argued in favor of postponing the election.

"I no longer believe that we are able to fairly and properly administer this election without delay or postponement," Jacobs said. "I believe we’re putting people at risk."

"We’re going to have an election where no one can can vote safely — that’s absurd," he said.

Commissioner Julie Glancey argued in favor of an election by mail-in ballot only.

Commissioners also used the meeting to address concerns raised by clerks across the state ahead of the election, including a shortage of supplies to accommodate a major increase in mail-in ballot requests, last-minute polling place location changes, and expected poll worker shortages.

The meeting came as the state rapidly approached a deadline for online and mail-in voter registration for the April 7 election, which includes the presidential primary, a state Supreme Court race and a proposed constitutional amendment. In order for any unregistered Wisconsin voters to become eligible to vote in the April 7 election, they need to submit their online registration by 11:59 p.m. Wednesday, March 18, or have their mail-in request postmarked by the end of the day.

In-person registration will still be available through Election Day at local clerk’s offices, but many are opting for online or mail options amid continued spread of the new coronavirus.

In a memo to commission members posted before Wednesday’s meeting, Elections Commission administrator Meagan Wolfe said while some clerks have raised concerns, extending the deadline for online or mail-in registration isn’t possible without action by the state Legislature. The deadlines are written into state law.

"The concern regarding deadlines results from the greatly increased interest in absentee voting combined with the guidance that the public should minimize close interactions with others, especially in mass gatherings," she wrote.

The Legislature would face steep obstacles if it wants to pass any new laws before April 7. Just Tuesday the state Senate postponed previously scheduled session days for next week, citing concerns about gathering 33 senators, their staff and necessary support workers at the state Capitol amid the pandemic.

As election officials continue to push hard for Wisconsin residents to vote by mail for April 7, Wolfe said they are facing unprecedented pressures.

"With the push to encourage absentee voting from various sources, clerks in many communities do not have enough absentee certificate envelopes for voters to use when returning their absentee ballot, and in some cases are using envelopes intended for the fall elections," she wrote.

The deadline for voters to request a mail-in absentee ballot for the election is Thursday, April 2. However, officials are urging voters to submit their requests as soon as possible. Requests may be submitted online or by email, fax, or traditional mail.

Wolfe said the commission is powerless to extend the deadline for returning absentee ballots, much like its hands are tied regarding extension of registration deadlines. The deadline of 8 p.m. Election Day is also written into state law and would require legislative action to change.

Wolfe’s memo also noted more than 50 percent of poll workers in the state over age 60, a population considered at higher risk of contracting COVID-19.

"Commission staff has encouraged clerks to put together backup lists of election inspectors in case poll workers notify clerks they will not be able to work, or do not show up on Election Day due to illness or other health concerns," she wrote.

The commission is encouraging local officials to implement any contingency plans and refer to any existing supplemental lists of workers they may have.

"Staff has also suggested that clerks reach out to high school students, college students, teachers, other municipal, county, and government employees and to private employers in their community," Wolfe wrote.

Clerks are also encouraged to identify someone on their staff who could run Election Day if they themselves contract COVID-19. Many clerks are also in higher-risk age ranges, the memo said.

In relation to polling sites, the memo notes buildings like libraries, which have been closed amid the pandemic, can still be used as Election Day polling places under Evers' latest emergency order.

The commission held an emergency meeting last week and voted to give local officials more flexibility to move polling places away from locations like nursing homes.

The memo urged clerks to consider new polling locations at places like fairgrounds, fire stations and park pavilions. It noted any change must be communicated to voters by "any means possible," including social media, direct mailings and traditional media stories.

Wolfe noted clerks have also contacted the state Elections Commission about a shortage of cleaning supplies to be used at polling places.

"The lack of available hand sanitizer and other sanitation products has emerged as one of the key concerns of clerks and election inspectors, a large percentage of whom are in the age range of higher vulnerability," her memo read. "The clerks and inspectors will be directly working with voters, and without adequate sanitation stations they would not be in compliance with the procedures recommended by federal and state health officials for large public gatherings."

The commission is advising clerks to work with their local and county health authorities to determine what resources are available but noted "with some localized exceptions, there appears to be no hand sanitizer or sanitation wipes available through local, state or federal channels."

Overall, Wolfe urged local officials to navigate problems as they emerge and proceed as though the election will take place on April 7. Like other election-related laws, the date of the election itself is written in state law. It would take action by lawmakers, courts or the governor to change it.

"According to public comments of the Governor over the last several days, election officials and voters should continue to plan that the Spring Election and Presidential Primary will occur on April 7, 2020," Wolfe wrote. "Commission staff believes its own work and guidance to clerks has reflected that approach and encourages clerks to seek solutions to the challenges posed by the circumstances."