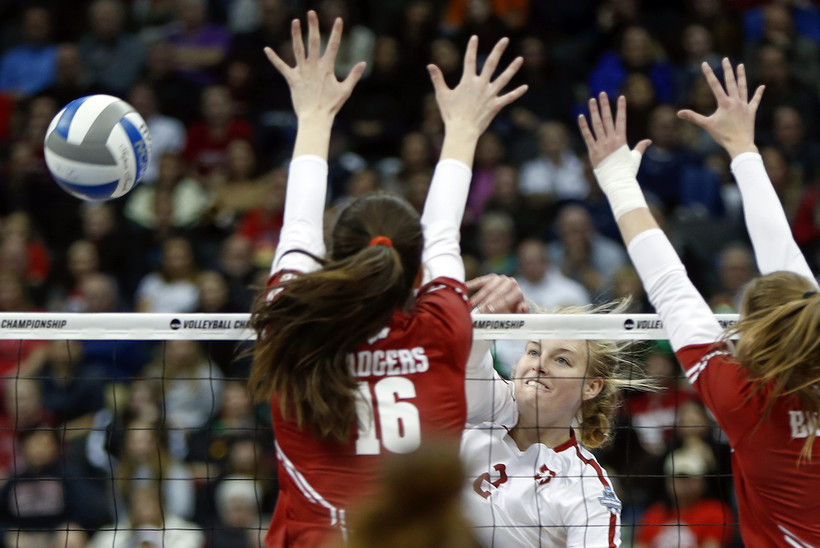 Badgers Were 1 Match Away From Their First Title
By Megan Hart
Share:

The University of Wisconsin fell short of winning its first national championship in volleyball Saturday.

No. 3 Stanford swept No. 4 Wisconsin in the final to take its third title in four years. The Badgers couldn’t quite play up to the high level set by Stanford early in the match. Stanford’s offense got off to a hot starting, hitting .441 in the first set. The first two sets went quickly to Stanford. Wisconsin managed to keep things closer in the third, until the Cardinal went on a 6-0 run that seemed to seal the match.

Stanford was led by Kathryn Plummer, a two-time national player of the year. She finished the match with 22 kills and 10 digs. She was named MVP of the tournament final and semifinals.

Wisconsin’s Molly Haggerty had 10 kills and 11.5 points Saturday. She had a strong tournament performance, with 15 kills in the semifinal. Haggerty, a junior, is among the many Badgers who should return to the team next season.

This was Wisconsin’s third trip to the final. In 2013, the Badgers lost 3-1 to the Penn State Nittany Lions, who went on to repeat as champions the following year.

Wisconsin struggled coming out of the gate this season, losing four of its first eight matches. Things turned around after a long team meeting. Badgers head coach Kelly Sheffield didn’t ask the players what they talked about, he said.

“All I know is that when we started conference (play) a few days later, they certainly seemed like a different team,” Sheffield said at a news conference in Madison last week.

Wisconsin went on to beat seven ranked opponents during the regular season. The Badgers swept Big 10 rival Nebraska three times this year, including in the regional final at the Wisconsin Field House. Wisconsin didn’t lose a set in its first four postseason matches.

The Badgers beat the No. 1 Baylor Bears on Thursday to earn their spot in the final. Wisconsin lost a close first set, before charging back to win three straight. Six-foot-eight junior Dana Rettke had 19 kills, eight blocks and three aces, while the Badgers managed to contain Yossiana Pressley, Baylor’s contender for national player of the year. Stanford beat No. 7 Minnesota in the semifinals.

This is Stanford’s ninth national championship in women’s volleyball, which has historically been dominated by small group of schools. Only 10 universities have won national championships in the sport, and there hasn’t been a first-time champion since Washington in 2005.

With a strong group of returning players, the Badgers will aim to build on their success and join that elite club next season.