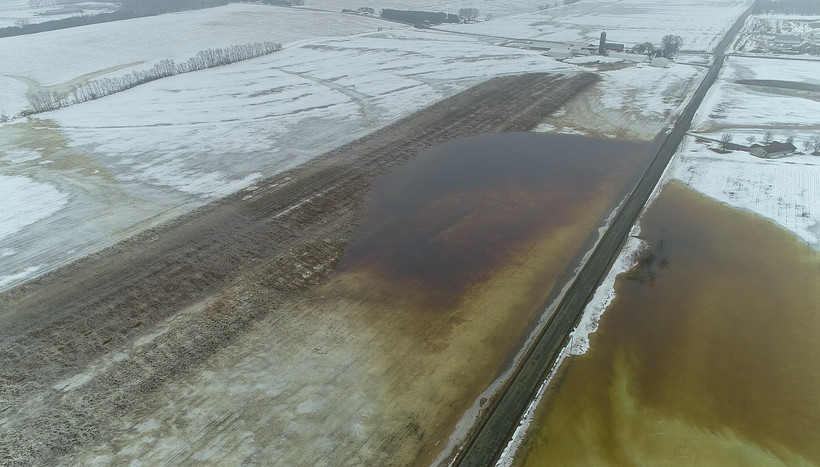 Manure runs off farm fields in the Yahara River Watershed as snow and ice melt. Photo courtesy of yaharaproject.org

Wisconsin scientists say recent flooding and heavy rains could lead to more blooms of toxic algae later in the year.

Steve Carpenter, director emeritus of the University of Wisconsin-Madison's Center for Limnology, said blooms of toxic cyanobacteria come from high levels of phosphorus pollution, which often comes from manure spread on farm fields. These blooms are more likely to occur after floods.

"We're having perfect storm conditions for runoff right now," Carpenter said. "There's snow melting, ice melting and we've had some big rains on it. That large amount of water can move a lot of phosphorus into streams and lakes."

The Runoff Risk Advisory Forecast from the state Department of Agriculture, Trade and Consumer Protection puts nearly the entire state at severe risk for runoff. 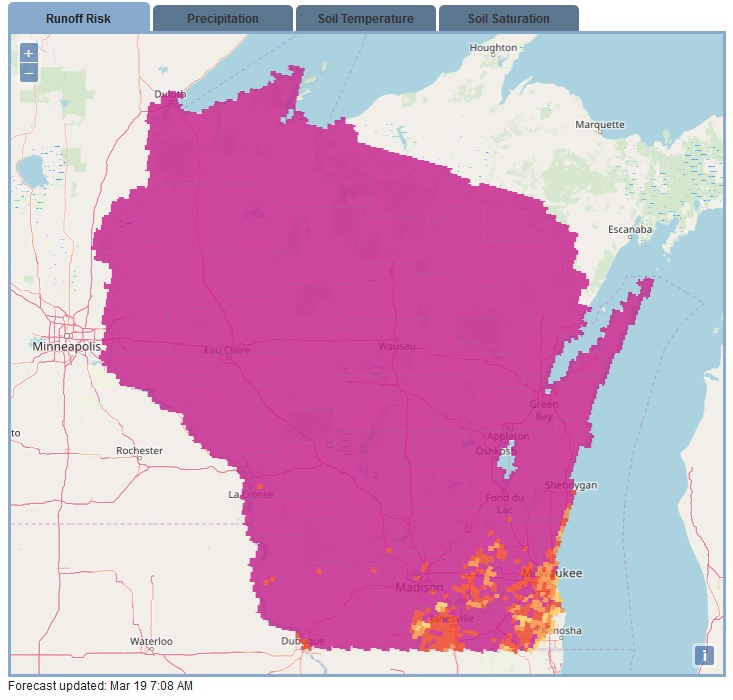 The Runoff Risk Advisory Forecast from the Wisconsin Department of Agriculture, Trade and Consumer Protection, March 19, 2019. The map shows a "severe" risk of runoff for nearly all of Wisconsin. Map courtesy of DATCP

"It’s always a bad idea to spread manure during high-risk runoff times, and we strongly advise against it," Richard Castelnuovo, DATCP chief of resource management, said in a statement Friday, March 15.

DATCP said farmers who must spread manure can contact crop consultants and county conservationists to identify fields that are less likely to see runoff.

Carpenter said while many farmers do hold back on applying manure to their fields in these situations, others don't.

"If you drive around the streams and just get out of your car and hike around, take a look at streams, you will see hot spots where somebody has dumped a whole lot of manure on a field," Carpenter said. "And that manure has found its way into a trout stream or into a tributary of a lake."

Carpenter posted on Twitter that he "checked Driftless area streams south of Wisconsin River," and found "an ocean of watery manure flowing into the streams."