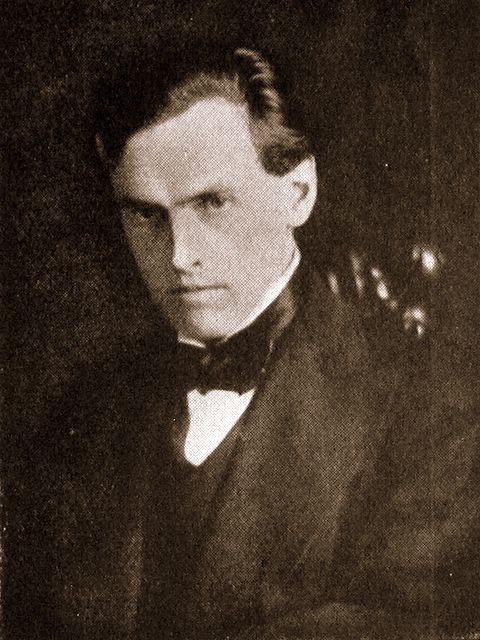 The 1921 American tour of English composer Cyril Scott was a financial and artistic success, but Scott declined an invitation to return.  He explained  that a second tour would interfere with his creative work.  He didn't mention that he had been advised to stay away--by a spiritualist.

In the 1920's spiritualism was a widespread phenomenon in England and America.  One of Scott's close friends was a psychic named Mrs.Nelsa Chaplin.  In 1921, just before Scott began his American tour he'd had a jarring encounter with the spirit world.

He'd been living alone in a small house in London.  A housekeeper came in every day for a few hours to cook his lunch and keep the place in order.  One day Scott telephoned to tell her that he was on his way home.  When he arrived he found that the housekeeper had committed suicide.  He found her wrapped up in a blanket with the gas-tube in her mouth.  She had left an apologetic note and several pawn tickets.  It turned out that she had gotten into financial difficulties and had pawned some of Scott's clothes.

Mrs. Chaplin put her talents as a medium to work got in touch with the distraught spirit of the housekeeper and put her at ease by telling her that Scott had forgiven her.

During his tour of the United States, Scott began to feel uneasy and sensed that his creativity was waning.  When he returned to England Mrs. Chaplin told him that he had come back with a sort of film over his aura.  Scott later recalled, "Not being aura-sighted, that conveyed little to me.  I only knew that it took me quite a time before I could see any beauty or poetry in anything again."

The year 1921 would bring a turning point for Cyril  Scott. He began to delve more deeply into spiritualism and married a novelist who was also in touch with voices from beyond the grave.