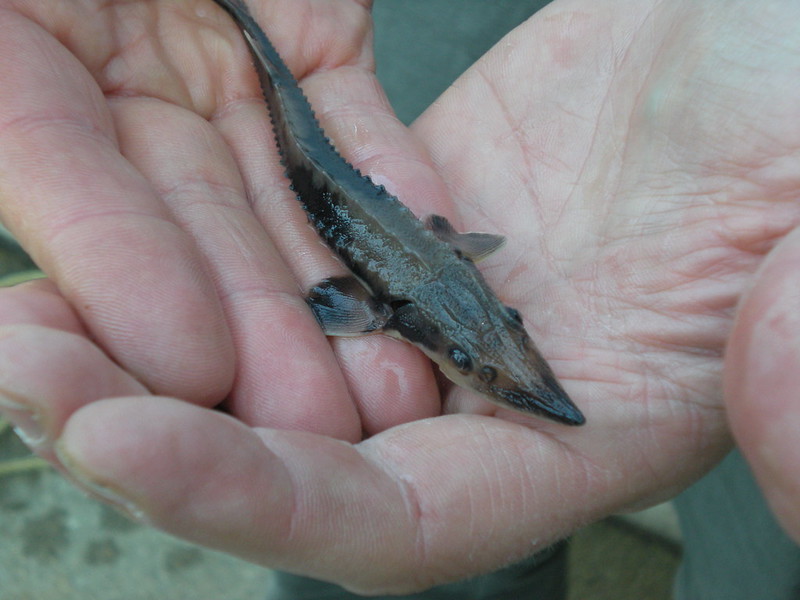 An operation at a dam on the Menominee River that relocates sturgeon upriver has helped biologists in their efforts to improve sturgeon populations and has given researchers a new way to track whether those sturgeon are spawning.

About 400 sturgeon were relocated farther upstream between 2015 and 2019 thanks to an elevator installation at the Menominee Dam, located about two miles upriver from the mouth of Lake Michigan at Green Bay. Bypassing the dams means the sturgeon are able to access their historical spawning sites — an important achievement for the sturgeon whose numbers dropped to the hundreds in the past few centuries.

Lake sturgeon number about 1 percent of their historical abundance, said Patrick Forsythe, an associate professor of biology at the University of Wisconsin-Green Bay who focuses on aquatic ecosystems and fish populations in the Great Lakes. Overharvesting and pollution have been particularly devastating to the populations, as well as dams that have blocked the sturgeon from getting to their spawning sites. Adult sturgeon exhibit homing behavior, which means that they return to spawn in the streams where they were born.

It's important to get the sturgeon to their spawning sites so that their spawn have a long section of river to live in during the first summer of their lives. The water at the spawning site is cleaner, warm, food-rich and mostly protected from larger predator fish, said Rob Elliott, a fish biologist with the U.S. Fish and Wildlife Service based in Green Bay.

"If they remain confined to only the lower three miles of river below the dams, then their level of reproduction is very limited," he said. 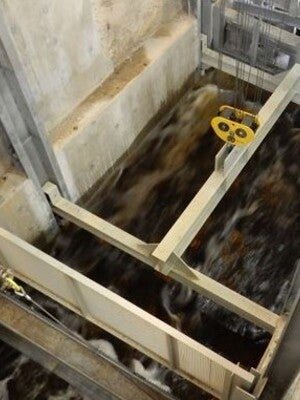 Sturgeon move in an elevator up about 20 feet into a holding tank. Photo courtesy of Rob Elliott, U.S. Fish and Wildlife Service

Forsythe is part of a group that is studying the migration of the sturgeon that have been moved farther upstream with the help of the elevators. The goal in his research has been to answer whether the sturgeon will stay upstream once they've been moved there, and if they'll go all the way back to their spawning locations.

Forsythe said that answers to those questions lie in the fish's genes.

"We're able to use genetic techniques to be able to tie a parent to an offspring, to a larvae that we collect in the spring at the time that spawning happens," he said.

Forsythe said that this past spring, researchers were able to catch enough larvae that they will soon be able to tie to their parents and determine where they're located — whether they're staying upriver or moving back down to Lake Michigan.

"Once we get through this winter and we're able to run the genetic analysis, we feel pretty confident that we should be able to find a few larvae that were produced by the fish that were passed with the elevator," he said.

Elliott said the behavior of the sturgeon upriver has been exactly what biologists hoped for.

More than 85 percent of those who were migrated have continued to move upriver more than 20 miles to higher quality spawning habitat. After the spawning season, they move back down the river, pass through the two dams and return to the lower river to feed. 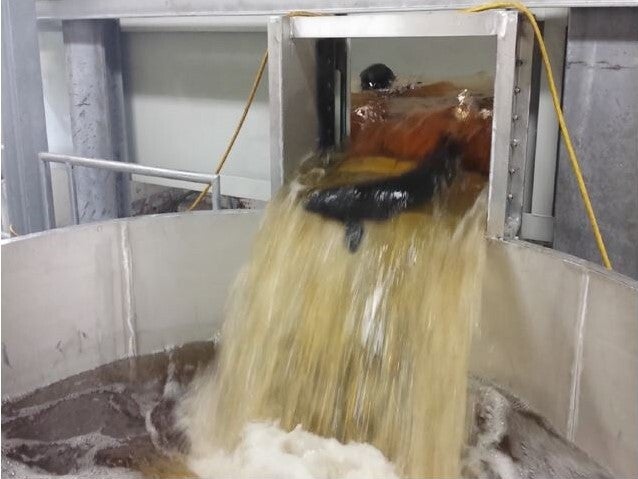 Sturgeon exist in about eight rivers around Lake Michigan. But the site at Menominee River is challenging for them, because the dams are so close to the mouth of Lake Michigan. That's why a fish elevator was installed there — to help sturgeon around the barrier and to their spawning sites, Elliott said.

Elliott said that fish elevators have been used for a long time to move fish above barriers, but it's new for sturgeon in the Great Lakes.

The Menominee Dam and the Park Mill Dam on the Menominee River are separated by about a mile and begin about two miles upstream from the mouth at Green Bay, Lake Michigan.

This situation was ideal for the installation of fish elevators, which Elliott said don't work everywhere. Specific conditions need to be met for them to be effective.

The sturgeon will come into the elevator that lifts them, in water, about 20 feet, and then spills them into a holding tank. From that holding tank, they're transferred into a transport trailer that takes them upstream an additional mile. This bypasses the second dam, which is a preferable method to building two fish elevators, Elliott said.

Elliott said during the first few years of operation, the goal was to pass 90 adult sturgeon each year: 30 females and 60 males. In fall 2019, that number was increased to 200 sturgeon per year because of how successful the program was proving to be. Elliott said another 100 fish could be transferred by October this year. 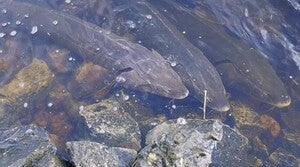 Sturgeon numbers in the Great Lakes have dwindled heavily over the years, due in part to dams blocking their spawning patterns. For the last several years, a fish elevator on the Menominee River has helped sturgeon find their way. We talk with two biologists about how it works and how they're...