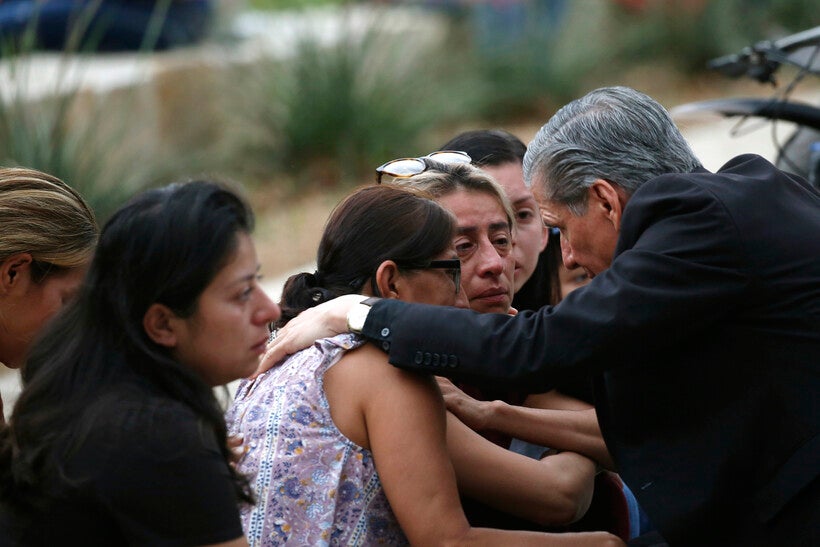 The killing of nineteen children and two teachers at the hands of a single gunman in Texas has renewed calls for action on gun reform in the United States, including calls from some of Wisconsin's congressional delegation.

On Tuesday, an 18-year-old gunman entered Robb Elementary School in Uvalde, Texas, and barricaded himself inside a classroom, "shooting anyone that was in his way," according to authorities. All the victims were in the same fourth-grade room, which law enforcement officers eventually broke into and killed the shooter.

According to The Associated Press, the gunman — who wore a tactical vest during the massacre — hinted on social media that an attack could be coming. He legally bought two AR-style rifles and 375 rounds of ammunition just days before the attack, soon after his 18th birthday, state senators briefed by law enforcement said. One of the guns was purchased at a federally licensed dealer. Investigators have not disclosed the gunman's motive. 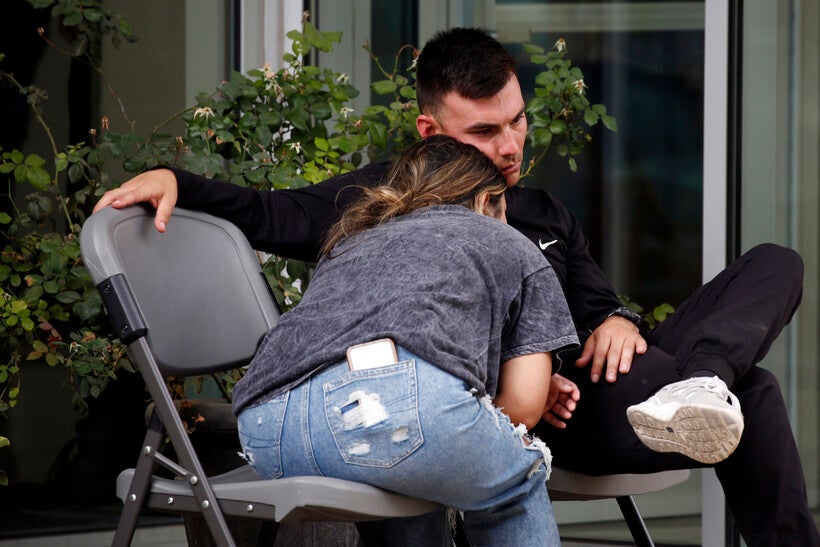 People wait outside of the Civic Center in Uvalde, Texas, Tuesday, May 24, 2022. An 18-year-old gunman opened fire at Robb Elementary School, killing multiple people. Gov. Greg Abbott says the gunman entered the school in Uvalde with a handgun and possibly a rifle. Dario Lopez-Mills/AP Photo

The attack was the latest in a seemingly unending string of mass killings at churches, schools, stores and other sites in the U.S. Just 10 days earlier, 10 Black people were shot to death in a racist rampage at a Buffalo, New York, supermarket.

In a somber address to the nation hours after the bloodshed in Uvalde, President Joe Biden pleaded for new gun restrictions.

But the prospects for any reform of the nation’s gun regulations appeared dim. Repeated attempts over the years to expand background checks and enact other curbs have run into Republican resistance in Congress.

Polling has repeatedly shown most Americans, and most Wisconsinites, support some limits on access to guns.

Marquette University Law School polling has repeatedly shown strong and consistent support for background checks on weapons sold privately or at gun shows, as well as red flag laws that let the court and law enforcement remove guns from someone a judge has deemed to be a danger to themselves or others. Family or friends can petition a judge to temporarily revoke someone's right to buy, own or carry a gun if it's believed that person may be a threat to themselves or others.

In the most recent polling on those issues, released in September 2019, 81 percent of Wisconsinites supported red flag laws, and 80 percent supported background checks. That held true across political parties, with no less than 70 percent support for either, regardless of party affiliation. However, a 2018 poll showed that despite their support, Wisconsinites were skeptical that new gun laws would reduce mass shootings — 57 percent said they would have no effect, 18 percent said little effect, 17 percent said moderate effect and 6 percent said they would help a great deal.

Charles Franklin, director of the Marquette poll, said the question about the effects of new gun laws has only been asked once, so the data is not as solid as it is in support for various other laws, but he said it is notable.

"People, including gun owners, are not in fact opposed to these measures, the background checks and red flag laws," Franklin said. "But when it comes to thinking you can do anything about gun crime or about gun violence, I think the public seems to be fairly hopeless about that."

On Tuesday, in the wake of the shooting, the majority leader of the U.S. Senate urged lawmakers to work together on gun reform legislation, according to The New York Times, and lawmakers on Capitol Hill were discussing what legislation both parties could support Wednesday.

Shortly after the news broke Tuesday afternoon, Democratic U.S. Sen. Tammy Baldwin went to Facebook and Twitter and called upon lawmakers to "step up" and "take on this public health crisis."

My heart breaks, again. A mass shooting at a school, again. More lives lost to gun violence, again. How many more times will we say again...and accept doing nothing? We have got to step up, take on this public health crisis, and start saving lives.

On Wednesday, U.S. Sen. Ron Johnson spoke on the U.S. Senate floor, calling on people to vote on legislation about school safety best practices. He introduced it in November 2019 following the Parkland shooting, and reintroduced it this session.

"It passed our (Subcommittee on Homeland Security and Governmental Affairs) unanimously, twice. It's a good idea, it could save lives, it's an action, when people are calling for action following this tragedy," the Republican said.

Johnson pointed out that the federal clearinghouse of school safety data mentioned in the legislation was already created under the last administration. His bill would make it law so that it's updated through future administrations.

In an interview with James T. Harris of The Conservative Circus, Johnson blamed the violence on the "secularization of society." He said he thinks "the solution is renewed faith, stronger communities, more supportive families — that's the direction, but unfortunately, that's not a direction, in many cases, our nation is heading. It's tragic."

NEW: Sen. Ron Johnson (R-WI), discussing the mass shooting at Robb Elementary School in Uvalde, TX, says the “secularization of society” and “loss of faith” are to blame.

“I think the solution is renewed faith.” pic.twitter.com/Z5hjblymEY

Johnson did not respond to reporters' questions Wednesday about expanding background checks. WUWM reported last week that Johnson said, after a series of shootings in downtown Milwaukee, that existing gun laws need to be enforced and additional law are not necessary.

U.S. Rep. Gwen Moore, a Democrat, took to Twitter Tuesday night and spoke as a mother, grandmother and great-grandmother.

"Our babies deserve better; they should be able to learn and grow without the threat of gun violence at their school, church, or grocery store," she wrote.

I’m a mother, a grandmother, and a great-grandmother.

Our babies deserve better; they should be able to learn and grow without the threat of gun violence at their school, church, or grocery store.

It’s time for my GOP colleagues to put our babies first and support gun reform!

On Tuesday evening, U.S. Rep. Mike Gallagher expressed his support for the families in Uvalde and for law enforcement.

"Today, the entire nation mourns with the Uvalde community and is grateful for law enforcement officers who responded to this senseless act of evil," the Republican wrote.

Rep. Gallagher on the heartbreaking tragedy in Uvalde, Texas: pic.twitter.com/a3hWOiSq7T

On Wednesday morning, U.S. Rep. Mark Pocan said the U.S. Senate must act on the legislation that has already passed the House of Representatives twice.

"We can't afford to wait any longer," the Democrat said.

We shouldn’t have to be afraid to send our kids to school, go to the grocery store, or just live in peace.

It's time for the Senate to pass gun violence bills already approved by the House.

We can’t afford to wait any longer.

In an emailed statement to Wisconsin Public Radio, U.S. Rep. Ron Kind called the gunman's actions "senseless." The Wisconsin Democrat also said all political parties need to come together in this moment.

"What happened in Uvalde is horrifying — 19 children and two teachers dead in a senseless act of violence," Kind said in the statement. "We can't accept this as our new normal. In order to protect our children, it's time to come together and take action on commonsense gun safety measures that are widely supported by gun owners and non-gun owners alike. Last year, the House passed the Bipartisan Background Checks Act and the Senate has got to do the same."