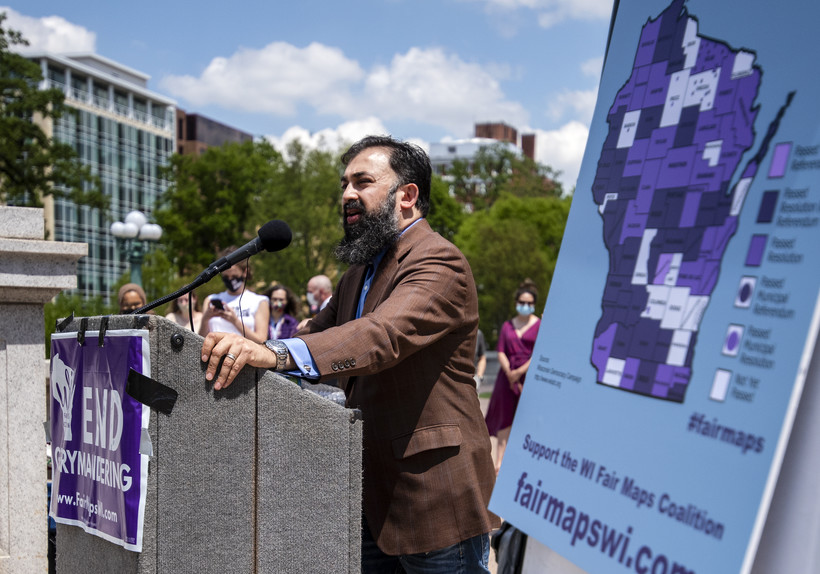 As the 2021 political redistricting process begins in Wisconsin, some counties across the state are pursuing nontraditional mapmaking processes that limit how much elected officials are involved.

A few weeks ago, the U.S. Census Bureau released the data necessary for state and local governments to begin drawing the political district maps that will be in place for the next 10 years. Local governments will be in charge of maps for city and county government, while state lawmakers will draw new district lines for the state’s 99 Assembly seats, 33 Senate seats and eight congressional districts.

While the maps set to be drawn by state lawmakers are expected to spur multiple lawsuits and create partisan conflict between Gov. Tony Evers and the GOP-controlled Legislature, some local communities across the state are pursuing mapmaking with more limited involvement from politicians.

State law sets a timeline for county governments to approve new county board district maps, but doesn’t dictate how those maps are drawn. Traditionally, the county boards themselves have direct oversight over redistricting but, for the current mapmaking cycle, Milwaukee and Dane counties are using processes they’re calling "independent" or "nonpartisan." The processes have never been used before, according to leaders in both groups.

In Milwaukee County, six retired judges appointed by the county board chair and approved by the entire county board will oversee redistricting. Under the process, the group will create guidelines for the maps, including parameters like districts being roughly equal in population, and convey those guidelines to an independent mapmaking organization. The new boundaries will then be vetted by the commission and subject to public input before being forwarded to the entire county board for approval.

DiMotto said the commission is meeting weekly, with a goal of getting county maps handed over quickly to city governments. Under state law, cities can’t begin their mapmaking processes for aldermanic districts until they receive tentative county district maps.

In Dane County, a new nonpartisan redistricting commission includes 11 citizen members appointed by the county board chair and the county clerk. Those members had to meet certain eligibility criteria, including not being a registered lobbyist or having had an official position with a political party or partisan within the past year, plans to run for election in 2022 or involvement in Wisconsin’s 2011 redistricting process. Under Dane County’s plan, the commission will accept and evaluate maps proposed by the public.

Nakia Wiley, vice chair of the commission and a Madison public school teacher, said the goal is for the commission to forward three maps drawn by members of the public for consideration by the full county board.

Wiley said the group is working to make sure Dane County residents know they can be involved in the mapmaking process, particularly residents from historically marginalized communities.

"We’ve been working very hard to make sure their voices are heard and that they’re aware that changes may or may not be made," she said.

If no maps submitted by a member of the public meet the necessary criteria established under state and federal law, Wiley said the commission will work to create its own map based on those submissions to submit to the board. She called the new process "a breath of fresh air."

"The commissioners, we’re just everyday people, we’re not politicians," she said. "We’re people who care about where we live and where we work and about our neighbors. I’m super excited we’re not a group of elected officials, who have their own agendas."

Brown County has also taken steps toward a nontraditional county redistricting process. According to public documents, a citizens redistricting advisory subcommittee met late last year to select leaders and outline how it would be involved in the mapmaking process.

Local maps are under a tight timeline this year because federal census data came to states months later than initially expected after pandemic-related delays. For new maps to be used for 2022 local elections, they must be in place by Dec. 1. Some local officials have raised concerns about meeting that timeline, saying the current set of maps should be allowed to stay in effect for those races.

A bill passed the state Legislature earlier this year that would have extended local redistricting deadlines and the lifetime of the current maps, but Evers vetoed the plan. In his veto message, Evers said the proposal would create too much of a delay in implementing new local maps, which he said are necessary to accurately reflect the past 10 years of population changes in communities across the state.