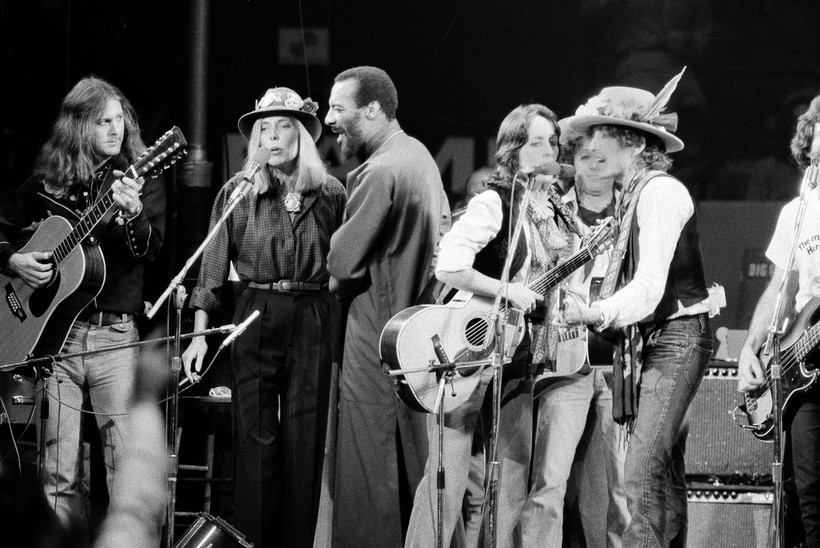 Rivka Maizlish is a doctoral student in the history department at the University of Wisconsin-Madison, with a focus on folklore, particularly folk music. She is also the 2018 Woody Guthrie Center Fellow, and this fall, she started a fellowship with Folkways Recordings and the Smithsonian Institution. She stopped by WPR to talk with Dan Robinson, the host of "Simply Folk," about folk music and her work as a folk historian.

Maizlish likes to tell a story about a Bob Dylan performance in 1966, with an angry crowd yelling at him to go back to France. Their anger was focused on what they perceived as Dylan’s betrayal of folk music, through his large backing band, his electric guitar and his lack of music about social justice.

"Suddenly," according to Maizlish, "(Dylan) says, sort of making fun of the audience, 'This next one is a folk song; I’m gonna play a folk song.' Immediately, everyone cheers. They’re booing, they’re jeering, they yelling 'Go to Vietnam,' then they cheer for the words 'folk song.'"

But Maizlish's work goes way beyond what happened during the folk music revival of the 1960’s.

"I’m interested in debates going back even to the 19th century over what is the meaning of folk and why is folk valuable in society, especially democratic society," she said. "So, here you have an example of just the power of the words 'folk song' to transform this crowd. They’re booing and suddenly they start cheering because those words have such meaning to them."

So what does Dylan do next? He plays, "Leopard Skin Pill Box Hat."

How, then, does Maizlish define folk music?

"I would say there’s no such thing as folk music, sort of to be provocative! I don’t like to define folk music, because I’m an historian who studies how people in the past have defined folk music. So mostly I see myself as someone who uplifts different voices throughout history making claims about what folk is, and I don’t really judge any of those claims as more legitimate than others," she said.

"I certainly think that some of them are sinister. People in the past have used folk music to claim this is a white country, and they claim that American folk is Anglo and comes from the U.K.," Maizlish added. "They held folk festivals in the 1920’s that were whites-only. I definitely don’t endorse that as folk, but that’s someone using folk to make a claim about American identity."

"Other people use folk politically to support unions, to support the Civil Rights Movement. They claim that’s folk. People have made claims about folk as a process that involves people coming together spontaneously playing music together and there’s no commercial production involved at all," Maizlish said. "I’m interested in all those claims, and I think folk is simply a tool that people have used to make a claim about what kind of country this is, what kind of country this should be, what kind of world we live in."

Maizlish sees folk as part of how society guides itself. "I guess I’m most sympathetic to the idea of folk as almost a democratic process, as being able to take a tradition from the past and make it your own, and especially shared in a group," she said. "It’s something that’s easier for amateurs to participate in as well. Usually folk songs have simple, repetitive choruses so that people can catch on. Or you can even make up your own lyrics as you go that speak to your own situation or your own life. And that’s what I think I value most in folk music."

Maizlish brought a few examples of folk music with her to the studio, including this song by Uncle Dave Macon:

Another song Maizlish points to is Buffy Sainte-Marie's "Codine."

"It’s a haunting song," Maizlish said, "and (Sainte-Marie’s) delivery and the guitar, is also very haunting ... It’s a ballad of personal trauma and it has universal appeal. Anyone who has experienced this addiction or suffering, or any kind of personal trauma and pain, can see themselves in it. That’s an aspect of folk music that people valued in the 1960’s, particularly when she would perform this song at the Newport Folk festival ... the universal quality of personal expression in folk."

Maizlish also brought along Tom Paxton's "The Last Thing On My Mind."

"It’s a beautiful song, but I think it’s interesting to hear (Paxton’s) voice in comparison to the (previous two songs). It’s very smooth and polished, and the other two songs are not like that," Maizlish said. "Folk music is often associated with a twang or an untrained voice, a haunting voice, a weird voice. But then at the same time, especially with Peter, Paul and Mary in the 1960’s, you get a lot of Joan-Baez-folk-musicians who have very pretty voices, very beautiful voices ... neither quality of voice is more folk than the other, but some people didn’t like the commercial, polished quality of a Tom Paxton or a Mary Travers and thought that was sort of inauthentic. At the same time, these people were revered by the 1960s folk revival as being great folk singers."

"This is why I wanted to write my dissertation about that question about folk and what is folk. I see it as a way of getting at all these other themes running through American history, of continuity and change, authenticity and insincerity, the authentic versus the commercial," she said. "How do you maintain your role in a tradition and still move that tradition forward and make sure it doesn’t die because of a desire to freeze it or own it?"

Maizlish concluded, "This is something that Bob Dylan was very concerned about and really argued when he was accused of betraying folk. He argued that it was his accusers who had betrayed folk because they were trying to own it or freeze it or make it one thing only, and he was saving folk because he was moving it in different directions."