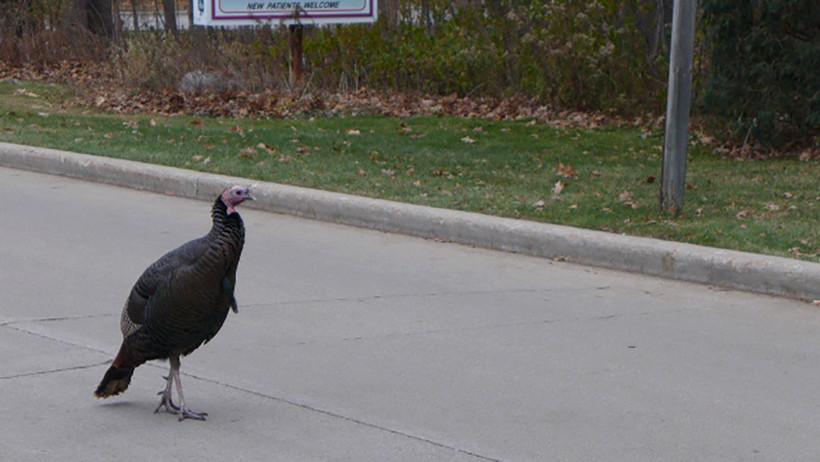 Smoke the turkey makes his way around the Green Bay suburb of Ashwaubenon. Patty Murray/WPR

Smoke The Turkey Dubbed The Unofficial Mayor Of Ashwaubenon

A charismatic wild turkey dubbed Smoke is engaging with people in the Green Bay suburb of Ashwaubenon.

Smoke was first noticed gallivanting around the neighborhood in the spring of 2018. Since then he has chased cars, children and bike riders, says Tammy Czachor, who lives near one of Smoke’s favorite intersections roughly a mile west of Lambeau Field off of Lombardi Avenue.

Czachor said Smoke is a loner unlike other wild turkeys that live in the neighborhood in flocks.

"He just does whatever he wants to do," she said. "He is the king of the area."

Smoke has a Facebook page with nearly 3,200 members, some of whom are from far-flung places like Germany, Wales or Australia. He was also recently profiled in The Washington Post.

The neighborhood even recently deemed Smoke the unofficial mayor of Ashwaubenon. The village doesn’t have an official mayor, instead it has a Village President, Mary Kardoskee, who did not return a request for comment on the usurpation of her position.

Czachor said the turkey has been deemed the unofficial mayor because, "he will just chase people out of here, like, 'Get the hell out of my neighborhood.'"

Despite his lack of fear for people, Czachor said Smoke has never harmed anyone, though he has been known to approach children getting on and off the school bus. Smoke also has a habit of investigating the local mail delivery people. Czachor attributes his behavior to a territorial matter. "This is his territory, this is his hood."

Matt Rupnik, senior animal keeper with the Bay Beach Wildlife Sanctuary in Green Bay, said his agency is not attempting to capture Smoke.

Rupnik said in general, the wild turkey population in Wisconsin is thriving. But he cautioned people not to feed the birds and not to get too close to them. Wild turkeys eat grass, insects and grains but they also feed from domestic bird feeders, he added.

But in this case, it is Smoke who seems to want to get close to humans.

Some social media users worry someone may accidently run the turkey over while he slowly struts through a busy intersection. Most drivers seem content to slow down and gawk at the large bird.

Czachor says Smoke has had a calming effect on the community.

"We have had so much division in this country with politics, especially on Facebook and that doesn’t matter when Smoke is around," she said. "I think that is a cool thing, he is uniting people."

As for her Thanksgiving menu, Czachor said, "I think I am going to have ham!"