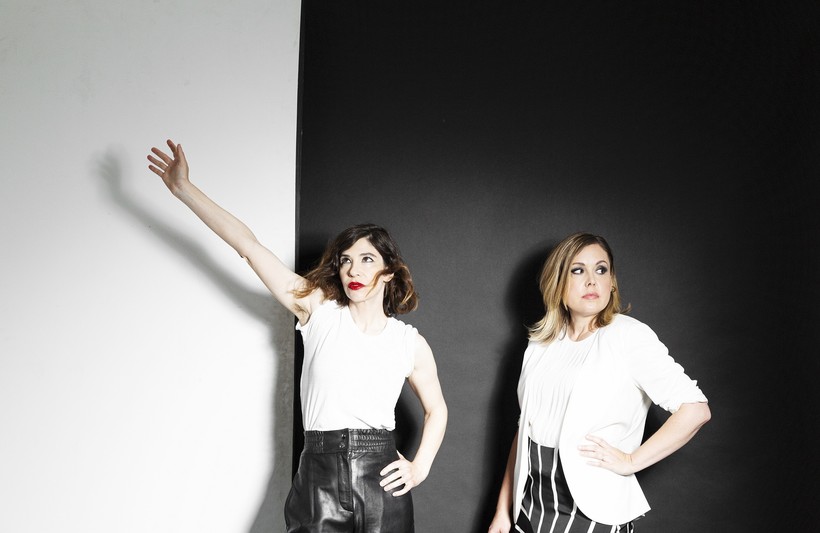 When Sleater-Kinney formed in the mid-1990s, they were a rock 'n' roll powerhouse from the start. Between Corin Tucker's commanding vocals, Carrie Brownstein's fierce guitar riffs and (eventually) Janet Weiss’s signature drumming, the trio quickly became one of the most influential bands of the era.

Sleater-Kinney has evolved since the '90s and just released their ninth studio album, "The Center Won't Hold." And while the album contains Sleater-Kinney's essential ingredients, it was produced by musician Annie Clark, better known as St. Vincent.

Clark helped add a new industrial and electronic element to the band, a sound that was a departure from the group’s previous albums. Shortly following the record’s release, Weiss left the group after 20 years as their drummer.

Maureen McCollum of WPR's "BETA" caught up with Carrie Brownstein — who you may also recognize from the comedy show "Portlandia." They talked about life after Weiss and the band’s musical evolution.

Maureen McCollum: I've been a fan of yours for many years now. You’re one of those few bands that I feel like I'm growing up alongside, like I’m witnessing and experiencing your musical evolution with you in some ways. Can you talk about that evolution and where you are right now as a band?

Carrie Brownstein: We've been a band for 25 years. Corin Tucker and I started this band way back in 1994 when we were still in college in Olympia, Washington.

When you start out, I think very few musicians imagine themselves one, five, 10 years down the road­­ — let alone over two decades. I think a goal with every record, every transition has been to challenge ourselves to do something different, to defy expectations. Eventually, we just reached a place where we wanted to set the bar higher for ourselves and to have a sense of freedom.

When you finally get to making your ninth studio album, which we just did, it really felt like, "What else do we have to prove?"

Our goal is to make music that doesn't sound like the last thing we did and to still enjoy it. To come at it with a sense of gratitude and always to do it with a sense of integrity and passion. To need it as much as the fans do because we understand that people want to feel seen and heard in our songs. We need to approach it with that same kind of urgency and that same sense of wanting to connect and belong within the context of music.

So yeah, that's kind of been our journey and we're sometimes as surprised as anyone that we're still making music. But we don't take it for granted at all.

MM: With this new album, "The Center Won't Hold," the sound of the music is completely different. But, your message and your lyrics are still so on course with who you are as a band. You have songs about longing, technology, the daily grind, working through dark times. So while it might sound sonically different, I still hear you as a band.

CB: Yeah I mean, fundamentally this is a band that's always merged the political and the personal. That's a very popular idea right now, but it's one we've been doing for a long time — a lot of other artists have as well. When we were surveying the political and cultural landscape, there is a sense of tumultuousness and fractiousness. We wanted to couch that in a more personal narrative and really speak to how chaos and anger and trauma and despair has an effect on the body, specifically the female body and the female psyche. I think a lot of this record is an exploration of that.

Those are themes that we've been grappling with on multiple albums. Your songwriting is who you are in the present day. So as you change and grow and age, your perspective on things shifts. The stories also reveal themselves in new ways and stretch out in new patterns. It's not uncommon to kind of go back and wrestle with the same ideas. Each time you return to that struggle, you're approaching it differently. That's kind of the nice thing about longevity — you get to retool things.

MM: Annie Clark, also known as St. Vincent, produced this album. Can you talk about how she pushed you musically in different directions?

CB: It started with just a change in methodology, where Corin was up in Portland and I was down in Los Angeles. Because we were not always writing in the same room — although we did sometimes — we were sending ideas back and forth on our computers and writing as much on synthesizer and keyboards as we were on guitar. So, the demos already had a different sonic palette.

And then Annie talked a lot about sounds that were kind of corrosive and ugly, kind of creating a paradox where you had some grittier sounds paired with a lot of melody. Those two worlds were kind of existing simultaneously.

I think we really saw the studio as an instrument in and of itself. So it became, you know, an act of discovery and not just documentation, which is a little new for us. Really, each song is a planet. Each song was just something that we could completely immerse ourselves in one at a time. That was something that Annie, aka St. Vincent, really encouraged from us — maximalism and a lot of imagination applied to each individual track.

MM: Yeah, it almost has this dystopian sound.

CB: Yeah, I think thematically we were circling around that sense of dystopian ideas. I think we wanted to match that sonically with things feeling tense and dire. Then, pairing that with choruses that really were bright, so that it didn't feel like a cynical record. I think cynicism is its own form of toxicity. We wanted glimmers of hope throughout.

MM: I want to ask you what your take is on the current state of music. I'm looking at some acts that you've been associated with over your career with Sleater-Kinney. So, we can look at Lizzo, who opened for you the last time your band played in Wisconsin. She's experiencing this meteoric rise. Another band you're somewhat associated with, Bikini Kill, they reunited this year. How are you processing musically what's going on right now? And how does Sleater-Kinney fit into that?

CB: I usually process things as a fan, you know? I love checking out new music. I like buying records. I like going to shows. I try to have a sense of curiosity. I tend to usually be listening to new stuff although, obviously, there's a ton of old stuff to dig through as well.

I think we're in a great, great time for music. It's accessible. It's copious. It is genre-bending and very fluid. It just feels like it has a powerful place right now. Certainly there's more diversity of artists and genres and that's really great.

I don't know how Sleater-Kinney fits into that landscape. I guess that's not really for me to determine — that's for other people to figure out. We just we do what we do and hopefully people like it.

MM: I have to ask about some of the transitions within your group. Obviously longtime drummer Janet Weiss left the band. You've picked up Angie Boylan as a new drummer. Can you talk about working with a new drummer and tell us a little more about Angie? Is that going to change the sound of Sleater-Kinney?

CB: I mean, we've never played these songs live, so I don't think that's going to be ... It's not like the songs from "The Center Won't Hold" have been out in the world live. I think for us, we're just looking forward to the future. We were sad that Janet left and we also wanted to continue. We really feel like it's a privilege to play in a band.

I think Angie is the really great drummer. I don't I think it's just about wanting to play the songs. We played a show in Raleigh and the response was great. For us, it's just about chemistry on stage and enjoying it.

In the live context, I think of all the disparate sounds on each record. You know the difference between "The Hot Rock" and "Dig Me Out" is massive. The difference between "The Woods" and "All Hands On The Bad One" is massive. So, there's always been these variations between albums, but it's in the live show that it all comes together under the umbrella of Sleater-Kinney. For us, it's just important to have a really powerful show and connect with the audience.

Sleater-Kinney will return to Milwaukee for a show at The Pabst Theater on Oct. 16, 2019, with special guest Shamir. Below is a video of Sleater-Kinney's "Entertain," performed the last time the group played in Wisconsin in 2015.

How does redistricting work — and where does the process stand in Wisconsin?
Milwaukee, Madison officials push back on new GOP election probe
COVID-19 booster shots for Moderna, Johnson & Johnson begin in Wisconsin. First dose for young children could be next
UW Health: Stress from the pandemic and skipped doctor appointments contributing to sicker patients
Assembly Republicans pass housing bills, but table vote on homelessness criminalization
More WPR News

COVID-19 booster shots for Moderna, Johnson & Johnson begin in Wisconsin. First dose for young children could be next
In Wisconsin, recall efforts add to pressure on school boards in the wake of COVID-19
GOP Senate leaders announce new investigation into Wisconsin's 2020 election
Defense use-of-force expert will be allowed at Rittenhouse trial
Wisconsin apple orchards seeing a shortfall this year