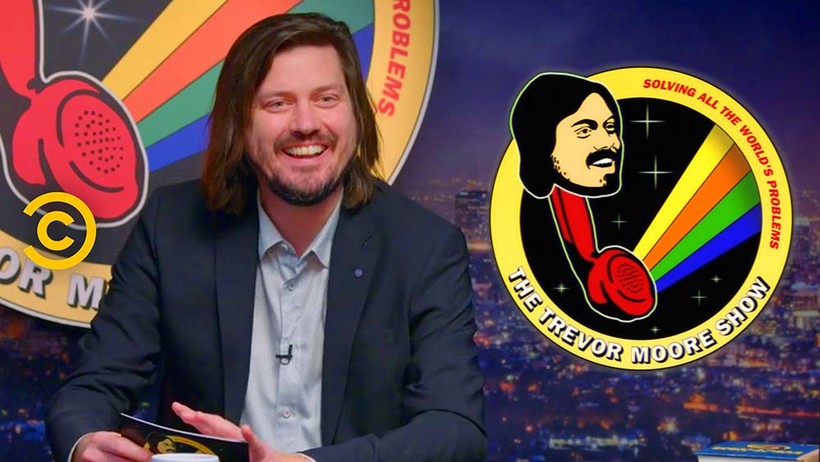 From Sketches To Late Night: The Journey Of Comedian Trevor Moore

Co-Founder Of Comedy Troupe 'The Whitest Kids U' Know' Is Back Behind The Desk For Season 2 Of 'The Trevor Moore Show'
By Adam Friedrich
Share:

If you pull back on Trevor Moore’s career, sitting behind a desk hosting a late-night comedy show seems inevitable. Moore — who helms Comedy Central's popular web series, "The Trevor Moore Show" — told WPR’s "BETA" he was always obsessed with the format.

"When I was a kid, I loved David Letterman," Moore said. "He was still on NBC and I would set the VCR to record him because I wasn't allowed to stay up and watch it. But I'd watch it when I got home from school the next day."

Moore would actually work for NBC later in life. After being selected for the prestigious NBC Page Program in 2002, he ended up with a recurring bit on "The Tonight Show with Jay Leno."

"I was like a correspondent for them. So, I had two different bits and twice a month I would go out and do a man on the street kind of routine for them," he said.

Moore grew up as the son of Christian rock singers. He said his conservative upbringing blocked a lot of comedy influences that many people are nostalgic for. Moore feels this helped him forge his own rebellious comedic voice and to aim for timeless content.

"I try not to be too pop culture-based in comedy. And maybe that's a defensive mechanism," Moore continued. "I definitely think that because everything was very conservative and had to be very clean that pushes you in the other direction. Like 'The Whitest Kids U' Know' was constantly getting flack for being a very dirty, very kind of blue sketch show. And I think that's just kind of natural teenage rebellion."

'The Whitest Kids U' Know' — or WKUK — was the sketch comedy troupe Moore formed in the late 90's with Sam Brown — who is also a part of "The Trevor Moore Show" cast. WKUK found a lot of success on comedy circuits and at comedy festivals eventually landing their own TV show.

It was here where Moore's conceptualized comedy found a great outlet and actually became a focal point of a landmark Supreme Court case. In a sketch he wrote and performed titled, "It's Illegal to Say..." Moore has wordplay fun with the United States law prohibiting threats against the president.

"I called the ACLU and I was like, 'Hey, am I getting in trouble for this? Is this fine? Can I do this bit?' And they're like, 'We can't advise on that kind of thing," explained Moore. "But they did say, 'If you did get in trouble, we would defend you.' And I was like, 'Well, OK, that's enough for me.'"

The twist came when a man who was harassing his ex-wife on Facebook posted the entire bit replacing "president" with his ex-wife's name. The man was arrested on threats, but argued that a social media post isn't a threat because it was satire and his other threatening posts were his own rap lyrics. That led to the 2015 Supreme Court case Elonis v. U.S. that was the first to deal with freedom of speech in the social media realm.

"The thing that makes me laugh is that all the Supreme Court justices had to sit and watch our dumb sketch show," Moore quipped. "And they ended up ruling that it was satire and it was comedy and the guy couldn't get in trouble for that stuff. So, I don't think it's a good outcome or a bad outcome, but that's what happened."

In 2018, in an effort to promote his comedy special "The Story of Our Times," Trevor convinced Comedy Central to let him do a 24-hour telethon leading up to the airing. The event pitted Moore against sleep and featured an ongoing rotation of comedians, guests and callers and laid the groundwork for "The Trevor Moore Show."

One of the comedians who was booked for the telethon was Blair Socci. She caught Moore's attention and ended up landing the Andy Richter/Ed McMahon role on his show.

"Blair is just a hilarious comedian who I had never met until she came on the 24-hour show. Every hour in the show, we would do a different thing. And we were talking about the singularity and like A.I. and whether or not A.I. will overtake mankind in 2045, which is what Ray Kurzweil has predicted," said Moore. "And Blair was on, and she just made the whole hour hilarious because she just didn't care about the computers. She just kind of cut through it all. She was just making jokes all the time."

"It just kind of worked so well that when they asked me to do this thing regularly, I was like, well, what about having Blair as the co-host? Because she's hilarious," he added.

In addition to continuing his show, Moore, Brown and the rest of the WKUK troupe are working on creating an animated movie. They have been crowdfunding it through performing sketches on Twitch TV.

"It's about a couple of billionaires race to put a city on Mars," Moore said of the film. "That's the kind of line that we like to hit where it's like, alright, we're not talking about Elon Musk, we're not talking about (Richard) Branson or (Jeff) Bezos or any of these guys, but we're going to talk about this. What's happening in society right now is like all these rich guys are about to start colonizing the moon because we think that's still going to be an issue 20 years from now. It's not going to age itself out quickly."

All episodes of Seasons 1 and 2 of "The Trevor Moore Show" are available to stream on Comedy Central's YouTube channel.