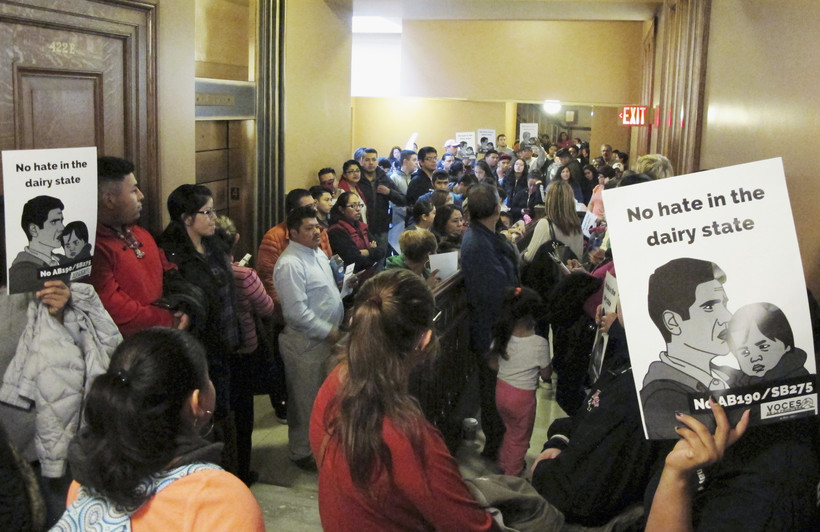 Opponents to a bill in the Wisconsin Legislature that would outlaw "sanctuary cities" gather outside of a hearing room Thursday. Scott Bauer/AP Photos

A state sanctuary cities bill, a new executive order for health care and a reorganization proposal for the University of Wisconsin System. Our guests discuss those issues and other top state and national political stories in the Week in Review.

A state Senate committee held a public hearing Thursday on a bill that would prohibit local governments from enacting policies that would prevent federal immigration laws from being enforced. Supporters say the measure is needed to protect Wisconsin communities. Opponents say it would promote fear and division and harm police-community relations.

After failures by Congress to repeal and replace Obamacare, President Donald Trump used his executive pen to give people more options for buying health insurance. Trump’s order would also allow some groups to purchase coverage across state lines. Despite the move, he insisted Congress work to repeal the Affordable Care Act.

University of Wisconsin System President Ray Cross unveiled a proposal to boost enrollment at the state’s two-year schools, which has dropped 32 percent since 2010: merge them with Wisconsin’s four-year universities. Under the plan, more classes would be available to two-year students and transfers to the four-year schools would be streamlined.

Journalist and blogger Steve Prestegard and former Portage County Democratic Party Chair Lon Newman join us for the hour. Which political story from the week do you want to discuss? How do you feel about prohibiting sanctuary cities? Is Trump’s executive order good or bad for health care in America? How does the UW System’s restructuring plan sit with you, especially if you attend one of the two-year schools? Call us a 1-800-642-1234 or ideas@wpr.org. You can also tweet us @wprmornings or post on the Ideas Network Facebook page.