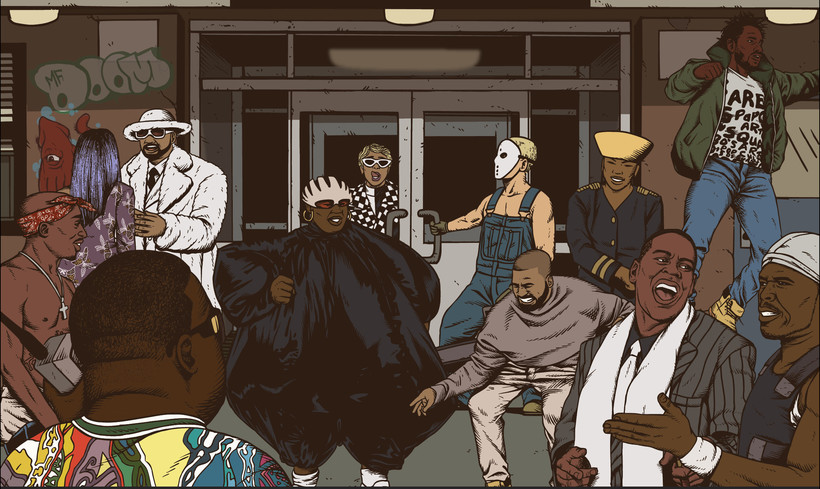 The third and final book in his best-selling trilogy is his perhaps his most personal
By Adam Friedrich
Share:

When Shea Serrano was 17, his father bought him his first car. Freshly minted with a tax return check, Shea and his dad found a small, "kind of sketchy" dealership around their hometown of San Antonio, Texas.

It was there when Serrano became the owner of little red Hyundai with one particular special feature.

"It had a CD player in it," Serrano said. So, he popped in the "Harlem World" CD by Ma$e and felt the first pangs of teenage freedom. It was then that listening to rap became an even more heightened experience.

"I just felt like I was the king of the world while I was listening to that album in that car, riding around on my own for the first time," Serrano recalled.

It's no surprise to learn that part of the dedication to Serrano's latest book, "Hip-Hop (And Other Things)" reads as follows:

"to listening to rap while driving around in a car. Rap sounds better in cars. I don't know why that's true, I just know that it is."

Like the two before it, Serrano structures the book as a fun and engaging series of thought experiments about the subject matter (hence the unifying subtitle of "A collection of questions, asked, answered, illustrated), but this final entry is clearly the most personal.

"I've been really excited about this book in particular, because when (Torres and I) started the series out, we said, 'Hey, what's the one we want to end on?'" Serrano recalled. "Which of those do we want to be like the anchor, the big finale? You know you got to finish strong. You don't want to 'Godfather III' the situation. You want to 'John Wick 3' the situation like a big flurry."

"We really, really care a great, great deal about rap," he continued. "So, let's end on that one. So, we made that decision six years ago in 2015 when we started working on all these. So, I've been really excited about this, and that's why it's No. 1 for me, just because we knew we were going to land here."

The book is laced with fun angles and approaches to seminal rap albums, artists, groups, beefs and debates that offer as much intrigue and history as they do fun. It's almost like a book version of Serrano's popular rap podcast, "No Skips."

In an early chapter, Serrano ponders the legacy of Missy Elliott, her place in rap history, and more specifically, how she revamped women's roles in rap. The chapter shares the sad saga of how her successful behind-the-scenes career hit the harsh reality of the spotlight.

Serrano lays out how Elliott wrote, produced and had a featured verse on the 1993 song, "That's What Little Girls Are Made Of" for then child rapper Raven-Symoné. However, when the time came to film the video, unbeknownst to her, Elliott's verse was lip-synced and filmed by another woman.

"There's like a thinner woman with lighter skin, she was doing Missy's parts. And they told her that she just didn't have the right look to be in the video," Serrano said. "And this is, of course, the thing that broke Missy's heart."

A few years later, Elliott released her debut album, "Supa Dupa Fly." The lead single "The Rain" — which is arguably the most iconic Elliott song and helped the album achieve platinum status — featured a music video with a not-so-subtle statement. The Hype Williams-directed video showcased Elliott in a now famous inflated black leather outfit shot through a distorted fisheye lens.

"She's exaggerating all of the things that they said were wrong about her in the beginning. You know her, her size, her color, her shape, her everything, and she's like, 'No, here's a bigger version of all of it,'" Serrano said. "And from that moment forward, everybody knew like, 'Oh, this is a special artist that we're watching here.' It's really a great moment in rap by itself, but then you learn that part, and you're like, 'Oh, this meant even more than you knew at the time.'"

Throughout the book, Serrano posits fun chapters on sorting out the best rap duo of all time or offering his thoughts on Biggie vs. Tupac or trying to figure out what album was better between Kanye West's "My Beautiful Dark Twisted Fantasy" or Kendrick Lamar's "Good Kid, M.A.A.D City."

"You start out with a question, and then you just go, 'OK, like, how do we pick this apart?' Serrano said. "I want you to walk me through, 'How did you get there?' Because I have found that people are much more receptive to a result, to an answer of a question, if they know how you arrived at that thing. It makes for a much more interesting conversation or reading experience."

Serrano also sifts through the legacy of Nas' 1994 pantheon-worthy debut, "Illmatic" by ranking the lines on the album as the most "Nasian." It provides a necessary and unique perspective to one of the most acclaimed rappers and albums of hip-hop's history.

"Number one, Nas is maybe the greatest writer in rap ever, and this is when he did the best writing of his career," Serrano said. "And it is at once an album that plants a flag in a moment in time and says, 'This is what rap sounds like in New York in 1994 at its highest level.' But then also it like peeked forward as well. This is what hopefully rap will sound like for the rest of time."

"(Illmatic) was like all of the things you wanted to see in a rapper and in a rap album all at once, and it came from a kid," Serrano said. "He's in his early 20s when he does this so seemingly out of nowhere, and it just presents you with this brilliant piece of art. And everybody freaked out about it, and it didn't matter how much you freaked out about it or heard about it beforehand. When you got the chance to listen to it, it always was better than you thought it was going to be."

Although he's firm on this being the final book in the "And Other Things" series, Serrano jokes that if he was forced (or was given enough crazy money) to write another installment, he'd probably land on television as the subject for his next collection of questions asked, answered and illustrated.

"'Television (and other things)' would probably be the one that made the most sense, because if you can connect it, it's very easy to draw a line from like basketball to hip hop. We can draw that same line from movies to television," says Serrano.

Hopefully, Serrano's next car that he buys has a television in it.