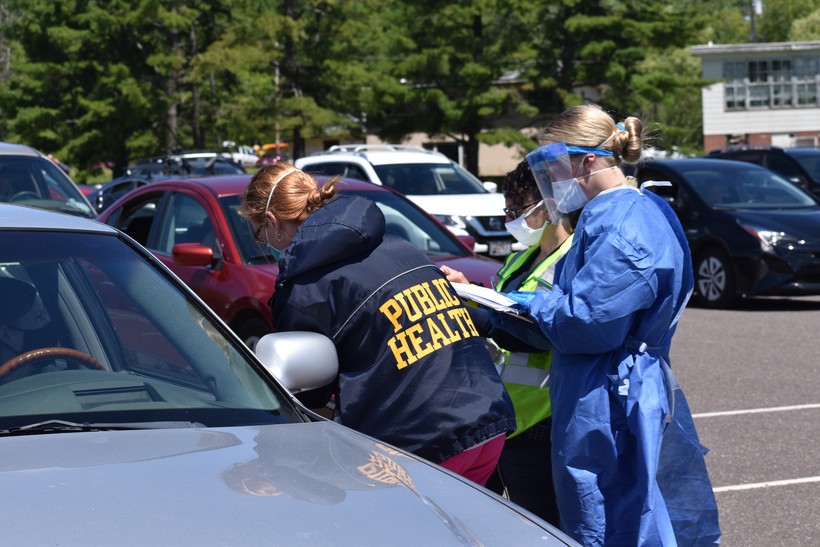 Several northern Wisconsin counties have issued advisories to wear face coverings and another has rolled back recommendations on group gatherings after a recent spike in coronavirus cases. The move comes as 59 counties now have high activity levels for COVID-19.

However, the advisories are not a mandate and there are no penalties for those who don't wear them. Officials said they're not prepared to go that route just yet. Ashland County Public Health Officer Elizabeth Szot said they hope the advisory will help people realize the importance of masks in reducing the spread of the virus.

"We are hopeful that people will take social responsibility to wear a mask or a face covering of some sort to not only protect themselves, but to protect others in our communities," said Szot.

Since March, the counties had seen only a few confirmed COVID-19 cases, but over the last two weeks the number of positive cases has grown to eight in Ashland County and 11 in Bayfield County as of Wednesday afternoon. Health officials have tied the recent increase to a hockey event in Ashland that resulted in 13 new cases across Michigan, Minnesota and Wisconsin.

"I don't know that people were always practicing social distancing," said Szot. "And from some of the interviews that we've conducted and from some of the feedback that we've heard from participants or people with first-hand knowledge, not everybody at the event was utilizing face coverings or masks."

Iron County Public Health issued its advisory on Wednesday after the county saw a spike of 14 cases over five days, according to Zona Wick, registered nurse and the county's former health officer.

"Obviously, in a small county like ours, we have only 5,000 people, that is a significant increase," said Wick.

The county now has 24 cases and the recent spike appears to be tied to recent July Fourth celebrations and an increase of visitors to the area. Wick has been back at Iron County Public Health, helping the county with contact tracing.

"Prior to that, we were averaging about two cases per week. We're now at two to three per day," said Sauve. "With the rapid increase in cases in Barron County, all of our neighboring counties, in our state, and in the nation, we felt it was necessary to take these steps to protect the health of our community."

Sauve said their cases are also tied to gatherings of friends and family, as well as travel out-of-state. They're urging people to limit contact with others and avoid trips to distant locations whether in Wisconsin or outside the state.

Meanwhile, Superior's Committee of the Whole voted 9 to 1 to pass a resolution bringing the city one step closer to requiring masks. Masks would be required at all indoor public places and while riding in a bus or taxi unless exempted.

Douglas County, where Superior is located, has seen cases almost triple since the end of June to 65 confirmed cases as of Wednesday.

"We've got to do something to stop this from spreading, and, if that's what it means, to have a mask on, that's what we should do," said city council member Esther Dalbec who introduced the resolution.

The Superior City Council is set to take up the mask requirement resolution at its July 21 meeting. If passed, the mask mandate would remain in effect from July 27 through Sept. 25.

In north-central Wisconsin, a testing event in Abbotsford confirmed 31 new cases in Clark and Marathon counties after 411 people were tested for COVID-19 last week, with more cases still pending.