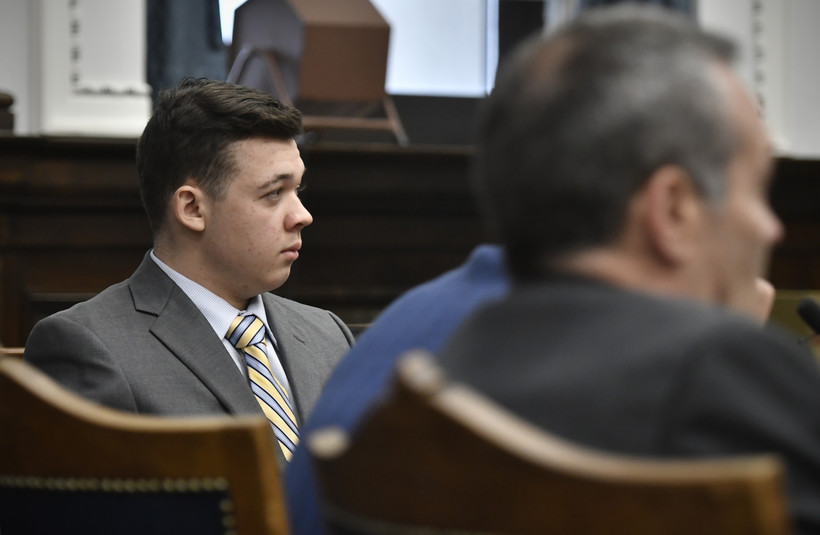 Kyle Rittenhouse listens as the Judge Bruce Schroeder talks about how the jury will view video during deliberations in Rittenhouse's trial at the Kenosha County Courthouse in Kenosha, Wis., on Wednesday, Nov. 17, 2021. Sean Krajacic/The Kenosha News via AP

For a second time in the Kyle Rittenhouse homicide trial, the defense has asked the judge to declare a mistrial.

Attorney Corey Chirafisi told Judge Bruce Schroeder the defense did not receive the same quality drone video footage shown to the jury during the two-week trial. The drone video depicted the encounter between Rittenhouse and the first man he shot and killed, Joseph Rosenbaum, 36.

Chirafisi said because the defense didn't realize they weren't given the same evidence as what the state had until after it was presented to the jury, Rittenhouse was not receiving a fair trail.

The jury asked to see several videos including Rittenhouse being chased after shooting Rosenbaum and his encounters with Gaige Grosskreutz, the third man he shot and the only survivor. They spent about an hour Tuesday reviewing the videos.

If the jury finds Rittenhouse innocent of all the charges he is facing, the mistrial filing will have little relevance. But if there is a conviction, the defense will have grounds for an appeal.

Schroeder said he was not going to rule on the mistrial request at this point because the jury is already in deliberations.Still, he told the state he had felt "queasy" about the drone video throughout the trial because it was given to the prosecution by an unknown source.

"We might as well follow through with it and if they've (the state) got everything correct and it's reliable then they won't have a problem and if it isn't then it's going to be ugly," Schroeder said.

Last week, the defense asked for a mistrial with prejudice, meaning if it is granted, the state could not refile charges against Rittenhouse.

Jurors met for a full day Tuesday after two weeks of testimony in which they were given starkly different portrayals of Rittenhouse's actions the night he shot three men, killing two, on the streets of Kenosha last year. Rittenhouse is accused of fatally shooting Rosenbaum and Anthony Huber, 26, and wounding Grosskreutz, now 27.

Prosecutors say Rittenhouse was a "wannabe soldier" who provoked a confrontation, while the defense says he feared for his life and acted in self-defense.

Rittenhouse, then 17, traveled to Kenosha from Illinois during a tumultuous night of protests against racial injustice and polite brutality in the summer of 2020. The unrest followed the police shooting on Aug. 23, 2020 of Jacob Blake, a Black man. Blake is paralyzed from the waist down. 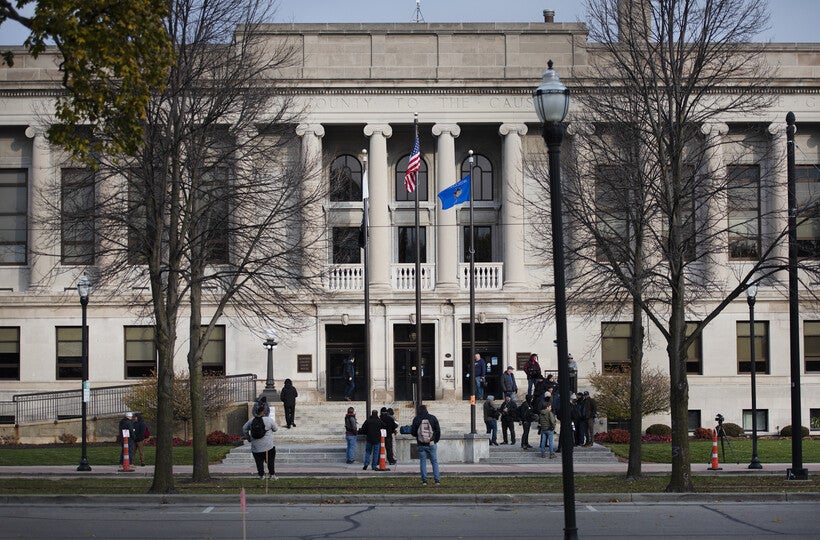 Reporters and photographers stand on the steps of the Kenosha County Courthouse before the jury begins deliberation in the Kyle Rittenhouse trial Tuesday, Nov. 16, 2021, in Kenosha, Wis. Angela Major/WPR

Schroeder issued jury instructions Monday. The instructions included the lesser charges, giving the jury more options if they're unable to agree on homicide and attempted homicide charges against Rittenhouse. Schroeder also dismissed the misdemeanor charge of possession of a dangerous weapon by a minor. Rittenhouse was armed with an AR-style semi-automatic rifle. Wisconsin law prohibits minors from possessing firearms except for hunting.

Throughout the two-week trial, the city of Kenosha and the area outside the downtown courthouse have remained relatively quiet.

On Tuesday, around 40 people gathered outside the Kenosha County Courthouse, some in support of Rittenhouse and others supporting the men shot by Rittenhouse.

Among the crowd was Tavis Grant, national field director for human rights organization Rainbow PUSH. He said the case is an example of a "white privileged, white entitled justice system" and a "Black and brown disenfranchisement system." 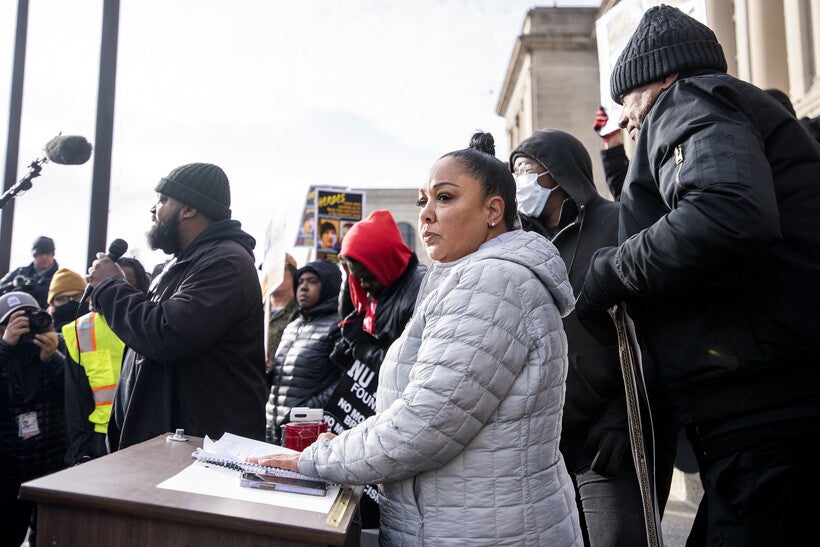 Tanya McLean, founder of Leaders of Kenosha, prepares to speak to reporters in front of the Kenosha County Courthouse on Tuesday, Nov. 16, 2021, in Kenosha, Wis. Angela Major/WPR 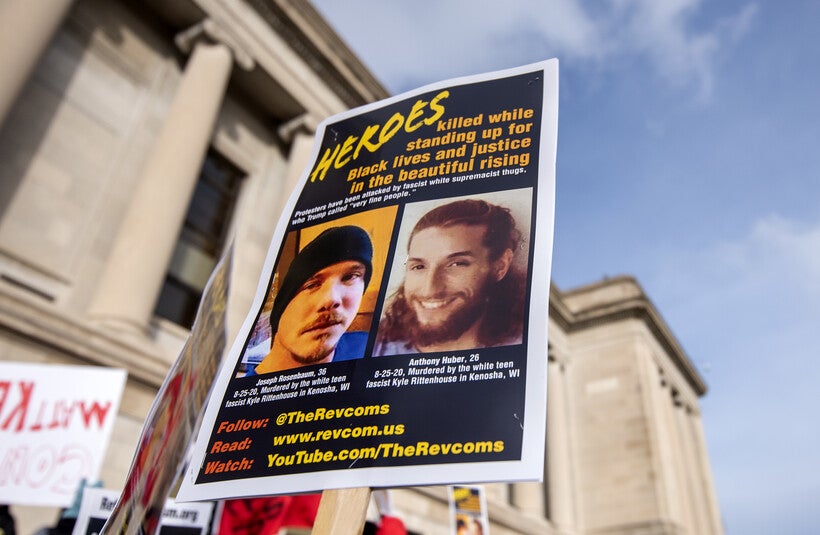 Tanya McLean, founder of the community group Leaders of Kenosha called for peace while waiting for the jury's verdict.

"We vow to continue to prioritize the safety of our community. We denounce those who feel emboldened by the murders of Anthony and Jojo to threaten, hurt and kill us, to follow us home, to scare us and to try to intimidate us, but we will not be intimidated," she said Tuesday outside the courthouse. "Anyone threatening to come to our city to kill, hurt, threaten or do damage is absolutely not welcome."

State and local authorities are readying for response to the jury's verdict. The Kenosha County Sheriff's Department and Kenosha Police Department issued a joint press release stating law enforcement has worked for the past year to improve "response capabilities to large scale events."

"At this time, we have no reason to facilitate road closures, enact curfews or ask our communities to modify their daily routines," the statement read.