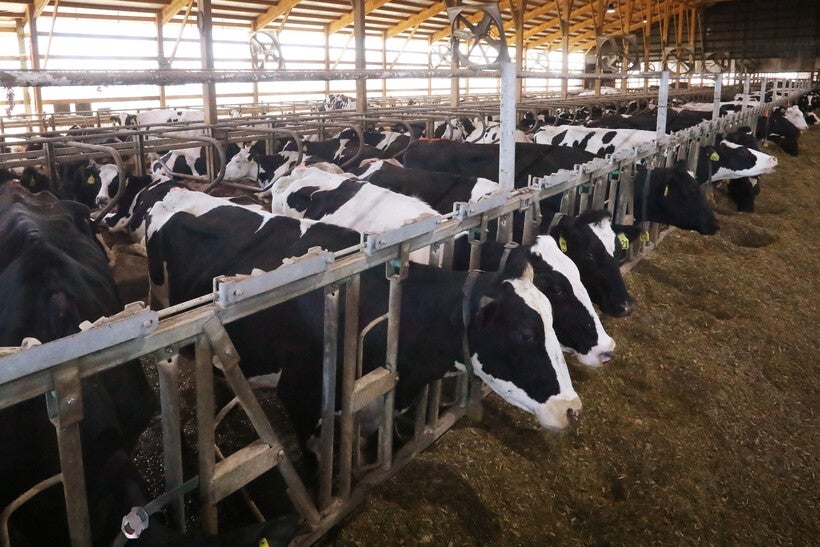 Dairy cows are seen at a concentrated animal feeding operation, or CAFO, in Buffalo County. Between 2012 and 2017, the number of animals living on factory farms in the U.S. grew by 14%, even as the overall number of operations shrank. Photo courtesy of Coburn Dukehart/Wisconsin Watch

Researchers are exploring how much a diet including the grass could reduce methane emissions from cattle
By Courtney Everett
Share:

Feeding dairy cows a diet including seaweed may reduce their emissions of the potent greenhouse gas, methane, by up to 20 percent, according to initial results from University of New Hampshire researchers.

But for Wisconsin farmers who oversee more than 6,000 milk dairy cow herds, switching to seaweed could pose major challenges: the grass may be difficult to find locally, and it could reduce milk production.

The United Nations estimates methane is 80 times more potent than carbon dioxide. And cows emit a lot of the gas as part of their digestion. The average cow burps every 90 seconds, releasing about 264 pounds of methane annually, according to the organization World Animal Protection.

Brito said researchers are exploring whether feeding seaweed to cows can reduce methane emissions, because the plant is known for having a complex set of bioactive compounds.

“Some of these compounds … have been shown to reduce methane basically by inhibiting the growth of the microbes that produce mad things in the cow stomach,” Brito said.

The New Hampshire studies are testing different varieties of seaweed to see which might be best. For example, some brown seaweed appears to reduce stress in cows while red varieties show evidence of affecting milk production in short-term studies.

“We need more research and more data to be more certain about the impacts of the seaweeds,” Brito said. “Any novel feeding strategy needs to be profitable and safe for the animals.”

For Wisconsin farmers, another challenge of using seaweed could be the economics of acquiring the grass. It could be costly to ship to the Dairy State or grow in its environment. Brito said creating local aquaculture systems may help, though.

“There (are) some companies doing that in Hawaii. That may be a possibility to scale this up and then make this more feasible to be fed at the farm level,” he said. 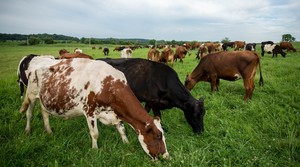 According to the Environmental Protection Agency, a single cow can produce up to 264 pounds of methane each year. We head to a research farm at the University of New Hampshire to learn how seaweed eating cattle could be the answer to climate change.