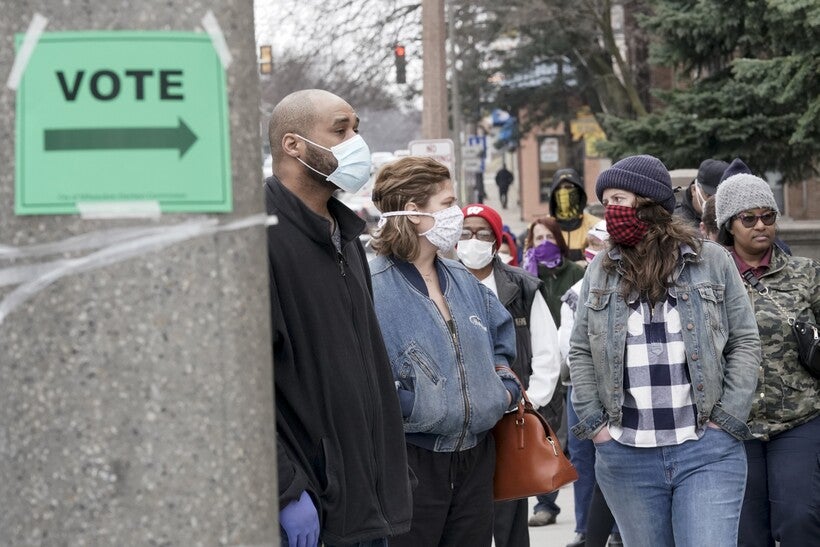 Voters masked against coronavirus line up at Riverside High School, one of only five polling locations in Milwaukee, for Wisconsin's primary election April 7, 2020. Morry Gash/AP Photo

'This Is A Sea Change': Federal Judge Hears Arguments In Pandemic Voting Case

Thousands of Wisconsin voters could be disenfranchised this November if a federal judge doesn’t step in to temporarily change some Wisconsin election laws, a coalition of lawyers for the state and national Democratic Party and several nonprofit groups argued Wednesday before a federal judge.

The legal challenge combines four unique lawsuits that contend several Wisconsin voting laws shouldn’t be allowed to stand during the COVID-19 pandemic because they make it too difficult for people to vote as the virus spreads. Two of the lawsuits were filed before the April 7 presidential primary and have been extended to apply to November’s election. Two others were filed after April’s election.

"We are in the midst of what everyone knows is a lethal, once-in-a-century pandemic," said John Devaney, a lawyer for the state and national Democratic parties.

The challenge is asking the federal court to extend the state’s online voter registration deadline, as well as the deadline for mail-in ballots to be received by election officials. The court did both of those things for April’s election. According to the Wisconsin Elections Commission, 79,000 additional ballots were counted in April thanks to the court’s six-day ballot receipt extension and roughly tens of thousands utilized an extended online voter registration window.

During arguments, federal judge William Conley said he believes current deadlines for mail-in ballots make it very possible some ballots may arrive too late to be counted.

"Absentee ballots requested five days before the election are simply not going to get turned around," Conley said. "There’s compelling evidence that’s not going to happen."

Current law allows voters to request a mail-in ballot up to five days before Election Day. They must be returned by 8 p.m. on Election Day to be counted. The U.S. Postal Service recommends mailing ballots one week before they are due.

Plaintiffs in the lawsuit are also asking Conley to lift a requirement that people submit an electronic copy of their voter ID when they request their mail-in ballot online. They argue some voters aren’t familiar enough with technology to meet that requirement.

"Those who have no technological savvy may well find it very challenging," the judge said.

Other requests by plaintiffs include lifting a witness signature requirement on ballots, allowing clerks to feed ballots into voting machines before Election Day and lifting county residency requirements for poll workers.

Meagan Wolfe, head of the Wisconsin Elections Commission, testified before the court that a statewide poll worker shortage is her biggest concern ahead of November’s election.

"I do believe finding poll workers will be a challenge as we head into November," Wolfe said.

Milwaukee election officials said a shortage of poll workers contributed to the city only opening five polling places for April’s election, rather than the 180 that is typical.

According to survey results released by the Elections Commission earlier this week, local election officials across the state are at least 900 poll workers short for the August 11 partisan primary.

The legal arguments come as the number of mail-in ballots requested for August’s election has already set records.

"This is a sea change in voting," Conley said.

However, the judge shared his view that speculation on the status of the virus in November, as well as voters’ future behavior, is a "mixed bag" and noted "a federal court has a limited role in these matters."

Lawyers for the GOP-controlled state Legislature, Republican Party of Wisconsin and Republican National Committee said existing Wisconsin laws are sufficient in allowing everyone to exercise their right to vote, even amid a pandemic. They argued voters have ample time to request and return mail-in ballots and that in-person voting locations will be available for those who are comfortable with that option in November.

Though political experts have a close eye on anything that could affect voter turnout numbers in Wisconsin, which is seen as a critical swing state in November, Conley warned lawyers against mentioning that as part of their arguments.

"I hope no one is going to get on a grandstand and tell me about the larger implications of the presidential election," Conley said. "The questions here are purely ones of whether or not COVID-19 is impacting the ability of election officials to conduct this election and vindicate the rights of voters."

Conley could issue his ruling any time. That ruling could be immediately appealed or halted by a higher court.