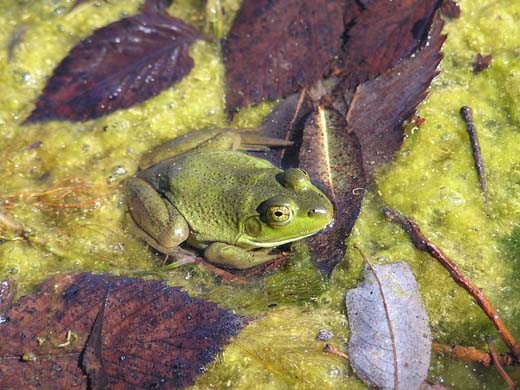 Phenology is the study of when different natural events occur each year, like when the first American Bullfrog is heard. Photo courtesy of Rori Paloski.

It’s common to perceive some natural event — like migrations, a first frost or a final snowfall — as “early” or “late.” In fact, tracking cycles of nature is a critical part of what's known as phenology, a science that dates back to at least the 19th century and that has deep roots in Wisconsin.

Specifically, phenology is “the study of the timing of seasonal events,” according to Stan Temple, a professor emeritus in conservation at the University of Wisconsin-Madison. Temple is also a senior fellow with the Aldo Leopold Foundation, an organization whose namesake wasn't only a Wisconsin legend, but also a dedicated phenologist .

Temple said that Leopold, who is known and revered as a Wisconsin ecologist and conservationist, began making his own phenological observations and records at the age of 8.

“His daily journals were essentially accounts of what he saw during his time out in nature,” said Temple.

Incredibly, Leopold continued those records “literally until the day he died in 1948,” Temple said. The entries for the years 1935 through 1948 are of particular interest to scientists and scholars, since they mark the time when Leopold and his family meticulously tracked natural events at “the shack,” their weekend retreat near the Wisconsin River.

Leopold not only saw the scientific value of phenology, but enjoyed it as well.

“Keeping records enhances the pleasure of the search, and the chance of finding order and meaning in these events,” he once wrote.

Back in Leopold’s era, binoculars, a notebook and a pencil were the main tools to practice phenology. Temple said that today, technology has become a great aid. Smartphones and other digital tools allow citizen scientists to record and share their observations by uploading them to central databases.

The USA National Phenology Network is one such database that focuses mainly on plants. But the biggest collaborative resource, “the 300-pound gorilla,” according to Temple, is eBird — a database that itself has Wisconsin ties.

The eBird site, run by the Cornell Lab of Ornithology, has revolutionized how information is collected and disseminated about birding observations. Temple said that each day there are thousands of birders across the country who share their sightings. For example, Wisconsin residents who would like to see a snowy owl can access a dynamic map of recent sightings in the Upper Midwest.

The database that is not only utilized by many Wisconsin birders, but in fact originated in the state. Temple said that when he joined the faculty at UW-Madison in 1976, he created a program called the Wisconsin Checklist Project. That state program was eventually expanded and became the national eBird project.