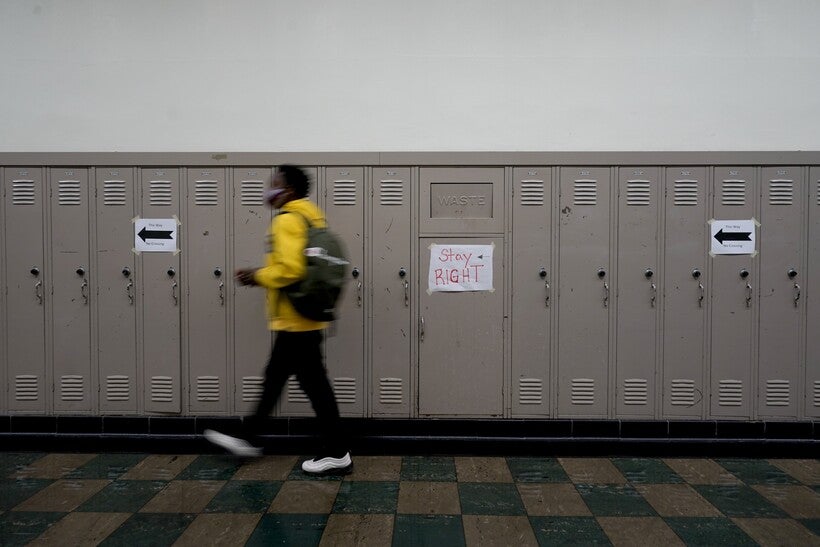 A student walks on the right side of a hallway to avoid contact with other students at Wyandotte County High School on the first day of in-person learning at the school in Kansas City, Kan. Wednesday, March 31, 2021. The district was one of the last in the state to return to the classroom after going virtual due to the COVID-19 pandemic. Charlie Riedel/AP Photo

School Leaders: Masks Are Here To Stay At Least Through The End Of School Year

Though The Supreme Court Struck Down Statewide Mandate, Many Schools Will Keep Mask Policy
By Madeline Fox
Share:

While supervising a lunch period on the third day of the school year, Cornell superintendent Paul Schley said he saw a fifth grader trying to eat while still wearing his mask.

"He totally forgot he had it on already," said Schley. "You know, they get used to it."

Still, Cornell’s mask policy hasn’t gone over well with all of its families. Schley said at the beginning of the year, about 10 percent of the families in his district opted to homeschool their kids or send them elsewhere rather than comply with the mask requirement in Cornell schools.

Even with the statewide mask mandate overturned by the Wisconsin Supreme Court last week, Schley said Cornell will keep its mask requirement in place until the end of the school year, which will wrap up in mid-May. However, he said, the district is considering lifting the requirement for prom and graduation.

The prom, usually in April, is May 15 this year — the day after Cornell’s school year wraps up.

Schley said the fact that it’s after classes end, and at a time of year when the weather’s more likely to allow them to keep all the doors and ceiling vents in the school gym open during the dance, have him leaning toward allowing students to attend without masks — as does his suspicion that it won’t be much of a difference from the risks students are already taking.

"A lot of the students in high school, if they’re going to prom together, I’m guessing they probably haven’t been doing a very good job social distancing already," he said. "I’ve told the class that, right now plan on (masks), but we may not make you wear them."

The invalidation of the statewide mandate has left masking decisions in the hands of county, city and school district authorities, resulting in a patchwork of policies across the state. However, most school districts wrote a mask requirement into their reopening plans, in accordance with guidance from the state Department of Public Instruction.

Even rural districts, more than half of which said they would not require masks in a July survey, largely adopted mask policies before the school year started, said Kim Kaukl, Wisconsin Rural Schools Association executive director. Kaukl hasn’t heard of any association member schools planning to drop their mandates in response to the court’s ruling.

Wisconsin Rapids Public Schools, which were the site of a Centers for Disease Control and Prevention-supported study on coronavirus spread in schools, plan to keep their mask mandate not only through the end of this school year, but likely into next fall, said superintendent Craig Broeren.

His district sent a letter to parents after the court ruling reinforcing that point, which he said they also did earlier this school year when the Wisconsin Legislature knocked down an earlier statewide mask mandate — only for Gov. Tony Evers to immediately issue a new one.

Broeren said families have been reasonably accepting of the schools' rules on masking, though he notes a few reached out after the statewide requirement was overturned to assert that their kids no longer had to comply — to which he responded that they would, under district rules. He’s prepared to get a handful of additional complaints as schools return from spring break.

Cases have also dropped dramatically in Wood County, home of Wisconsin Rapids, from their fall and winter peak, which Broeren noted may also make families a little more restless about COVID-19 restrictions.

"That’s the other thing we’re probably going to have to battle too, is, 'Oh, there’s not that many cases. Why do I have to wear them?' It’ll be that kind of nonsense," he said.

Broeren acknowledges that, especially with cases down and vaccinations rising, it’s hard to pinpoint exactly when masks won’t be necessary. For Wisconsin Rapids, he said that will probably come when children are approved for the COVID-19 vaccine.

Schley, the Cornell superintendent, said he’s expecting his district won’t require masks during summer school, since fewer students and nice weather will make it easier to distance and ventilate. Next fall, too, he’s expecting the district won’t make masks mandatory. He said that’s what he’s heard from other superintendents as well: masks through the end of the year, maybe not over the summer, and likely not in the fall.

"I do support the use of masks, but I do know at some point we’re not going to keep doing it — there’s got to come an end," he said.