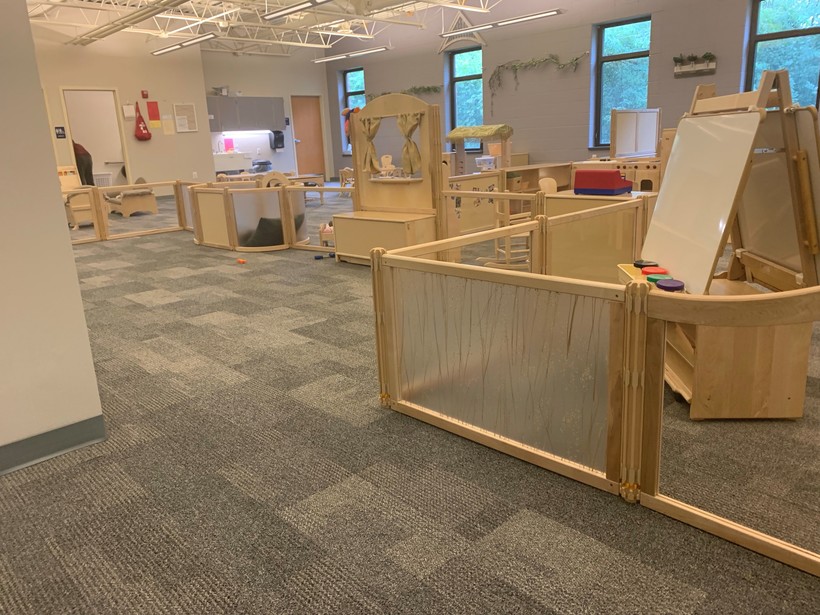 Glenn Schilling heard from parents of students in the Hartland Lakeside School District that high-quality, structured child care was hard to come by. The best ones were filling up fast.

As superintendent of a district with 25 percent of staff either expecting a child or parenting an infant or toddler, Schilling was also realistic about losing teachers to what's been deemed an exodus from the profession. At his district, he worried stresses from teaching, parenting and child care would make leaving the job a more viable option.

So the district opened Lakeside Academy in August with an enrollment of 50 children, and more are on a waiting list, to meet the call for structured child care and give teachers an incentive to stay.

More than accessible child care, enrolling their children in the academy means principals, teachers and other certified staff are reimbursed 50 percent of the standard cost with money set aside in a separate fund within the district. The district estimates making $100,000 from the day care, and will pay out about $60,000 in benefits, Schilling said.

The deliberate attempt to keep certified staff on board is a welcome change for Heather Grindatti, principal of Hartland North Elementary who has one daughter enrolled in the day care.

"For me and my family, it's been a huge blessing," she said.

To comply with state requirements, children's family members are alerted to their behavior by staff, such as when the child naps, engages in activities and gets a diaper changed.

Hartland Lakeside's child care center takes children as young as 6 weeks old. For more than six hours of care five days a week, the day care charges $295 for infants and toddlers 6 weeks to 2 years old; $260 for 2- and 3-year-olds; and $230 for 3- and 4-year-olds. Prices vary based on how many days and hours kids are in day care. Average day care prices in the state are around $223 a week for an infant.

Schilling said these prices are comparable to other day cares, noting that quality, not cost, was a primary goal of it being established.

"For the teachers who are utilizing it, there's a little bit less anxiety and stress," Grindatti said of her staff. "I feel that way just knowing (my daughter) is in a quality place with people that love her."

Despite its newness for Harland Lakeside, which is located in Waukesha County west of Milwaukee, putting a day care inside of a school isn't new to Wisconsin. Data from the Wisconsin Department of Children and Families show that throughout the state there are 188 certified day cares in public schools. Most of them — 110 — are in Milwaukee County. Dane County has the next highest with 14.

The child care shortage is palpable. In 2017, the areas of Delafield, Hartland, Chenequa, Merson, Lake Five and North Lake saw 1.3 children younger than 5 years old for every potentially available slot, whether for in-home care or at day care facilities.

Hartland North Elementary kindergarten teacher Lisa Nekich, who has a 2-year-old in the day care, said she knows former teachers who decided to take at least a few years off to raise their children when the search for affordable day care became too burdensome. Nekich, too, did that for two of her six children while she worked at Milwaukee Public Schools.

She said quite a few of the pregnant teachers in the district are taking or plan to take advantage of the day care.

"It's the most amazing thing in the world that (the district) would consider doing something like that," she said, noting that the reimbursement benefit feels like a raise.

The Cambria-Friesland School District opened their own day care center called the Child Enhancement Center at Cambria-Friesland in 2016. Amanda Swisher, the day care's director, said participation has been steady, with 67 children enrolled this year — below the capacity of 94. The school district, about 40 miles northeast of Madison, enrolls 450 kids.

"They are very thankful for it," Swisher said of parents' responses. "There's not really anything in the area."

The Child Enhancement Center accepts children ages 6 weeks to 12 years old. Most of the children attend school in the district, so day care staff can shuttle them to class each day. The day care was constructed out of a former kindergarten classroom.

Hartland Lakeside's child care center is located in the north wing of Hartland South Elementary. That space was previously vacant because the district had disbanded the charter school that formerly occupied it.

Cost to convert the space to a day care was minimal, Schilling said. Adding parking spaces turned out to be the costliest item at $30,000. Schilling said that although there's capacity for about 100 kids, the district wants to ensure there's enough space for kids to play. He said even if enrollment is increased, it won't surpass 75.

"We want to do more, and in the school system we have the resources," Schilling said. "We can provide to the community to give them other things that parents need."