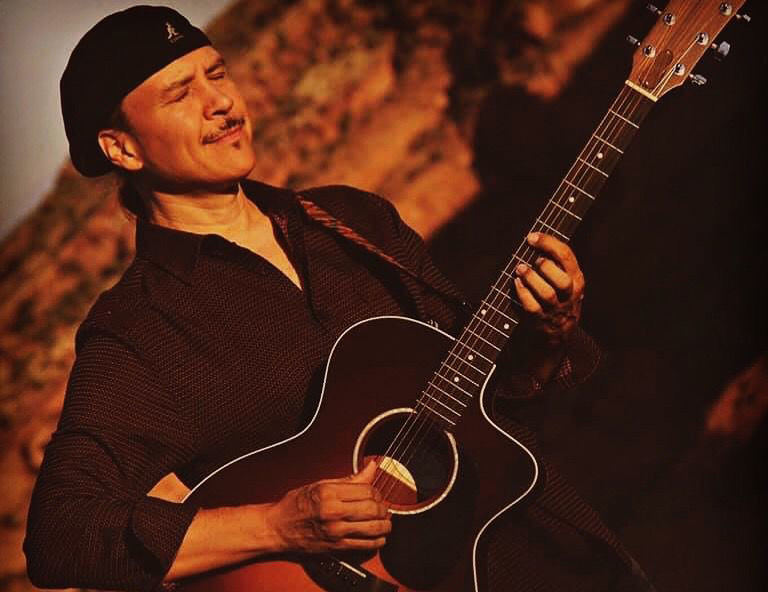 Roots Musician Wade Fernandez Honors The Past To Ensure The Future

For Wade Fernandez, music is a way of honoring the past while also ensuring the future. A roots musician and member of the Menominee Nation, Fernandez’s song, "Sawaenemiyah (Blessed)" is the "Simply Folk" download of the month for November.

During his 2017 interview and studio performance for "Simply Folk," Fernandez performed the song, which is entirely in the Menominee language.

He said he wrote it to help preserve the language, because, "our language is a very threatened language. It's considered a dying language. We have only a handful of original speakers left of our language. Those are elders and they're reaching the age where they're not going to be around too much longer. Fortunately, we have a few young people that are studying (the Menominee language)."

Fernandez added that the song is "to honor the language, honor our ancestors that strived and went through boarding schools and went through all these things that tried to strip the language away, and kept it enough alive enough to at least be able to share it right now."

Fernandez’s music is the product of a lot of different influences, including silence. Growing up on the Menominee Reservation, located about an hour’s drive northwest of Green Bay, he lived miles away from the nearest village.

"There was a lot of silence up in the forest. I couldn't see neighbors," he said. "And so I spent a lot of time as a kid sitting by the rivers, sitting by the lakes, walking and listening, and when I started to play music, I'd bring my guitar out there and play it by the water."

"My parents had a record collection of the Beatles, Rolling Stones, Otis Redding and just all kinds of stuff," Fernandez recalled. "So, I had all these different styles. And then the powwow music, the ceremonial music on the reservation … So I guess (my music) would be called roots music, but with all these influences coming in."

"It was finding those little nuggets," he added, "where there's passion and fire and emotion and all these things going through the music. And then it was like, OK, this is too beautiful to pass up this genre. And so then I would get influenced by that."

Music is not only central to Fernandez’s life, but also to his family story. His grandfather came from Mexico, and ended up working in the logging camps on the Menominee Reservation, where he met Fernandez’s grandmother.

"He met my grandmother, and he spoke Spanish. She spoke Menominee, but they were both musicians," said Fernandez.

As a tribute to them, he incorporates Latin influences in his music, including a piece played on a flamenco guitar with lyrics that reflect his Menominee heritage.

Despite his career of playing both in the United States and around the globe, Fernandez has had to overcome a natural shyness about himself and his music.

"Our traditional people, a lot of them were very shy, and we weren't very outgoing, and we were taught in our culture to be humble about things," he said. "So for me, it took a long time to overcome my shyness and my insecurities in order to put out the music in the strongest way I could."

But now, Fernandez added, he works to "reframe those things and think, well, my gift and my role as a human being is to share those gifts. And if I don't share them because I'm too shy or I'm insecure about my technique or my whatever, I'm doing a disservice to those gifts and to the purpose of them. So I just need to open up to that gift of music. And I’ve got to be like a faucet. OK. Now I turn it on and I step out of the way and deliver it."

Song of the Black Wolf

Song of the Black Wolf

Journey of the Heart

Journey of the Heart