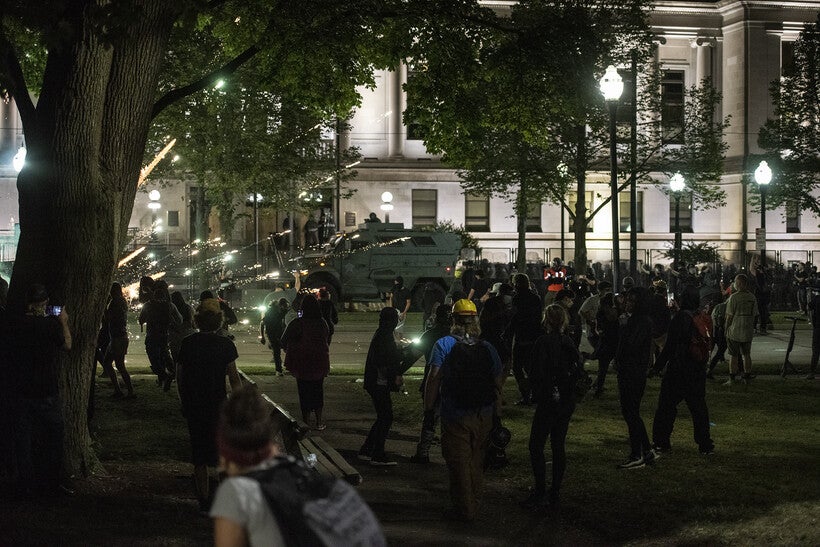 Protesters gather in front of the courthouse Tuesday, Aug. 25, 2020, in Kenosha. Angela Major/WPR

Legal Team Says The 17-Year-Old Was Protecting Himself From Protest 'Mob'
By Alyssa Allemand
Share:

The legal team for Kyle Rittenhouse, the 17-year-old charged with intentional homicide and reckless homicide in the fatal shootings of two people during protests Tuesday in Kenosha, says he acted in self-defense.

The Milwaukee Journal Sentinel reported that the law firm Pierce Bainbridge sent out a news release Friday that said they will fight the charges against Rittenhouse, claiming he was defending himself from a "mob" of attackers who were protesting against the police shooting of Jacob Blake.

According to the Journal Sentinel, the release said that before Rittenhouse fired his gun, he was "accosted," "verbally threatened and taunted" by "rioters" while he guarded a mechanic’s shop alongside a group of armed men.

Said "rioters" started chasing Rittenhouse, the statement says, and while running he heard a gunshot behind him. The release says when Rittenhouse turned, he was confronted with "an attacker lunging towards him and reaching for his rifle."

Rittenhouse then shot and killed 36-year-old Joseph Rosenbaum, who was unarmed, according to the criminal complaint.

Following the shooting, says the account, "a growing mob" chased Rittenhouse. When he fell, people "kicked" him and "bashed him over the head with a skateboard," says the release.

"In fear for his life and concerned the crowd would either continue to shoot at him or even use his own weapon against him," the statement says, "Kyle had no choice but to fire multiple rounds towards his immediate attackers."

Another gunshot from Rittenhouse killed 26-year-old Anthony Huber, who was holding a skateboard in his right hand and reached for Rittenhouse's gun with the other, the release says. Rittenhouse also shot Gaige Grosskreutz, 26, in the arm. The Kenosha County district attorney said in his criminal complaint against Rittenhouse that it appeared Grosskreutz was carrying a handgun at the time he was shot.

An Illinois judge on Friday postponed until Sept. 25 a hearing to determine whether Kyle Rittenhouse should be returned to Wisconsin.