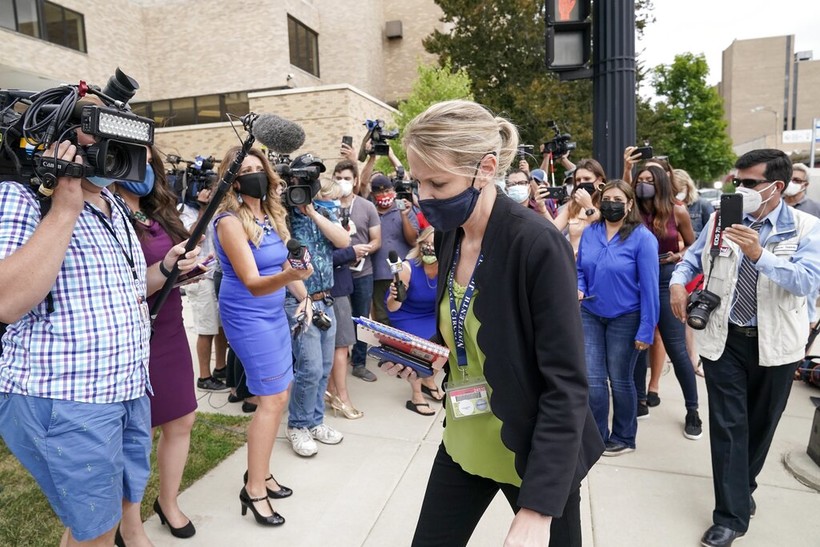 Kasey Morgan, a public information officer for the Lake County Court, walks away from reporters outside the Lake County courthouse following the extradition hearing for Kyle Rittenhouse Friday, Aug. 28, 2020, in Waukegan, Ill. A judge agreed Friday to delay for a month a decision on whether the 17-year-old from Illinois should be returned to Wisconsin to face charges accusing him of fatally shooting two protesters and wounding a third during a night of unrest following the weekend police shooting of Jacob Blake in Kenosha. (AP Photo/Morry Gash)

A judge has agreed to delay for a month a decision on whether a 17-year-old from Illinois should be returned to Wisconsin, where he faces charges of fatally shooting two protesters and wounding a third.

Kenosha County District Attorney Michael Graveley filed six charges against Kyle Rittenhouse, of Antioch, Illinois, including two counts of first-degree murder and one count of attempted first-degree murder. Rittenhouse was also charged on two counts of recklessly endangering safety with a dangerous weapon and a minor in possession of a dangerous weapon.

A legal team from the #FightBackFoundation said it will represent Rittenhouse. Lawyer L. Lin Wood helped establish the foundation. Wood helped Covington Catholic student Nick Sandmann sue CNN, the Washington Post and other outlets in 2019 after videos of him and his classmates interacting with protesters outside the Lincoln Memorial in Washington, D.C. went viral.

Wood tweeted that Rittenhouse will be represented by attorney John Pierce, along with local attorneys. Wood is soliciting donations for Rittenhouse's representation and "to support conservative causes" through the #FightBackFoundation's newly created website. That follows other efforts to fundraise for Rittenhouse.

The two men killed were identified as 36-year-old Joseph Rosenbaum of Kenosha and 26-year-old Anthony Huber of Silver Lake. A third man, 26-year-old Gaige Grosskreutz of West Allis, was injured. GoFundMe fundraisers have been set up for Huber's family and his significant other, and another for Grosskreutz's medical expenses has collected over $30,000 by early Friday afternoon. One for "JoJo" Rosenbaum had raised nearly $17,000.

An Illinois judge on Friday postponed until Sept. 25 a hearing to determine whether Kyle Rittenhouse should be returned to Wisconsin.

Rittenhouse had been walking around Kenosha during protests on Tuesday night illegally carrying an assault weapon.

Subsequent nights of protests have been quieter. A vigil is planned for Friday evening, and protests are scheduled for the weekend.

The Chicago branch of the Bureau of Alcohol, Tobacco, Firearms and Explosives, which covers parts of Illinois and Indiana as well as eastern Wisconsin, tweeted that it has deployed to Kenosha to investigate recent arsons.

The Kenosha County Sheriff's Office announced that it will hold a press conference at 1 p.m. with city and county leaders and law enforcement officials.

Editor's Note: This story will be updated.