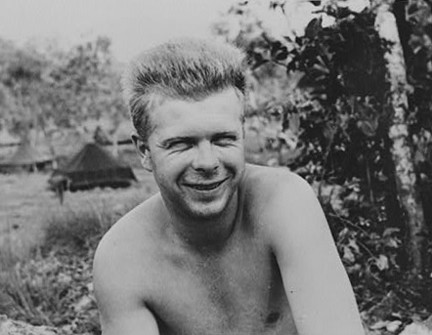 America's leading fighter pilot in World War II may have a nice Wisconsin farm boy, but Richard Bong was a deadly combat pilot fighting in primitive conditions in the South Pacific.

Bong was assigned to a jungle airstrip at Dobodura, New Guinea. Ralph Wandrey of Iowa was Bong's wingman. He remembers a grass strip 10,000 feet long between a 13,000 foot high mountain range and the jungle.

"Behind us were a swamp and a rainforest which our camp was located in," Wandrey says. "This was about, oh, I would guess eight to twelve miles deep. And it was inhabited by 20 foot crocodiles and 22 and longer foot pythons. Not a good place to go down. And on the right was the Pacific Ocean. Two miles ahead of our airplanes where we parked 'em, was the Japs' front lines. I spent the first four months, we didn't fly an offensive mission. We just tried to keep the Japanese from blowing us off the face the Earth. This was Dobodura."

As Bong's fame grew, Wandrey says so did the stories about him, including one that Bong killed a crocodile to save a fellow pilot who crash-landed in a swamp. Never happened.

Bong tent-mate and fellow pilot Walter Markey of New York says they all came back from missions with bullet holes in their fuselage. Markey knocks on the table and says the sound of getting hit was unforgettable.

"If you didn't get too many it's just like 'ting ting ting ting'," he says. "When you turned around you saw somebody firing at you."

Bong's crew chief at Dobodura was Sergeant Elwood Bardon of Alabama. He was the one to fix the damage from the bullet holes. He says working with Bong was unique.

"One time he came in, you know the crew chiefs always jumped up on the airplane to know if they made contact or anything like that," he says. "So I jumped up there on the wing and I said 'Major, you do anything?' He said 'Yeah, I think I got four. But you might better check my tail section back there. I think I got hit.' I went back there and the left side of that was almost shot off."

"When Dick saw an airplane, an enemy plane, he was just like a hound dog on the trail of a rabbit. The rest of the world was gone until he got that plane."

1943 was a time when a bunch of young, single fliers had to learn fast. The experience earned Wandrey the nickname "Iron Pants". Wandrey says his P-38 was shot up during a raid on the New Guinea Japanese naval fortress of Rabaul. He did get back to Dobo, but crash landed.

"Then I caught a ride back into camp," he says. "Well, Dick was sitting at the table in the mess eating. And I walked in and I saw the color just drain out of his face when he looked up. He said, 'Wandrey! What in the heck are you doing here?' I said, 'I came here to eat. What do you think?' He said 'We saw you crash and burn at the end of the strip.' I said, 'Well, I hate to disappoint you, but here I am and I'm hungry.' And he said, 'Well, I suppose you want your jacket back, then.' I looked and here was 'R. H. Wandrey' on the jacket there. They had already divided up all my clothes!"

He says he got everything back except his bed sheets.